Russia's Next Crisis: A Brain Drain? 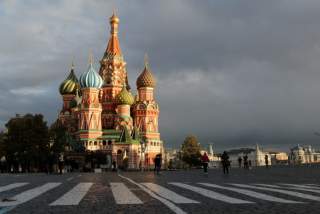 It has become a race to the bottom on projections of just how stagnate the Russian economy is and on how much money it is losing. As the state of anarchy and blame game over Ukraine continues, Russia continues to hemorrhage capital and investments. Sanctions have had a dramatic impact on investment in the country along with its growth projections as businesses, and countries, continue to be unnerved by the continuing fighting and uncertainty of further sanctions.

Yet they have not been forceful enough to stop Putin, and the full story of just how badly the Russian economy is doing has yet to be fully told as projections and outflows continue to change weekly. The IMF has just released new projections for Russian growth that are less than enthusiastic: GDP growth rates have been revised to 0.2 percent from 1.3 percent this year and to 1 percent from 2.3 percent next year. This—combined with the massive capital outflow that Russia has experienced since the beginning of the Ukraine crisis (which by some accounts, could be larger than reported. Even possibly $220 billion according to ECB head Mario Draghi) and the potential for Russia to be locked out of EU capital markets, among other measures under discussion by the EU—has understandably unnerved many investors and affected the economic outlook for Russia.

Yet, despite all the sanctions, Russia’s $2 trillion dollar economy still needs to be considered in a wider context. It still retains massive reserves (around $470 billion), along with having an enviable debt to GDP ratio (13.41 percent). Additionally, its own Asia pivot has seen some positive gains in recent months, including the signing of a massive thirty-year, $400 billion natural-gas deal.

That is why many commentators deride sanctions and their ability to impact the Kremlin’s decision-making process. Sanctions by themselves are very unlikely to forcefully change Putin’s calculus in Ukraine. However, they are not meant to have the same force as NATO’s tanks. Sanctions are designed to create a climate of instability and to increase the costs for continued courses of actions so that the decision makers and elites force Putin to change course themselves. It is a longer-term strategy that goes beyond short-term damage assessments.

And while Russia’s economy continues to muddle through in a mire of uncertainty, a far more damaging and long-lasting trend has emerged. It is not just capital and investment that is fleeing the country, but some of Russia’s best and brightest minds.

Yet these are not just political activists and opponents of the Putin regime that are emigrating. These are the small- and medium-business owners and entrepreneurs, economists and scientists who are afraid of the increasingly constrictive Russian society. These are the people who are the true engines of growth for the Russian economy, and the people needed to rejuvenate the dormant entrepreneurial spirit that would diversify the moribund economy from its reliance on commodities.

The most prominent example of this is the former rector of the New Economic School in Moscow, Sergei Guriev (another example is the founder of Russia’s version of Facebook Pavel Durov). As Russia’s most famous and internationally respected economist he had succeeded in turning the Moscow School of Economics into an internationally recognized institution along with advising the government on a multitude of issues. However, his advice struck too close to the levers of power when he participated in an independent probe of whether the formerly jailed oil tycoon Mikhail Khodorkovsky was unfairly jailed. The probe decided he had been. And with that, the all-too-familiar signs of an ominous interaction with the government was assured as investigators began turning up at his offices and asking for documents over a potential conflict of interest in the Khodorkovsky case. He soon fled to Paris out of fear for what would come next if he stayed. In his own words, he was not a political refugee, just another one of Russia’s brightest minds fleeing the country for speaking out too loudly. “I have never been a politician, and I am not a political refugee. I left Russia for personal reasons: I personally prefer to stay free.” Even prominent Russian journalist Leonid Bershidsky described his emigration as one of “disappointment” and not opposition.

This is a worrying sign, even as Putin continues to enjoy 80-percent approval ratings. And while the Russian “middle class” has surpassed 40 percent of the population, it is not the middle class of the Western conception. In Russia, the middle class is comprised primarily of employees of the state or public sector, which accounts for 50 percent of the economy and employs some 25.7 percent of the active working population. That is why today’s émigrés are all the more important—they have higher educations and are the engines of innovation and growth that Russia can ill afford to lose as it is increasingly isolated from the rest of the World.

And without people like these, Putin’s Stalin-like “four-year production plan” to boost labor productivity and ignite a “technological revolution” that will serve to energize the economy are more than likely to fall short. This—combined with his calls for further support of the arms industry to produce more “high-end jobs”—is not encouraging for the diversification of the Russian economy.

To be sure, some are merely looking to safeguard their economic assets as a result of Crimea and Ukraine and are not concerned with the societal climate. Yet, this force had been building long before Crimea. As Marc Bennetts noted in an article for Vocativ,

Russia’s latest brain drain began in earnest last year after it became clear that the grassroots opposition against Putin had failed to force political and social change. Some six months earlier, as Putin made his controversial return to the Kremlin, some 80,000 protesters had filled central Moscow to rail against his inauguration.

Unfortunately for Russia, this emigration is far more damaging and will have much longer-lasting repercussions than the capital flows that will always find a willing banker or lawyer to turn the tap back on.

Andrew S. Bowen is a columnist for The Interpreter, a Russian-language translation and analysis journal. He is also a Ph.D student in Political Science at Boston College and a researcher for the geopolitical consultancy Wikistrat. You can follow him on Twitter: @Andrew_S_Bowen.