Russia's Next Move in Syria: Ignore, Escalate, Distract, or Détente? 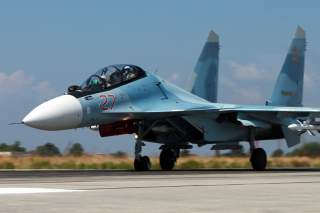 One golden rule of statecraft is: don’t bluff. A close second is: be ready when someone calls it. Both Barack Obama and—now—Vladimir Putin have encountered these rules in Syria. Last week’s missile strike against Syria was more than a display of American firepower. It flipped the logic of Putin’s Syrian military adventure on its head. Overnight, the calculus of Russia’s gambit in the Middle East went from “win-win” to “lose-lose.” The U.S. missile strike has left Putin on a high ledge. His options are almost all bad for climbing down.

Back in 2012, former President Barack Obama set a dubious standard for superpower bluffing by asserting his infamous “red line” on the use of chemical weapons in Syria. There was, in fact, no line. When Syrian strongman Bashar al-Assad called this bluff, he showed that American words rang hollow. This is why bluffing is a bad move for presidents. As President Theodore Roosevelt explained over a century ago, “The one thing I won’t do is to bluff when I cannot make good; to bluster and threaten and then fail to take the action if my words need to be backed up.”

By failing to enforce his own bluff, Obama signaled that a power vacuum was forming around Syria—one that Putin subsequently filled. Absent the United States, the Kremlin could burnish its great-power credentials as an arbiter of outcomes in Syria, prop up its client Assad, and demonstrate that Washington talked—but Moscow acted. This too was a bluff, as the Kremlin was only exploiting the easy opening of Obama’s broken “red line.” Moscow never intended to risk a direct military conflict with Washington over Assad or the Middle East.

Originally, the broken “red line” had a deceptive appeal to Russia. With the Americans on the sidelines, Russia could climb up the ladder of military escalation in the Middle East at relatively low risk and low cost to its interests. Fringe benefits also abounded. In Syria, Russia could field test its new generation of high-tech arms and hardware, showcasing the success of its ongoing military modernization. Eventually, the Americans might be enticed into some form of official cooperation with Russia against ISIS in the Levant. This would probably force American acceptance—however grudgingly—that Assad had a future. And in the best of all possible upshots, American cooperation against ISIS might even force Washington to put its objections to the Ukraine war on the back burner. In the playbook of international gambles, Syria was a win-win.

Except that Syria was always a side bet. Russia’s primary strategic interest is—and always has been—the European theater. Here, Russian leaders have long regarded the American-led security order as unnatural, outdated and unfair. It is in Europe where Russia sees its greatest threat vector: America’s “besieging” Atlantic alliance. And it is in Europe where the Kremlin seeks to roll back the post–Cold War settlement of the East. Russia’s overarching aim: force Western acquiescence to its claim of a privileged sphere of influence. This sphere is undefined, but in Russia’s worldview, it exists somewhere in the geopolitical purgatory between Berlin and Moscow. It is in Europe where Russian leaders are willing to escalate into a larger conflict, and fight there if needed—not in Syria.

The trouble with small powers is that they can pull a great power into a war that it neither wants nor wins. By using chemical weapons against civilians, perhaps with Russia’s assistance or quiescence, Assad once again flaunted the American “red line.” Only this time, President Donald Trump actually enforced it. This was a counter-demonstration and major pattern break by the Americans. Unlike Obama, the bombardment of Assad’s Shayrat Air Base showed that Trump was willing to project power in Syria. It also signaled that Russia would no longer enjoy easy options in the Middle East.

The U.S. missile strike has kicked the escalatory ladder out from under Russia. This has left Moscow on a very high—and suddenly more perilous—ledge. Its outlook is “lose-lose.” The low-risk, low-cost side wager in Syria is now a very high-risk, potentially high-cost proposition. Putin has very few good options for his next move. Here are four:

Option 1: Ignore the problem. Doing nothing is always an option. However, this one comes at the cost of weakened Russian credibility (a sizable negative) in the eyes of Syria, Iran, China and other Middle Eastern powers. Yet another reason for not bluffing. An added downside of ignoring the problem is embarrassment at home. This could cause a potentially serious hit to Putin’s domestic political stature. Losing face in the eyes of foreign clients, restive rivals, the Russian people—let alone his own power centers—is ill advised for Putin and potentially dangerous.

Option 2: Escalate. If you can’t climb down, keep climbing up. Escalation is the most nihilistic option for Moscow, as it moves Russia closer to a major conflict with the United States. Russia’s military doctrine seeks to avoid this outcome at very high costs. Unfortunately, the chances of an unwanted war are greatest at the higher tiers of the escalatory ladder. This is where Putin presently finds himself. The Kremlin’s immediate response to the strike, deploying its own form of gunboat diplomacy in the Mediterranean, hints at early escalation. However, Russia’s economy is not prepared for a major war. Its military modernization program is unfinished. Escalation would likely end badly for Putin.

Option 3: Distract. A middle option between “ignore” and “escalate,” this option could take many forms. The key for Russia is to swiftly steer global attention away from Syria by focusing it elsewhere. For Russia, the most immediate options for distraction are to intensify the conflict in eastern Ukraine, or to rattle NATO defenses in the Baltic or Black Sea regions. The trouble with “distract” is that it incurs partial costs from both the “ignore” and “escalate” options. Distraction will neither solve Putin’s overall credibility problem on Syria, nor entirely eliminate the risk of a wider conflict with the West.

Option 4: Détente. Blessed are the peacemakers. The easing of tensions with the United States is obviously the best pathway for Russia. It diffuses the immediate chance of an unwanted conflict and transforms any lingering perceptions of Kremlin weakness into cheers for its sage statecraft. Russia’s 2015 dust-up with Turkey over the shooting down of a bomber gives us the template for détente. After a pro forma episode of saber-rattling from Moscow comes the eventual coming to terms. “Détente” is the escape chute: everyone gets down safely from the ledge of escalation. However, this option must never be confused with normalization. Détente is only the first step. Normalization comes years later in the process.

As the smoke clears, there should be no doubt that the U.S. missile strike against Syria was measured, meaningful and needed. And all signs indicate that the performance of Trump’s national-security team was exceptional. This was an added bonus, since the composition of the team is still new. Trump’s counterdemonstration in Syria also shows why it is wildly beneficial for democracies to regularly change leaders; and why it is detrimental for authoritarian ones to never leave. When an authoritarian state leverages itself into a dangerously escalatory position, as in the case of Syria, it can be exceptionally difficult to unwind once the facts change. The next move will now fall to Putin. Let’s hope he opts for an escape chute.

Peter B. Doran is Executive Vice President of the Center for European Policy Analysis (CEPA) in Washington, D.C. He writes about guns, oil, and freedom @PeterBDoran.