Russia's next Power Play May Occur in Yemen 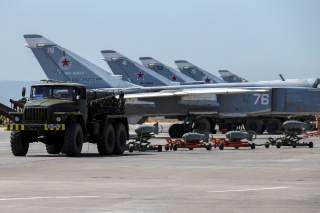 Since the start of the Astana talks on Syria in December 2016, Western analysts have paid a great deal of attention to Russia’s emerging role as a conflict mediator in the Middle East. The scrutiny surrounding Russia’s arbitration ventures in Syria has sparked a flurry of predictions on the next Middle Eastern security crisis where Moscow will assume a leading diplomatic role. The most frequently discussed potential theaters for a Russian diplomatic intervention are Libya, the Qatar crisis and the Saudi Arabia-Iran standoff.

While intervening in each of these three regional crises provides opportunities for Russia to expand its geopolitical influence in the Middle East, Western policymakers have paid strikingly little attention to the prospect of a Russian diplomatic intervention in Yemen. This omission is short sighted. The Yemen conflict possesses a unique confluence of characteristics that are highly conducive for a Syria-style Russian diplomatic intervention, and provides Vladimir Putin with a low cost opportunity to highlight Moscow’s leverage in the Middle East.

Russian policymakers view Yemen as an appealing destination for a diplomatic intervention, because they believe that Saudi Arabia is willing to end hostilities in Yemen if it is offered acceptable terms. Saudi Foreign Minister Adel al-Jubeir confirmed this assessment during his recent visit to Moscow. In response to questions from Russian reporters, al-Jubeir insisted that Saudi Arabia wants a diplomatic settlement in Yemen that forces all warring parties to comply with UN Security Council Resolution 2216, an April 2015 resolution that called for the end of the Yemeni civil war.

Rising antiwar sentiments within the Saudi political establishment can be explained by deteriorating conditions on the ground in Yemen. The absence of a major Saudi strategic victory in Yemen since the fall 2015 seizure of Aden has convinced Saudi policymakers that the Yemen conflict has descended into an intractable stalemate. Saudi Arabia’s attitude of resignation in Yemen has intensified considerably since Qatar withdrew from the Gulf Cooperation Council (GCC) mission in June and the United Arab Emirates (UAE) began launching strikes on al-Islah, a Saudi-aligned Yemeni Muslim Brotherhood organization.

For a durable political settlement to be reached in Yemen, Riyadh will need to coordinate with an external great power mediator, as regional actors, like Kuwait and Oman, have exhausted their diplomatic options. This mediation vacuum provides an excellent opportunity for Russia to showcase its diplomatic prowess by facilitating the resolution of the Yemen conflict.

Russia’s case to assume a leading mediation role in Yemen rests on two distinct advantages. First, since the inception of the Saudi-led military intervention in March 2015, Russia has maintained a cooperative relationship with all major political stakeholders in Yemen. Unlike the United States, which overtly aligned with Saudi Arabia during the early stages of the conflict, Moscow immediately declared its support for a peaceful resolution to the Yemen civil war. In April 2015, Russia condemned Saudi air strikes in Yemen, and expressed support for an all-inclusive United Nations arms embargo against warring Yemeni factions.

Even though Saudi Arabia’s military intervention in Yemen has transitioned into a protracted conflict, Russia has maintained positive relations with leaders on both sides of the civil war. To demonstrate its commitment to all-inclusive diplomatic dialogue, Russia retains an embassy in the Houthi-held capital of Sana’a and a consulate in Aden, the capital of Abd Rabbuh Mansur Hadi’s Saudi-backed government. Through these diplomatic channels, Moscow has consulted pro-Saudi and pro-Iran factions on counterterrorism measures, and held informal negotiations on the resolution of hostilities in Yemen.

Both major political factions in Yemen also have recent memories of Russian expressions of solidarity with their cause. In July, Moscow cordially welcomed the appointment of Saudi-aligned diplomat Ahmed al-Wahishi as Yemeni ambassador to Russia. On September 25, Russia helped Hadi’s government distribute Yemeni bank notes to southern Yemen to pay the salaries of Yemeni government officials.

To appease Shia forces in Yemen, Moscow has consistently rebutted UN criticisms of Houthi aggression against Saudi Arabia, and sent humanitarian aid to areas of Yemen ravaged by Saudi air strikes. This balanced approach to the Yemen conflict has strengthened Russia’s relationships with Yemeni political factions of all ideological affiliations, and ensured that Russia can be an effective mediator in the conflict.

Second, Russia has a long history of promoting political stability in Yemen, during periods of intra-state conflict. In 1986, a civil war between rival Marxist factions broke out in the Soviet-aligned republic of South Yemen. Even though the Soviet Union was complicit in the outbreak of this civil war as it had armed rival South Yemeni factions during the early 1980s, the USSR helped stabilize Yemen through limited military involvement and pledged provisions of economic assistance.

The Soviet Union also profoundly influenced the diplomatic negotiations that led up to the 1990 reunification of Yemen. During the 1980s, the USSR facilitated the reunification process by supporting moderate Marxists in South Yemen, who advocated diplomatic engagement with North Yemen. The Soviet Union also established a strong diplomatic relationship with North Yemen’s leader Ali Abdullah Saleh. This alliance helped bridge the sectarian divide between Sunni-majority South Yemen and Shiite-majority North Yemen.

Memories of successful Soviet diplomatic interventions in Yemen greatly enhance Russia’s credibility as an arbiter in the current crisis. Alexander Kuznetsov, a leading expert on Russia-Middle East relations at MGIMO, told me in a recent interview that the Yemeni military holds Russia in high esteem, as Moscow provided extensive assistance to South Yemen’s armed forces during the Cold War.

A successful Russian diplomatic intervention in Yemen would also have many positive implications for Moscow’s geopolitical agenda in the Middle East. From a short-term tactical perspective, the cessation of open conflict in Yemen provides an opportunity for Russia to entrench itself as a major military power on the Red Sea.

Since 2009, Russian military officials have expressed interest in establishing a Russian naval base on Yemeni soil. This naval base would increase Russia’s access to Red Sea shipping lanes and give Moscow a foothold in the strategically important Bab el-Mandeb Strait that links the Red Sea to the Gulf of Aden. Moscow’s military base construction proposal will almost certainly receive an enthusiastic reception from local politicians, as anti-U.S. Houthi forces control most of Yemen’s Red Sea coastal cities.

As the United States exerts considerable influence over commercial activities passing through the Bab el-Mandeb Strait and China has constructed a Red Sea naval base in Djibouti, the establishment of a Russian military base in Yemen would increase respect for Russia as a great power in the Arabian Peninsula, akin to Washington and Beijing. International recognition of Russia’s influence in the Arabian Peninsula would strengthen perceptions of Moscow’s diplomatic influence in the Middle East, and advance Russia’s aspirations of creating a regional collective security system.

From a long-term strategic perspective, a successful Russian diplomatic intervention in Yemen would lend more credibility to future Russian arbitration proposals. Even though Russia’s reputation as an arbiter in the Middle East has steadily improved since Moscow’s landmark 2013 deal with the United States to destroy Syria’s chemical weapons stocks, Kremlin critics in the Arab world have argued that Moscow cynically uses mediation offers to advance its own geopolitical interests.

These criticisms have been strengthened by Russian conduct during the Astana talks. Some Saudi and Qatari officials have viewed the withdrawal of Syrian opposition movements from the Astana talks as proof that Russia is using the Astana peace process as a mere diplomatic front to legitimize Syrian President Bashar al-Assad.

If Russia acts as an impartial and effective mediator in Yemen, Putin will be able to counter criticisms of Moscow’s Syria policy and increase respect for Russia as a conflict arbiter in the Arab world. As Moscow has expressed interest in mediating the Libyan political crisis, the Saudi Arabia-Qatar conflict, and Saudi Arabia-Iran proxy war, a successful Russian diplomatic intervention in Yemen would advance Moscow’s goal of becoming an indispensable great power in the Middle East.

Russian policymakers also believe that expanding Moscow’s diplomatic involvement in Yemen will help Russia improve its image in the Arab world. As former Russian ambassador to Yemen Veniamin Popov noted during our recent interview, Moscow’s promotion of diplomatic dialogue between warring Yemeni factions and provisions of humanitarian aid to Yemeni civilians will foster pro-Russian sentiments in the Middle East.

The results of the 2017 Arab Youth Survey underscore how diplomatic arbitration can improve public perceptions of Russia in the Arab world. According to the survey, 21 percent of young Arabs view Russia as their country’s leading ally. This level of support for alignment with Russia represents a dramatic increase from the 9 percent figure held by Russia in 2016 and is notably ahead of the 17 percent figure held by the United States.

This survey’s data also demonstrated that Washington’s support for the Saudi-led military intervention in Yemen tarnished the United States’ reputation in many Arab countries. Therefore, it is reasonable to assume that Russia’s attempts to differentiate itself from the United States’ unpopular Yemen strategy will foster favorable perceptions of Moscow amongst Arab policymakers and on the street.