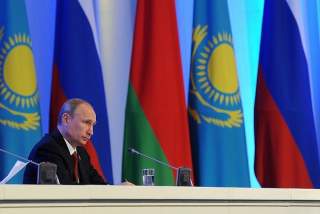 Just over a century ago, Sir Halford Mackinder, the father of geopolitics, posited that the power that controls Eurasia controls the world. Not all agree, but what began as a popular uprising in Kyiv will have far-reaching consequences for Eurasia. Russian aggression against a weak Ukraine, including the annexation of Crimea, is putting in play forces that may reshape Ukraine, Russia and all of Eurasia.

First, Ukraine is facing a near-death experience but may emerge reborn.

On the brink of economic collapse, it is launching long-delayed, IMF-mandated reforms. One will cut subsidies that have made Ukraine’s economy among the world’s most energy-intensive. Another reform is to cease propping up an overvalued currency that penalizes exports.

President Petro Poroshenko, elected free and fair last month and to be inaugurated on June 7, has broad support and a reconciliation agenda. He has wisely called for moving up parliamentary elections from 2017 to later this year. Only together can he and a representative legislature muster the political legitimacy to undertake bold reforms, such as slashing top-heavy bureaucracy and stifling regulations. These things have made Ukraine one of the most corrupt and most impoverished countries in Europe. Likewise, security forces must be purged and rebuilt. Their uneven performance against separatist forces embarrasses Ukraine and jeopardizes its security. Finally, Ukraine should decentralize governance while not crippling it (as Russia seeks). This ought to include the election of regional governors and guarantees of Russian-language rights where desired.

Outraged by Russia’s seizure of Crimea and bullying in the east, Ukrainians may be ready for bolder reforms and closer ties with the West. If not, Ukraine will remain poor and vulnerable to predation, and internal disputes will flare. A March poll by Gallup and Baltic Surveys offers a warning. Most respondents in the west of Ukraine backed eventual membership in the European Union, but in the east, support was as low as one-fifth.

Poroshenko has pledged to soon complete Ukraine’s adherence to a European Union association agreement, enabling wider cooperation. This is a defeat for Russia, which wants Ukraine to join its protectionist Eurasian Economic Union, to be created on January 1 as a successor to the Eurasian Customs Union. Europe offers Ukraine a political shield and a far wealthier export market than these Eurasian arrangements. Many of Ukraine’s exports, such as iron, steel and mining products, compete against Russia’s.

As it moves westward, Ukraine will need to cultivate a productive modus vivendi with Russia. Ukraine depends on Russia for natural gas, but it also trades heavily with the EU. Many Ukrainians have familial and cultural bonds in Russia or hold favorable views of Russians and Russia. Poroshenko, who owns business in Russia, voices interest in improving cooperation. This will require accommodation and discipline, such as paying off legitimate energy debts to Russia. Western support for Ukraine—symbolized by President Barack Obama’s declaration on June 4, "we will never accept Russia's occupation of Crimea or its violations of Ukraine's sovereignty"—will strengthen Kyiv’s hand in dealing with Moscow.

Second, by using force against Ukraine, Russia has gained new territory in Crimea, but is undermining other interests and opening the door to longer-term problems.

Toward the end of 2013, as Russians battled inflation and an economic slowdown, Putin’s public approval sank. The Sochi Olympics helped restore his luster. After President Viktor Yanukovych fled Ukraine in February, despite Russia’s offer of billions of dollars in loans, Putin resorted to revanchist policies. Using Russian state television to portray a false picture of unrest and discrimination against ethnic Russians in Ukraine, Putin mobilized his security forces and sympathizers to seize Crimea and stir separatism in eastern Ukraine. Restoring hegemony in much of Ukraine—some of it called “New Russia” by Catherine the Great—was the asserted casus belli. As with the 2008 invasion of Georgia, the seizure of Crimea lifted Putin’s popularity among many in Russia who want to secure Russia’s place on the world stage.

This may boomerang. Victory over Georgia in 2008 weakened Russia’s influence in the South Caucasus, but the Crimea annexation could be more costly. Russia has assumed large burdens for pension and social benefits in Crimea, where tourism is now blighted after the takeover. Further, Western sanctions on Russia are scaring investors. Last month, European Central Bank President Mario Draghi said capital flight from Russia since the onset of the Ukraine crisis may have reached $220 billion, far more than the Kremlin admits. For now, political opposition inside Russia is quiet, but a sluggish economy and heightened international isolation could lead to protests.

Russia’s relations with Europe are badly damaged, and the Kremlin professes to no longer see European countries as models. Putin claims, they, along with America, are in moral decay, and their power is ebbing. This week, President Obama and NATO announced plans to beef up military support for allies in Central and Eastern Europe and provide nonlethal military supplies for Ukraine. Europe is planning reduced dependence on Russia for natural gas, helping to spur Russia’s pivot to Asia. In the wake of Western sanctions, there is no doubt that Russia made concessions to persuade China to sign a long-delayed $400 billion, thirty-year accord to pipe natural gas from Russia’s Far East to China.

Third, Russia has put all of Eurasia on edge.

Russia’s neighbors now wonder which of them could be the next Kremlin target. All have economic links with their big neighbor. Belarus and Kazakhstan have made extra efforts to avoid Russian ire. They are members of the Kremlin-dominated Eurasian Customs Union, albeit with exceptions to protect key interests. In Astana last week, the three signed an accord to create the broader Eurasian Economic Union next year. It would allegedly give citizens of member states equal opportunities for employment and education across the whole Union and involve more economic cooperation.

The Custom Union’s high external tariffs, however, already harm economic efficiency. The Union is unpopular in Kazakhstan for raising the cost of Western and Chinese goods. To prevent the Economic Union from taking on a more political cast, President Nursultan Nazarbayev blocked the creation of a Union-wide parliament.

Next to Ukraine, Kazakhstan hosts the most ethnic Russians living abroad. Over three million arrayed mostly in northern areas near the Russian border. As in Ukraine, the Kremlin, if it chose, could unleash propaganda on state television, widely watched in Kazakhstan, concocting fictional mistreatment of ethnic Russians. Kazakhstan’s leaders are taking modest and tardy steps to reduce risks, but they face some opposition. Last week, in an unusual public protest, activists unfurled posters saying, "Protect Yourself from Russia's Imperial Virus!"

Belarus has felt the effects of Russian pressure through ugly trade disputes over potash and dairy exports and oil imports. President Alexander Lukashenko has shown some independence, calling the annexation of Crimea a “bad precedent.” But Belarus is heavily dependent on energy subsidies from Russia and thus has limited capacity to frustrate it.

Russia’s declining soft-power appeal forces it to expand subsidies to other wary neighbors. Last week, a Kyrgyzstan official said Russia would allocate $1.2 billion to help his country join the Eurasian Economic Union. Kyrgyzstan and Tajikistan depend on remittances from their citizens who work in Russia for a third of their GDP. The Kremlin will use this leverage to secure acquiescence to the Union.

Most of Russia’s neighbors want more Western help in balancing Moscow’s political and military power. This week, NATO and America promised more defense support to the Baltics. Most Central Asian countries worry that the drawdown of NATO forces in Afghanistan will cause the West to lose interest in their fate and leave them more exposed.

China’s growing projection in Central Asia improves its economic prospects, but some countries worry that it is growing too fast. China may overwhelm their economies or come to wield undue political influence. Beijing has invested heavily in energy production and pipelines in Central Asia, which helps to increase and diversify world sources of energy. Last September, Chinese President Xi Jinping visited Central Asia and inked tens of billions of dollars in new deals. Trains are rolling across Eurasia on a new, Chinese-built rail link that speeds shipments to Europe. Russian investment in the region pales in comparison. For now, Beijing pays obeisance to Moscow’s political predominance in Central Asia, but this may change as China’s economic penetration rises.

China may be in a better position to take advantage of Russia’s ebbing influence in Central Asia than the West is. Beijing sees the region as critical to its strategic depth, whereas the West has fewer interests there. Recently at West Point, President Obama said, “America must always lead on the world stage,” but diminishing U.S. national-security budgets signals lessened ambitions. Forestalling Russian aggrandizement in Central Asia and elsewhere in Eurasia should remain a strong U.S. interest.