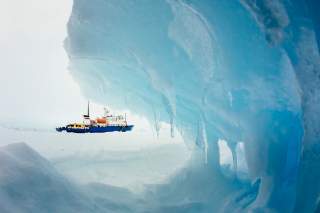 With the recent visit of the nuclear submarine HMS Trenchant to the Arctic, London seemed to send a desired message to Moscow in the wake of the dreadful Skripal affair. That this UK submarine had the company of two U.S. Navy nuclear submarines surely got the attention of Russian admirals. A Russian report predictably focused on the alleged intention of these high-tech boats to prepare for “strikes against Russia [ударов по России].” Indeed, while some reputable scholars doubt that the Cold War has returned, this latest sortie seems to be new evidence from the coldest possible place that some of the most dangerous practices of intensive nuclear and geopolitical rivalry are back.

Indeed, during the first Cold War both superpowers endeavored to turn the Arctic to their respective strategic advantage. In dispatching the very first nuclear submarine, Nautilus, to the North Pole in 1958, the Navy not only demonstrated the technological marvel of nuclear underwater navigation, but handily illustrated that Russia’s entire northern flank was immensely vulnerable to this new weapon in the American arsenal. Yet over time, Soviet strategists succeeded in confronting American planners with their own Arctic dilemmas, as the Soviet SSBN force actively pursued under-ice operations as a protective umbrella against American “strategic ASW forces.” All signs point to the return of the “good old days,” when U.S. and Russian submarines regularly stalked one another (occasionally making dangerous mistakes) as both a point of leverage and also as genuine preparation for the “big one.”

This edition of Bear Cave surveys some recent Russian writings on the Arctic strategic challenge in order to better understand how the Arctic might now figure into developing Russian strategy. One extremely interesting barometer of Russia’s newly rekindled passion for the Arctic has been a shipbuilding project that aims to conjoin warship and icebreaker designs in order to create a “combat icebreaker [боевой ледокол].” The first of these Type 23550 multipurpose ships, Ivan Papanin, has already been laid down in 2017. A sister ship, Nikolai Zubkov, is also expected to be laid down in the very near future.

The interesting design is said by one late 2017 Russian-language source to be “almost without any analogue in the world [практически не имеет аналогов в мире],” except for an armed icebreaking cutter that is operated by Norway, the Svalbard class. Naturally enough, the Russians claim that their “combat icebreaker” will exceed the Norwegian ship’s capabilities, as it is planned to be larger, better armed and more capable in the ice. As for dimensions, the Type 23550 is projected to displace 8,500 tons and measure 110 meters in length, with a beam of about twenty meters, a draft of six meters and a maximum speed of sixteen knots. The crew will comprise about fifty to sixty officers and men. Unlike most warships, this vessel will have two large cranes. It will be capable of breaking ice 1.5 meters in depth, but the Director of Admiralty Wharf, the ship’s builder, said two meters was quite possible.

For armament, the ship has a 76.2-millimeter main gun, and will also deploy a Ka-27 ASW helicopter. In addition, it will be able to deploy two small chase boats that each can deliver up to twenty marines. There is also said to be the option of operating aerial drones off the deck. Perhaps most interesting for naval observers, however, is the suggestion that the design may have two quad containers for the Klub-K antiship missiles [контейнерный комплекс ракетного оружия] built into the stern of the ship. This particular article cautions that the missile armament is yet to be fully confirmed, but that credible sources report this heavier armament is likely. The commander of Russia’s navy, Adm. Vladimir Korolev, is quoted as suggesting that Russia is not planning any kind of aggression in the Arctic, but rather he put emphasis “on the ability of the Russian fleet to exclude any possible threats that may arise in this strategic direction that is important for our country [о способности российского флота исключить любые возможные угрозы, которые могут возникнуть на этом важном для нашей страны стратегическом направлении].”

However, before one gets too anxious about this new Russian naval capability, consider that they are currently planning to build just two “combat icebreakers” to guard an Arctic coastline that stretches more than 24,000 kilometers. Moreover, the very latest report is that, like many other Russian navy ships in build, this project is delayed. Indeed, the Russian Navy only appears to be building small surface combatants at present, as well as submarines, while bigger surface-combatant projects are frozen.

True, Russia has set up a new Arctic command, along with a several new bases in the far north, over the last several years. Yet for all the talk of “Russia’s Arctic militarization,” it is not often mentioned that all these new bases have been set up well within Russia’s own territory. They are small, for the most part, and appear to be part of a larger search-and-rescue network that is being put in place. For example, a new base revealed in 2017 may look nice in photos, but is only designed to house 150 soldiers – hardly the size of a hypothetical force needed to reconquer Alaska.

In fact, Russia’s strategy in the Arctic may resemble Chinese strategy to a certain degree. Like Beijing, which may deploy its new military power to protect its Belt and Road plans, Moscow likewise seems to want to shore up its military position in the Arctic in support of its broader economic objective of further developing the Northern Sea Route (NSR). Whether the NSR plan is under some kind of actual military threat could be beside the point, as long as Kremlin planners, including those in military uniform, can be said to be all behind a national push for the NSR. Still, pursuing geoeconomic goals would not be the worst option for the Russian military—and is a practice, in fact, that the U.S. military might want to study rather than wasting untold billions in economically irrelevant locations like Afghanistan and Niger.

Speaking of China and the Belt and Road Initiative (BRI), it is by now conventional wisdom that Arctic cooperation forms a significant vector of Russia-China cooperation. Indeed, China has been a major player in providing the necessary capital for the Yamal LNG project that went on line in fall 2017. This project is said to be the jewel of Arctic energy plans. The title of a February 2018 article discussing financing for a similar project Arctic-LNG2 is simply “The Chinese Benefit from Anti-Russian Sanctions [От антироссийских санкций выигрывают китайцы].” The article laments the fact that “Beijing can dictate its terms of credit to Moscow.” Another February 2018 Russian-language survey of Arctic activities notes that China has already become “a significantly serious economic player in the Arctic [довольно серьезным экономическим игроком в Арктике].” This same analysis notes that Russia confronts a long-time management issue with its Arctic ambitions: “Unfortunately, until now we have not implemented what we have always insisted on: a unified state structure for the management of the Arctic zone of the Russian Federation.”

Some in the Washington foreign-policy establishment would like to cast the well-known “icebreaker gap” as yet another ominous dimension of the “emergent Russian threat.” Yet that argument is no more persuasive than the other weak parts of this chimera. Not only is Russia confronting an immense developmental challenge with limited resources, but its efforts, as the articles above imply, are not especially well organized. Moscow is merely attempting to enhance the weak infrastructure in its vast territories in the north—something it should have done long ago. There is absolutely no conceivable threat to U.S. national security from Russian development of the Northern Sea Route, despite a recent high-level statement to the contrary. Canadian friends and others in the Arctic region can safely go back to focusing on ice hockey and trying to clutch the gold medal back from the Russian team at the Beijing 2022 Winter Olympics.

Image: The MV Akademik Shokalskiy is pictured stranded in ice in Antarctica, December 29, 2013. An Antarctic blizzard has halted an Australian icebreaker's bid to reach a Russian ship trapped for a week with 74 people onboard, rescuers said on Monday. The Aurora Australis had to return to open waters about 18 nautical miles from the stranded Akademik Shokalskiy because of poor visibility, the Australian Maritime Safety Authority (AMSA), which is co-ordinating the rescue, told Reuters. Picture taken December 29, 2013. REUTERS/Andrew Peacock