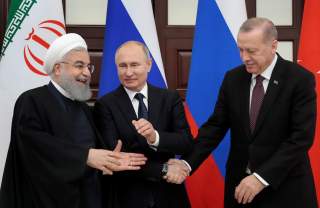 Will Iran crack under American pressure? Don’t count on it. Iran has grown accustomed to living under America’s recent economic sanctions and continues to pursue its own policies at home and abroad despite the restrictions associated with the latest U.S.-Iranian crisis. Tehran can rely on substantial domestic support and has a large army—including auxiliary paramilitary Basij forces—with access to air fleet, heavy forces and undersea arms. It also has revolutionary guards trained in unconventional warfare. Despite the impact of U.S. sanctions on the Iranian economy and the discontent among the citizenry, there has been no legitimate challenge to the country’s theocracy. In fact, the tension between the United States and Iran may drag on, which would require both regional and international players to permanently remain on alert. For example, due to Iran's proximity to its borders, Russia has a vested interest in the state of affairs in Western Asia; it has tried its best to contain the impact that the U.S.-Iranian crisis could have on its own national security. As a result, the foreign policy Russia has applied toward the crisis can be divided into three main areas of focus.

The first area of focus is directly related to the size of Russia’s Muslim population and its ability to influence political processes in the country. These days there are about twenty million Muslims in Russia, a figure that has doubled within the span of three decades. Russia needs to prevent this population from being lumped into radical nationalist groups while at the same time representing their interests. Thus, Russia is concerned that the West—or even Iran—might have the power to provoke political and social unrest amid different groups of that Muslim population. In the past, Western countries have been suspected of supporting these and other radical groups on Russian territory. Moscow is also concerned about the possibility that a Shia and the Sunni confrontation could erupt on its soil and that one of those groups would receive support from Iran. It does not want to become a battlefield in the struggle between different religions. At the same time, Russia doesn’t want to ruin its relationship with the United States.

The second area of focus is concentrated on the areas that Russia sees as a part of its sphere of influence, such as post-Soviet countries like Azerbaijan, Turkmenistan, Armenia, and other countries of the region where Moscow is very popular especially among some political and economic elites. These elites believe that Russia can help them combat the influence of radical political Islam. At the same time, these countries have traditionally strong ties to Iran. Due to this intersection of historical, diplomatic, and economic ties, the region is an area of mutual interest to both the Russians and Iranians. Cooperation between the two countries mostly centers around the Caucasus, Caspian and Central Asian regions. Russia has a long-term project, known as the greater Eurasia partnership, and Iran is a project participant. Russia tries to sell project participants on the idea that the project is a good alternative to further expansion of the West, which may cost them their national identities.

The third area of focus is connected with overlapping humanitarian and economic concerns that impact both Russia and Iran. These concerns have been footholds in the history of mutual relationships since the time of Russian and Persian empires. Nowadays both of the countries are trying to compensate for their failures by pursuing policies that promote their own and unique civilizations. In this situation the humanitarian sphere is one of the strategic ones allowing to pursue long-term aims. Of note, Russian-Iranian educational and cultural projects have doubled since the Trump administration announced its strategy for Iran. While the United States has been focused on “bringing Iran to its knees,” Russia has been focused on the future. Economic ties between these two countries have been strengthening over the past few years, with bilateral trade reaching $2 billion in 2018.

Hopefully, Russia and Iran will maintain a positive relationship despite their differences and past difficulties. For example, in 2016 Russian forces were pushed off of a military base in Iran that it had used to conduct military operations in Syria. The strategic shift happened after the Iranians squabbled over whether foreign forces should be allowed to use an Iranian military base. Also, the two countries have had some disputes over the fate of Syria. Despite these issues, Russia maintains a positive relationship with Iran, which it further confirmed during a June 25 meeting between national security advisers John Bolton, Meir Ben-Shabbat and Nikolai Patrushev. During the meeting, Patrushev, the Secretary of the Russian Security Council, declared that Russia would continue to accommodate Iran’s interests in the Middle East because it remains “the ally and partner” of choice in Syria. Both countries are focused on preventing further destabilization in the region, he said.

In conclusion, Russia wants to retain its position as a geopolitical player and influence the Muslim world, but it doesn’t want to get involved in the conflicts associated with that world. Thus, although Moscow’s leaders have valid concerns about the Middle East, they continue to see the benefits of maintaining strategic partnerships with various countries in the region. It is through these partnerships that they hope to gauge how much the Trump administration is willing to pay in order to achieve its goals.

Nadya Glebova is a fellow at the Institute of Oriental Studies of the Russian Academy of Sciences, a MENA researcher.