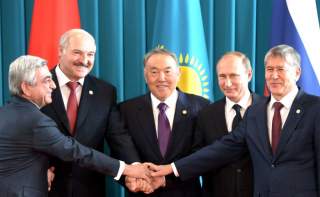 The political earthquake of the Brexit referendum has already changed international relations in many ways. While the majority of experts in the United States dwelled on the parallels between the anger of British and American voters and the possible negative consequences for the global economy, only a few considered the referendum’s implications for American foreign policy, naming, as an example, a possible end to the American “pivot” towards Asia. At the same time, several events showed that Russia, proclaimed by the same experts as one of the biggest winners of the Brexit vote, does not have to rush to any pivots: the Eurasian vector of Russia’s foreign policy is already present, and becoming more significant with every year.

Yet, one thing should be made clear from the very beginning: this Eurasian policy has little to do with the very amorphous ideology of Eurasianism, whose influence is constantly overestimated by Western experts. Having had a not-so-positive experience with foreign policy influenced by ideology (initially by communism during the Cold War and, later, by liberalism during the last decade of the twentieth century), Russia’s foreign policy is rather pragmatic. It treats Eurasia as the macroregion where Russia is located and, for centuries, a natural priority area for Russia’s international relations.

It so happened that, exactly after the Brexit referendum, several events provided more grounds to analyze Russia’s diplomatic efforts in this space. Some of them, like Putin’s visit to Uzbekistan for the anniversary meeting of the Shanghai Cooperation Organization’s Heads of State Council and visit to China, were planned, while others—such as Turkey’s apology for shooting down the Russian plane in November 2015—definitely were not. However, all of them gave reasons to argue that Russia’s diplomacy delivers results in establishing Moscow as a powerful player with a truly Eurasian outreach.

To see this, let’s analyze the abovementioned events as they were happening. On June 23, Vladimir Putin arrived to Tashkent for the Shanghai Cooperation Organization summit. Certain observers have been writing on Chinese dominance and Russian-Chinese differences for years within the SCO, but a thorough analysis of the latest developments provides enough argument to question these conclusions. Most notably, in Tashkent, with Russian support, India became a full member of the organization, which alone is a reason to reconsider statements about Chinese dominance in the organization. Furthermore, we should not forget that, despite the existing focus on security, with Islamic extremism being the main threat, economic cooperation is gaining weight on the SCO agenda, and Russia strongly supports this trend.

The latter might be explained mainly by the fact that neither Moscow nor Beijing considers, at the very least publicly, the Central Asian region to be an area of competition. The reasons for that are, first, that efforts by both powers to demand “exclusivity” from countries of the region would not be met by Central Asian rulers, who prefer balancing between two major powers; and, second, all promising projects here are costly for outside players, whether Russia or China. The reason for this is the limited ability of Central Asian republics to tackle various challenges, whether social, economic, political or security. Even Kazakhstan, far more successful compared to its struggling neighbors, has to deal with security threats. This all means that the five former Soviet republics are looking for the support of major powers and, while Russia has been deeply involved in the region for the last several centuries, it is not obvious that Beijing is ready, or eager, to take on this load.

In any case, with an active Russian support, the Shanghai Cooperation Organization is turning into a forum to address regional challenges—be it security or the economy. Lately, the economic cooperation has become a legitimate item on the SCO agenda, competing with discussions on security challenges. The Tashkent summit was not an exception: besides further steps to implement plans of economic cooperation, integration with the Chinese Silk Road Belt initiative was discussed. For years this idea was considered to be, if not aimed against Russia, at least weakening Russia’s influence in Eurasia. For example, Ukraine was eager to participate in this project in order to bypass Russia. It is obvious now that Moscow might actually win by embracing this idea of Beijing’s: if China is simply looking for better ways to connect with Europe, nothing will prevent Russia from participating in this project.

After Tashkent, President Putin traveled to Beijing, where, among numerous projects of economic cooperation, he discussed aligning the Silk Road Belt and the Eurasian Economic Union, the Kremlin’s favored cooperation format in the post-Soviet space. Considering Russian plans to develop cooperation between the EEU and not only the SCO, but also ASEAN, it is difficult to argue that Russian plans have an impressive, truly Eurasian scale. Of course, a case can be made that these plans are far from being implemented; however, they are an integral part of Russia’s foreign policy agenda. At the very least, we can see that Russia has this strategically designed, long-term policy and does not have to “pivot” to the region pressured by the bombardment of crises, which are incessant in today’s world politics. Considering the Russian president’s latest visits, we can see that Putin himself is very active in implementing these plans.

When Putin returned to Russia, on June 27, Russia’s policy produced results on the other side of Eurasia: Turkey’s President Erdogan sent a letter apologizing for the shootdown of the Russian plane last November. Again, foreign and domestic critics of the Kremlin’s moves during the crisis will find enough legitimate arguments to support their opinion, but it is difficult to dispute that Turkey eventually did what, first, would be normal for any responsible state and, second, what was expected, if not demanded, by Moscow since the beginning of the standoff provoked by the shootdown of a Su-24M on November 24, 2015.

It is obvious today that the Turkish F-16’s attack on the Russian plane was either a very unfortunate incident, basically a failure of Turkish military decisionmaking, or a reckless attempt by Ankara, with little chance for success, to assert itself in the region and on the world stage. Historians will know the truth, but at this point it is important that, whatever happened, Turkey had to backpedal and apologize.

What is more important, Russian policy basically left Ankara no other option. Russian consumers are very important for the Turkish economy, especially for the tourism, agriculture and food sectors. Currently Turkey has no alternative to Russian natural gas. Russia’s position in the region, reinforced by its involvement in Syria, provides enough stimulus for any regional power to look for cooperation with Moscow. The Russian reaction to Turkish saber-rattling after the incident was balanced and, as Erdogan’s apology shows, efficient. On one hand, Turkish businesses, benefiting the most from cooperation with Russia, were targeted. On the other hand, Moscow abstained from the drastic measures demanded by some “hawks” in Russia. The Kremlin even let everybody know that long-time, widely promoted bilateral projects, whether the construction of a nuclear plant in Turkey or a pipeline for Russian gas through Turkey to Europe, are beyond consideration for sanctions.

The reason for this restraint was simple: both projects are more significant than just Russian-Turkish cooperation. The Akkuyu plant is basically an example of what Russia can sell to other countries, which have money and are in need of nuclear plants. And a pipeline called “Turkish Stream” was meant to bring more Russian gas to South and Central Europe. No surprise that following Erdogan’s letter, a normalization process between two countries began: after a phone conversation between the Russian and Turkish leaders, Russia launched the procedure to lift its sanctions against Turkey. The foreign ministers of two countries met and rumors started circulating that Turkey might let Russia use the base in Incirlik for operations in Syria.

Therefore, within a week, after Putin’s swing to the east and the Turkish move to normalize relations with Russia, observers could see the strength of Russian positions in Eurasia—from Bosporus to the Moluccas, where Russian intentions to launch a free trade zone between the Eurasian Economic Union and the ASEAN might soon bear fruit. What conclusions can other world powers make assessing this line of Russian foreign policy?

First, that the Eurasian rim, despite all its problems, is a quite natural, familiar environment for Russia. Whatever pressure the West, especially the United States (located, as a matter of fact, in another hemisphere) is trying to apply against Russia, Moscow has enough space to counterbalance this pressure with ties to numerous countries along its Eurasian borders backed by centuries-long country-to-country relations.

Second, Russia’s strategy in Eurasia is based on the fact that its relations within the region are multidimensional. For almost any major player in the region, if needed Russia can offer an promising format of relations. It can be security cooperation on various issues, from nuclear control to the threat of Islamic fundamentalism, from antidrug efforts to cybersecurity, or economic partnerships—again, in many formats, be they energy resources or investments, infrastructure development or consumer markets, production or technology research.