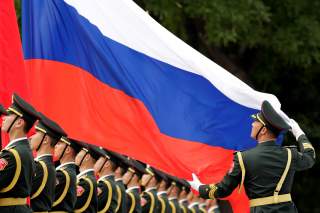 The many naysayers on the China-Russia partnership may want to take another look at this. For decades, it has been modish to suggest that this bilateral linkage is either negligible or highly problematic. So the logic goes: the two Asian giants put up a rather good show, but “the emperor has no clothes.” The trading relationship is not too stellar, transport links are limited, military cooperation seems mostly symbolic, and the cultures could not be further apart, seemingly. Then, there is that nasty history from the late 1960s that neither country wants to raise, but deep down still impacts the psychology of both powers, preventing them from developing genuine “fraternal affection.” There is a grain of truth in each of these common tropes, but it would be a major mistake to overlook the impressive growth trajectory that is apparent in the Russia-China bilateral relationship.

A catalogue of recent achievements and upcoming attractions appears in an early 2018 edition of Northeast Asia Forum [东北亚论坛] that focuses primarily on new and developing linkages between the Russian Far East (RFE) and Northeast China. Drawing to a large extent on Russian-language sources, the two Chinese authors from Jilin University in Changchun are evidently conducting research on an area of national importance, since the research was funded as a “social science key project [社会科学重大项目].” They are not romanticizing the RFE, since they duly note that the expansive region is plagued by “harsh winters, backward facilities, constrained economic development, difficult living conditions, and the problem of population outflow.” Likewise, they observe that China’s northeast has had some major challenges as well, including “the low level of marketization and a decaying industrial base.” According to this rendering, 2012 seems to have represented a kind of inflection point in both countries. For Russia, that was the year that President Vladimir Putin showcased Vladivostok to the world by hosting the APEC Forum, promoting the RFE as the most efficient gateway for trade between Europe and the Asia-Pacific. At the same time, China’s National Reform Commission was undertaking the program of “Vigorous Promotion of the Northeast [东北振兴]” within the 12th Five Year Plan, which meant taking steps to increase openness and reform in the formerly sleepy region.

Now, some of the investments in the two neighboring regions are coming on line. Taken together, these efforts to open up a number of crisscrossing trade corridors connecting Northeast China and the RFE have the potential to yield up a transformative impact for the whole region. To begin with, a couple of critically needed new bridges are nearing completion. The railroad bridge connecting the Chinese city of Tongjiang with the Russian city of Nizhneleninskoye (near Khabarovsk) links the rail networks of the two regions for the first time. The span is 2215 meters long. In addition to connecting the RFE more closely with China, there seems to be a hope that this effort will also assist in developing the old Baikal Amur Mainline (BAM) as a major compliment to the Trans-Siberian. According to this article, both Russian lines have been getting upgrades since 2013. Shipping along these lines, freight bound from Chinese cities like Changchun have been reaching Europe in as little as fourteen days. With some evident pride in the achievement of this trans-Eurasian rail-shipping route, the article mentions several “three character” shipping routes, including for example “沈满欧,” which stands for Shenyang-Manzhouli (border crossing)-Europe, and the claim is this line alone has moved ten thousand shipping containers in the last two years. Another high-profile connection that will be finished in the near term is a bridge that connects the Chinese city of Heihe and the Russian city of Blagochevensk. That 1,284 meter cable-stayed span represents the first highway connection between the two countries and is expected to provide a major boost to bilateral trade.

Several additional significant trade routes connecting the two regions are at various stages of planning, moreover. For example, the “China-Mongolia-Russia International Transport Corridor [中蒙俄国际交通走廊]” that was demonstrated by the mid-2016 truck convoy runs from the Chinese port of Tianjin to Ulan Ude, a Russian city near Lake Baikal. The president of Mongolia in September 2017 endorsed a plan to eventually build five thousand kilometers of rail with the cooperation of both Russia and China. However, perhaps the most significant of the all plans discussed are the reference to two new corridors, dubbed “Coastal 1” [滨海-1/Приморье-1] and “Coastal 2” that will form direct links from different key parts of China’s northeast into the area of the RFE’s central trading metropolis of Vladivostok. Neither Jilin Province, nor Heilongjiang Province have outlets to the sea, so that they may use these two lines to develop their links to international trade routes. For Russia, it is assessed in this Chinese analysis, that these economic developments would “have great strategic significance [有重大战略意义].” The “Coastal 1” corridor stretches from Harbin, the capital of Heilongjiang Province, and travels southeast (along the historical Far Eastern Railroad route) through Mudanjiang and Suifenhe to the Russian city of Ussuriysk before entering Vladivostok from the north. This northern vector is to be complemented by a western vector “Coastal 2” that runs from Jilin Province’s capital of Changchun through Jilin and Hunchun to the border crossing at Kraskino and arrives to the RFE port of Zarubino, just fifty miles southwest of Vladivostok across Amur Bay. Chinese analysis shows that the two corridors will encompass the modernization of systems of “highways, railways, ports, airports, border crossing points, and communications,” along with simplified procedures and lower customs duties. As a recent visitor this area (Dec 2017), my impression is that these plans are quite realistic for the intermediate time-frame. Still another trade corridor discussed in this analysis and set to increase linkages between the RFE and Northeast China still further, of course, is the Northern Sea Route (NSR) as part of the “Polar Silk Road [冰上丝绸之路].” To be sure, it’s quite an interesting moment in world history when an LNG tanker traverses the Bering Strait for the first time ever, as one did in August 2017. The NSR topic in the context of China-Russia relations deserves its own column, to be sure, but here we may relate that the Chinese analysis explains that the new route requires everything from suitable wharves to reliable communications systems and everything in between. Indeed, the NSR will form another main “pillar” of RFE-Northeast China cooperation in the coming decades.

As the LNG tanker transiting the Bering Strait demonstrates, energy has and will remain a core point that brings together Russia and China. That tanker was carrying LNG from Russia’s new giant Yamal field in the Russian Arctic. However, Russian gas will flow into China by pipeline as well. The “Power of Siberia” gas pipeline is scheduled to be completed in 2019 and this gas will then flow into China’s three northeast provinces. Also, it will supply Inner Mongolia, Hebei, Tianjin, Jiangsu, and Shanghai as well. Chinese analysis shows that Russian and Chinese engineers started working on the cross-border gas pipeline section at Heihe-Blagochevensk back in June 2015. Powering China’s northeast with natural gas is preferable from an environmental point of view to dirty coal burning obviously. Moreover, Chinese capital has played a key role in building this energy-related infrastructure in the RFE, such as the giant, new Amur Gas Processing Facility, which began construction in 2017. Also, the two Asian giants have augmented oil exports by adding a second oil pipeline in early 2018 to the original pipeline that had been completed back in 2011. Not surprisingly, Russia has been China’s top supplier of oil for the last several years.

Still, the bilateral relationship is not only about energy. Some have noted in recent years that Russia could again be emerging as a food growing superpower—a trend assisted by post–Crimea sanctions and now perhaps again by the U.S.-China trade war. Indeed, “Russia’s food exports to China are continuously increasing [俄罗斯向中国出口粮食不断增加].” Moreover, growing more food in Russia may involve innovative arrangements, such as farmers from the Chinese border city of Dongning [东宁市] renting more than two hundred thousand hectares. They are aided in that endeavor by more flexible visa arrangements. Nearby, a Chinese firm has apparently invested $300 million in dairy farms in the vicinity of Ussuriysk (north of Vladivostok) with the aim of growing to a herd of ten thousand cows. The Chinese analysis shows that the corridors “Coast-1” and “Coast-2” discussed above connecting the interior northeast China provinces to RFE ports are projected to transport annually forty-five million tons—about half of which would be comprised of cereals like wheat and soy. Cross-border trade need not be glitzy to be significant. On a similar logic, Canada is one of the largest trading partner of the United States and likewise the China-Russia trading relationship has very ample room to grow in almost all sectors.

Does the United States need to be perturbed about all the above plans? No, it does not. While a much more dynamic Russia-China security relationship cannot be completely ruled out, there seem to be relatively few signs of a total militarization of this critical relationship. Rather, the priority for both Moscow and Beijing at present appears to be on economic development. By constantly talking about the China-Russia threat, however, American strategists are likely pushing their Russian and Chinese counterparts to explore ever more military cooperation options. A wiser approach, at this point, would be to cautiously accept the warming China-Russia ties and look for a “silver lining.” For example, a China that is reasonably confident of its energy supplies from Russia may be less inclined to prepare for military conflict in the Indian Ocean due to energy fears related to the “Malacca Dilemma.” Similarly, a more confident Russia could be more rational and reasonable in its dealings with Japan, especially if Moscow is leery of being too dependent on Beijing. Finally and most importantly, if these previously grayish areas of Northeast Asia begin to genuinely “bloom” due to the activation of international trade, then this cosmopolitan, entrepreneurial spirit may impact the thinking of other regional neighbors, including especially the most proximate North Korea. Indeed, this approach is wholly compatible with South Korean president Moon Jae-in’s geoeconomic approach to developing a new paradigm for international relations in Northeast Asia.