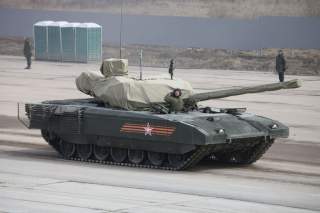 Russia’s actions in Ukraine, its military modernization program, and its more bellicose stance toward the West in general have raised concerns in NATO. The alliance needs to pay attention to territorial defense and its own military capabilities. But deploying more U.S. nuclear weapons in Europe is not a good response.

Relations between Moscow and the West have crashed to a post-Cold War low over the past two years. Russia’s military seizure of Crimea violated the cardinal rule of the European security order dating back to the 1975 Helsinki Final Act: states should not use force to change borders. Since then, the Kremlin has supported armed separatists in eastern Ukraine, where it has provided heavy weapons, leadership and Russian soldiers—despite agreements calling for withdrawal of all foreign forces.

These actions in Ukraine have taken place as the Russian military upgrades its nuclear and conventional capabilities. The modernization program’s stated goal is to equip the armed forces with 70 percent new equipment by 2020, or shortly thereafter. This apparently includes modernization of Russia’s non-strategic nuclear arsenal, which comprises ground-, sea- and air-based weapons. By conservative estimates, Russia has at least 1,000-2,000 non-strategic weapons, a significant portion of which are believed to be deployed west of the Ural Mountains, that is, in European Russia.

Furthermore, over the past eighteen months NATO has intercepted Russian Bear bombers at three to four times the rate they did in 2013. Suspected Russian submarines have probed coastal waters in the Baltic Sea. And Russia’s President Vladimir Putin has caused additional jitters with his loose talk about nuclear weapons.

The West has noticed. On July 8, the nominee to be the next Chairman of the Joint Chiefs of Staff told the Senate Armed Services Committee that he considered Russia the number one threat to U.S. national security. NATO members are increasing their defense budgets, if slowly. They have agreed to take steps to strengthen conventional forces in the Baltic and Central European regions and increase the alliance’s rapid reinforcement capability.

A Worrisome, if Unlikely, Scenario

The modernization of Russian non-strategic nuclear arms and Putin’s regular references to things nuclear worries some analysts. On the one hand, Russia’s unclassified military doctrine regarding nuclear weapons seems benign. It says that Moscow could resort to nuclear weapons in two cases: if nuclear or other weapons of mass destruction were used against Russia or a Russian ally, or if conventional forces were used against Russia and the existence of the state was at stake. That differs little from NATO nuclear doctrine in the 1960s, 1970s and 1980s, which envisaged the possible use of nuclear weapons in the event of a conflict with the Warsaw Pact, in which the conventional defense of the alliance failed.

On the other hand, we do not know what the classified Russian doctrine says. Recent exercises appear to have incorporated use of nuclear arms. Moreover, there is considerable talk in Russia about “de-escalating” a conflict by using small, non-strategic nuclear weapons. De-escalation and how it figures in Russian military planning are not well understood in the West.

Here’s the scenario that now makes Western analysts nervous: the Russian military, perhaps after a period of hybrid warfare, uses conventional forces to seize part of Estonia or Latvia, citing the need to “protect” ethnic Russians.

NATO would likely be unable to immediately defeat the attack with forces in place, but would have to marshal its conventional military power for a drive to liberate the occupied territory. (While Russia has conventional force advantages in the Baltic region, NATO continues to hold overall advantages, particularly in long-range strike capabilities.)

Then comes the rub: what if Moscow threatened to escalate to non-strategic nuclear weapons to deter a NATO conventional counterattack, or to stall or reverse a NATO counter offensive that had begun to evict Russian forces?

To be clear, this is not a likely scenario, nor is any Russian conventional military operation against a Baltic state. But is the probability zero? Three years ago, few would have foreseen what the Russian military has done in Crimea and the Donbas.

As unlikely as the above scenario may be, some analysts have called for NATO to bolster its nuclear presence, including with new American nuclear weapons. And in considering how to respond to the Russian violation of the 1987 treaty on intermediate-range nuclear forces, one of the options being considered by the Department of Defense reportedly would entail deployment of new land-based, nuclear missiles in Europe.

Any new nuclear weapons systems in Europe would add to the current U.S. stockpile of some 200 B61 nuclear bombs for use by dual-capable aircraft such as the F-16.

Before deciding to deploy any new U.S. nuclear systems, Washington and NATO should ask whether doing so would reduce the odds of the above scenario happening, or would it leave the alliance better prepared to respond in the unlikely event that the scenario played out. With those questions in mind, the deployment of new nuclear arms does not appear to be a wise choice. Five observations are in order.

First, few members of NATO would welcome new American nuclear arms on the continent. Indeed, just five years ago, a sizeable number of allies favored withdrawal of the B61 bombs. The Kremlin’s policies have put that debate to rest for the time being, and modernization of the B61 is moving forward. But it would be a mistake to assume that finding a European home for another U.S. nuclear weapons system would be easy.

Second, the fact that Russia deploys a large number of non-strategic weapons of various types does not mean that the United States must match that number or variety. NATO doctrine envisages employment of non-strategic nuclear weapons less for their military effects than for the political message that their use would send: the conflict has reached a point where it is on the verge of spinning out of control and escalating to use of strategic nuclear forces, so it is time for an adversary to back off. The combination of dual-capable aircraft and B61 bombs is sufficient to carry out this mission.

Third, an American president is extremely unlikely to resort to nuclear weapons if nuclear arms have not been used first against the United States, an American ally or U.S. military forces. Over the 70 years since the atomic attacks on Hiroshima and Nagasaki, the U.S. government has on several occasions considered using nuclear arms in conflicts, but has always decided not to. Given NATO’s conventional force advantages, the president would be even less likely to authorize the first use of nuclear weapons. The availability of a land-based, nuclear missile or some other new system would not affect this decision.

Fourth, in the scenario described above, additional U.S. nuclear weapons in Europe would hardly affect the Kremlin’s calculus regarding the threat or actual use of non-strategic nuclear weapons in response to a NATO conventional counterattack in the Baltics. That would be a colossal and risky gamble for the Russians. If NATO went ahead with its conventional counterattack, Moscow would face the choice of having its bluff called or actually launching a nuclear strike against targets on alliance territory.

If Moscow unwisely decided to cross the nuclear threshold, Russia’s first use of nuclear arms would dramatically raise the probability of an American nuclear response—to near certitude. The Kremlin presumably would understand the likelihood of this response to a Russian first use of nuclear weapons. The presence of nuclear missiles in Europe in addition to B61 bombs would not change Moscow’s calculation in a meaningful way.

Fifth, the best way for NATO to respond to Russia’s military build-up is to bolster its conventional force capabilities. This will become more important as Russia seeks to erode NATO advantages through its modernization program. The alliance should maintain its lead in numbers of key conventional weapons systems and, in particular, its qualitative edges, so that it has forces that allow it to deter and, if necessary, defeat aggression at the conventional level. NATO should leave the decision to use nuclear weapons first—a hugely difficult, highly risky and dubious bet—to Moscow.