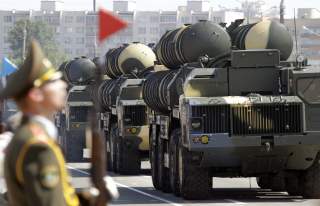 Russia announced on Monday, September 24, that it was deploying the S-300 air defense system to Syria in the wake of an Israeli airstrike that Moscow says led to the downing of one its IL-20s and its fifteen-member crew. Iran’s Press TV bragged that giving Syria the S-300 was a “nightmare” for Israel. Meanwhile, Israeli Prime Minister Benjamin Netanyahu hinted on Tuesday that Jerusalem would continue to act in Syria. This crisis came amid the United Nations General Assembly meeting as U.S. National Security Advisor John Bolton called the deployment a “major mistake.”

The crisis began on September 17 when a Syrian S-200 anti-aircraft missile struck a Russian IL-20 surveillance plan after Israeli F-16s targeted Iranian installations in Syria. Russia's Ministry of Defense accused Israel of intentionally created a "dangerous situation." Moscow also claimed that Israel only gave the Russians a one-minute warning over a “hotline” the two countries established in 2015. But Israel responded that by the time the Syrian air defense had launched their missiles that hit the Russian aircraft, the Israel warplanes were back in Israeli airspace. Discussions appeared to go well with Moscow after September 18, as both Netanyahu and Russian president Vladimir Putin sought to save face. But then, Russian Defense Minister Sergei Shoigu announced that S-300 batteries would be deployed. It “is capable of intercepting aerial attacks at the distance of over 250 kilometers and simultaneously countering several targets,” he said. The “hot heads” would be cooled down, he said, a jab at Israel.

The S-300 delivery comes after Russia and Turkey agreed to a deal in Idlib that would stave off a Syrian regime offensive that the United Nations had warned could be a humanitarian catastrophe. In short, Russia’s S-300 deployment is part of Moscow’s effort to solidify the frontlines of the Syrian conflict. The era of uncertainty in which Israel was able to act with almost impunity in Syria is drawing to a close. This is one message behind the S-300. For Moscow, it is a prestige issue as well. Its media has emphasized that the S-300 is also seen as a threat to the U.S. Coalition. Russian media also emphasized that the deployment might lead Israel to seek more advanced weapons from the U.S. For instance, Sputnik news—widely viewed as representing Moscow’s line—showed an F-35 as an example of these more advanced weapons, even though Israel already has a dozen of the advanced aircraft. (Three new F-35s arrived in June.)

For the United States, the S-300 is a symbolic escalation more than a real threat. While the U.S. Secretary of State has sounded a conciliatory tone, seeking to discuss the issue on the sidelines of the UNGA, Bolton took the tougher line.

Furthermore, Israel sees the S-300 deployment as a symbolic escalation as well as a technological escalation. The former head of the Israeli Defense Force’s Strategic Division, Brigadier General Assaf Orion at the Institution for National Security Studies, said the system raises a risk to all air forces operating near Syria. “However one may keep in mind that for the last twenty years Israel was preparing for this to appear in theater.” Israel had also trained against the system in Greece. He noted that if the S-300 was in "incompetent and reckless" hands, it would be a concern. This alludes to the fact that the Syrian S-200 fired during the September 17 air raid was not intended to down the IL-20 but struck the wrong target. Moreover, Orion pointed out that Russia had already deployed the S-400 in Syria. That system was first reported in Syria in 2015, and IHS Janes Defense Weekly confirmed a second battery in September 2017. Yet over the year that Russia had two S-400 batteries in Syria, Israel says it struck 200 targets in the country. This is in addition to the 100 targets Israel hit between 2012 and 2017.

A carefully managed relationship for years, including numerous meetings between Netanyahu and Putin, led to an apparent understanding under which Israel operated against Iranian targets and weapons transfers to Hezbollah. This was often not acknowledged by Jerusalem except in rare incidents or years after the fact. For instance, when an Iranian drone penetrated Israeli airspace and one Israeli F-16 crashed in the Galilee after being targeted by S-200s.

Both Israel and the United States have already dealt with the S-300 threat in Syria. In 2017, Russia said its S-300s had tracked U.S. planes in eastern Syria. Additionally, in April this year, Israel Defense Minister Avigdor Liberman said that Israel would destroy any S-300 that targeted Israeli aircraft.

This means the Russian S-300 supply is primarily aimed at shoring up the Syrian regime’s confidence in its Moscow ally. After Moscow restrained Syria from attacking Idlib, and also sidelined Iran in its deal with Turkey, Russia is sending a message to Israel and America that it takes seriously the Syrian regime’s desire to control its own skies once again after seven years of civil war. The Syrian regime has watched its foreign policy be outsourced to Moscow in Idlib and Washington has increasingly indicated America will be staying in eastern Syria. The S-300 then becomes a consolation prize for Damascus. The heyday of Israel’s ability to operate freely is closing. This is not because the S-300 is a major threat, but because any further incidents in sensitive areas like Idlib, where Iran has built infrastructure, will be taken seriously. It is part of the broader process of ending the conflict part of the Syrian civil war and Moscow's attempts to affirm Damascus an arbiter of Syrian sovereignty.

The question for Washington and Jerusalem, both of which oppose Iran's role in Syria, is whether to challenge the regime further. For Moscow, it has gambled with the S-300. If Israel continues air strikes and the air defense system fails to be used effectively, Russia will be embarrassed, and Damascus will call on it to do more, forcing Moscow to decide on whether it is serious about escalation.