Russia's Victory Day Celebration: Much More Than Just a Parade 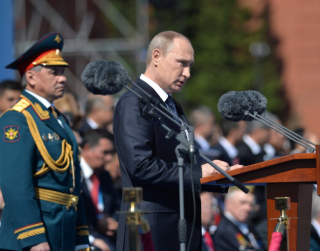 This has been the biggest military parade in Russia’s modern history: 16,000 servicemen, 200 army vehicles, 150 aircraft. Warships paraded elsewhere—from Vladivostok on the Pacific to Sebastopol on the Black Sea to Severomorsk in the Arctic to Baltiysk in the Baltic. The Moscow parade culminated months of elaborate preparations to mark the seventieth anniversary of Soviet victory in the Great Patriotic War against Nazi Germany. The event has sent a number of important messages, which outsiders would do well to reflect upon.

More Than a National Day

May 9 is, for the Russian people, much more than Victory Day in a war that lasted almost four years and claimed 28 million of their men and women. Since Soviet times, it has been the country’s true national day, overshadowing the official ones: the October Revolution Day and Russia Day in June. It was the shared grueling experience defending their country that shaped and formed Russia’s modern nation, and has helped keep it together, even after the fall of the Soviet Union. The memory of the war has become sacred, and, for most people, according to a recent poll, May 9 is as important as their own birthday.

A military parade is above all about the military. After the fall of the Soviet Union, Russia’s conventional military might declined dramatically. It was not until seven years ago that Moscow started rebuilding it in earnest. Since then, despite a fair amount of corruption and mismanagement, Russia’s military reform has been a resounding success. The difference between the Russian military’s haphazard performance in the 2008 Georgia war and its clockwork precision in the 2014 Crimea operation is stunning. The vast sums of money poured into military modernization have been turned into new weaponry. The 2015 parade featured a new-generation battle tank and new infantry combat vehicles, as well as the S-400 air defense system and the RS-24 Yars mobile intercontinental ballistic missile. As a conventional military power, Russia needs to catch up, but it is already making strides.

Russia’s Alienation from the West Confirmed

Most of the talk in the run-up to the parade had been about the attendance by foreign leaders. The lineup in Red Square provides a useful illustration of Moscow’s current international standing. Western leaders who were present en masse five years ago were now conspicuous in their absence. In his speech, President Putin thanked Britain, France and the United States, but he went on to condemn attempts to impose global unipolarity and the use of military force that undermined the post-WWII international order. The refusal of Western leaders to attend Moscow celebrations was seen by a lot of ordinary Russians as a confirmation of the new era of adversity between Russia and the West. As to “lost opportunities,” they were probably lost in the five years since the previous big parade in Red Square.

Sino-Russo Entente Is More Than an “Axis of Convenience”

The star foreign guest in 2015 was President Xi Jinping of China. He was repeatedly shown on Russian TV chatting amiably with President Putin; the two men apparently enjoy each other’s company. They watched as a PLA unit marched for the first time in Red Square and the S-400 system drove by, soon to be sold to China. The day before, Putin and Xi had watched dozens of economic cooperation accords signed between China and Russia. At a press conference, Putin talked about “a common economic space of Eurasia” to be built by harmonizing China’s “one belt, one road” strategy with the Eurasian Economic Union. This is a clear departure from Putin’s own “Greater Europe” idea from five years ago. A number of other leaders from this emerging Greater Eurasia—from Kazakhstan, Armenia, Kyrgyzstan and Tajikistan—were also on hand in Red Square. This rapprochement is about much more than geoeconomics: in his May 9 remarks, Putin highlighted China’s role and sacrifices in WWII in the fight against Japanese militarism—a preview of a Russian leader’s first-ever appearance at the Beijing WWII parade in September.

Russia’s Place in the “Non-West”

Other world leaders in Moscow came mostly from Asia (India, Vietnam, and Mongolia), the Middle East and Africa (Egypt, Palestine, South Africa, Zimbabwe) and Latin America (Cuba, Venezuela). Increasingly, Russia has been identifying itself as a non-Western country following its own path. Within two months, President Putin will be hosting two summits back-to-back: of the BRICS countries and of the Shanghai Cooperation Organization. In both, China is prominently present. Ever-closer Sino-Russian cooperation in both fora and at the UN Security Council level would lead to a further consolidation of the “non-West” as the global order keeps changing. The one Western leader to come to Moscow after the parade is the German chancellor, Angela Merkel. On May 10, she will honor the victims of WWII and hold talks with Putin on Ukraine. The political distance between Moscow and Berlin has multiplied. The Russo-German special relationship—a mainstay of post–Cold War cooperation in Europe—is history, like WWII.