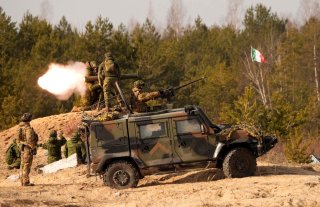 Russia’s aggression against Ukraine has rightfully aroused feelings of sympathy from across the world. But with the intensive news coverage came the unexpected phenomenon of war correspondents and interviewees endeavoring to impress upon their audience the importance of Ukrainian suffering by mentioning that it is not taking place in the Middle East. References to how “unthinkable” war in Europe was or how the refugees are “like us” and have “blonde hair” became increasingly difficult to ignore for many viewers who were trying to center their attention on the Ukrainian people.

The most alarming display came from CBS News’ Charlie D’Agata, who said, “this isn’t a place, with all due respect, like Iraq or Afghanistan that has seen conflict raging for decades. This is a relatively civilized, relatively European—I have to choose those words carefully, too—city where you wouldn’t expect that, or hope that it’s going to happen.” D’Agata apologized and some seem to view these statements as individual failures. But language exists in a cultural context, and the underlying assumptions—the unspoken “common sense”—that these statements express are worth examining. I would argue this represents a deeper issue of bigotry that has a meaningful effect on the American people’s view of war and the American state’s national security decision-making.

Discussions of racism and foreign policy are difficult and somewhat rare. For several years, America had a president who pursued office on a platform of banning Muslims from entering the United States, a secretary of state who was the darling of seemingly every anti-Muslim hate group listed by the Southern Poverty Law Center, and a national security advisor who was the chairman of one such group. Yet the notion that specific policies may be influenced by bigotry was seldom contemplated.

Americans can also have a somewhat warped understanding of racism that bedevils their domestic policy discourse as well. For many, racism is specifically linked to explicitly stated theories of genetic racial inferiority and defect. Many think of the kind of pseudo-science that underpinned the holocaust and led Americans in the antebellum South to measure human skulls. But most forms of bigotry in history present as a cruder tribalism. Specifically, it often involves coding populations and places with certain attributes. While this may not strictly determine how every member of that population is treated on an individual level, it becomes a heuristic foundation for interaction with them.

There is clearly a propensity to code brown Muslim people as uncivilized at best and terrorists and criminals at worst. Middle Eastern refugees are rejected and demonized because war and destruction are conflated with their identity and culture. The same European governments that confronted 2,000 freezing Afghan and Syrian refugees with a multi-national military mobilization months ago are now greeting Ukrainian refugees warmly.

But the Middle East itself is spatially coded in a way that is far more dangerous. The differentiation the reporters articulated reflects a common pseudo-history of the Middle East as having always been a Hobbesian realm of never-ending bloodshed. While this has been articulated by many over the last twenty years, this comment by Fox pundit and former Trump administration official K.T. McFarlane is broadly representative: “[In] the Middle East, they’ve been fighting for 4,000 years. It’s been an ethno-sectarian battle and psychodrama, and they’ve been killing each other for millennia. Their normal state of condition is war.”

This, as many pointed out at the time, is entirely ahistorical. This kind of “secondary racism,” a bigotry framed as rational due to race-correlated factors, is appealing to the ethnocentric orientation of Trumpism. But Democrats have engaged in this as well. During his last State of the Union Address, President Barack Obama claimed that the problems of the contemporary Middle East are “rooted in conflicts that date back millennia”. There is no part of the world without some form of historic ethnic or sectarian divide; Obama’s unfortunate words were more about self-absolution than history.

The lesson this revisionist history provides is that the Middle East is not a region with a population, but a battlefield defined by a series of intertwining and unsolvable problems. Trying to even reduce the harm caused by any U.S. policy would be arduous and make little difference because of the other existing problems. Although the Obama administration never tried to end the most problematic American policies in the region, they were given credit for seeming like they knew they should. They knew continuing to placate Riyadh was wrong but began U.S. support for the horrific war in Yemen anyway. They knew continuing to give Israel carte blanche support was irresponsible but still backed down from any fight on the matter. They knew the “War on Terror” policies were overmilitarized and counterproductive but only sought to change its contours a bit.

By allowing themselves the pleasure of this narrative, they can both avoid the public display of cognitive dissonance required to defend these policies as perfectly righteous and spare themselves the cost and uncertainty of having to materially change U.S. policy in the region. The Middle East is a mess, it always has been and always will be. All there is to do is manage the situation and extract America’s interests—pursuing change is pointless. It is a kind of faux-realism that distances leaders from their own policies.

This coding of the Middle East as an irredeemable warzone absolves national security elites of responsibility not to do harm. As Spencer Ackerman recently noted, “over my two decades of reporting on ‘national security,’ I've encountered an attitude within the Security State and its allies where if the United States isn't the sole cause of a disaster, then the United States is functionally morally blameless.”

This mentality substantially reduces the threshold for intervening militarily, supporting the recklessness of allies, and imposing sanctions that damage the social fabric of countries. Causing turmoil in the region becomes viewed as the moral equivalent of littering at Chernobyl. Concern about human carnage is instantly diffused by the mere invocation of the term “collateral damage.” Shoveling large quantities of sophisticated arms into the hands of the region’s most irresponsible actors is defended as a jobs program for Americans in Washington’s most elite publications. Displays of “operator culture” and hyper-competent violence against faceless brown hoards fill American popular culture as enviable coming-of-age journeys of manhood and self-discovery.

To be fair, America is certainly not the only country with such a problem. Many of America’s European allies do as well and third-world countries are not above harboring various chauvinist attitudes towards one another. But America is the superpower. The global footprint of American military and security entanglements makes a meaningful conversation about this issue vital. Any discussion about U.S. policy on Yemen, Palestine, or even certain aspects of the War on Terror that ignores this matter is simply incomplete.