Saakashvili and the Stanislavski School of Governance 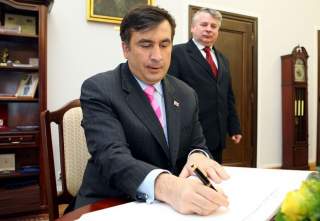 Former Georgian president Mikheil Saakashvili has made a career of being at the right place, at the right time: making the audition, taking the part, acting the role, and even having a word with the director if need be. Now he’s done it again. The Kiev government has appointed him Governor of Odessa, a move that, as a sovereign government, it’s perfectly entitled to make but also one that is likely to antagonize the predominantly Russian speakers in eastern Ukraine.

As remarkable as the appointment may seem, a glance at his record suggests that it is consistent with his adaptability. Saakashvili studied law and human rights in Europe and the United States, learning the rituals of normative approximation. He mastered Russian when that was the ladder to power; he mastered English when times changed. He speaks five languages, not least Ukrainian. During nine years in power, he acquired quite a few friends in very high places. The bottom line: when lights focus on Ukraine, he will be ready and will put on a good show.

His repertoire is quite expansive. He is among the youngest presidents in the world; the aggressive reformer; the defender of Western civilization; the pro-Western ex-president of the small former Soviet country in self-imposed exile; the Tufts academic; Ukrainian president Petro Poroshenko’s chief lobbyist; and now the Governor of Ukraine’s sixth most populated region, Odessa, 200 kilometers from the annexed Crimea and the Russian-supported breakaway region of Transnistria, in Moldova.

For the first generation of Georgian statesmen, Saakashvili was the face of the future. We had set out not only to create “a state” that would be little better than a personal fiefdom of power, but a new kind of state, with options and real opportunities. As Georgia had been one of the most economically and socially devastated successor states of the former USSR, we needed a lot of attention to achieve that. We needed the world to see us in terms not of what we were-- but of what we could become.

Like Ukraine today, Georgia was torn apart, through smaller or greater civil wars. And people were craving for a steady hand that would stop all petty power games. A leader of our own, but not quite: Saakashvili was in the right place at the right time. The name of the game was not being a democrat wanting to embody the will of the people nor merely a westernized reformer. It was about being both at the same time: on the one hand, being the no nonsense heavy handed Soviet leader ready to stand above all chieftains with a heavy hand; on the other the westerner who would speak rule of law with Georgians. It was being different things, at different times, for different people.

It was about being Soviet and post-Soviet at the same time. Saakashvili controlled the security forces; raided media outlets; controlled anyone making over couple of thousand of dollars; “convinced” anyone with a little bit more wealth in the country to “make a donation”, often in the context of a plea bargain agreement, with an explicit “or else”; he used torture in prisons and there were, as some say, even targeted killings of foes. That was the local chieftain Saakashvili, who did what must be done.

There was also the central stage: Saakashvili heroically fought corruption, dismissing the whole police force and building a new corps from scratch. The man who created an easy fire, easy hire environment (for foreign investors). And he tirelessly – some would argue even recklessly – fought Russia; not to win against Russia, but to be seen fighting. In many respects, President Saakashvili often fought a good duel against President Putin. The President of a small “post-Soviet” or “Near Abroad” state dared to call Putin a liar, “Liliputin”; and Putin obliged him by threatening to “hung him by the balls.” Each supported the other’s act.

For those following Georgia closely, it looked like a surrealistic place where Jonathan Swift's and George Orwell's fantasies intersected and when these two are taken together the tears trump that laughter. Nonetheless, too many people had endorsed the President to change their tune.

Not appearing to fail is the main secret of what might be called the Stanislavski School of Governance. Saakashvili did not lose the war with Russia in 2008; he defended the West! He did not lose the elections of 2012; he graciously conceded defeat! He did not run away from the rage of the people he had tortured; he was in “self-imposed” exile! He believed in rule of law, that is, for the rest of us. If it is a matter of perception, Saakashvili will perform; if he fails, make no mistake, it is Odessa that will have failed. A leader who is not prepared to assume the responsibility of his failures is dangerous, because he is ultimately reckless.

Times have changed. Ukraine in 2015 is not the Georgia of the early 2000s.W hat happens on the ground matters more and is contested more. Russia’s economic crisis, a Russian speaking population, an ongoing civil war, a provocative Saakashvili few kilometers from Tiraspol and Crimea, could catalyze conflict. This is no place for bravado politics. It pains me even to make these observations as I’m not trying to score points against Saakashvili. My true concern is over Ukraine’s future as it also has implications for Georgia’s independence as well as Moldova’s.

Unfortunately, westerners and even strategic partners, like Ukraine, continue to believe in Saakashvili. Washington warns us against prosecuting those charged with criminal offenses while in office under Saakashvili. European Christian Democrats continue to lionize him as a precursor of post-Soviet democracy. And now the worst insult of all, leading Kiev politicians appointed a person who is afraid to come home to face criminal charges--as the governor of an important region, with a large concentration of Russian speakers.

Georgia will survive Saakashvili’s latest maneuver. But will Ukraine be as lucky?  Does it intend to outfit Saakashvili with a rubber stamp legislature, as he enjoyed in Georgia? Will he be authorized to conduct raids on opposition headquarters or take over opposition television and radio stations, as was his method of suppressing dissent in Georgia? Will they accept his use of imprisonment, torture, confiscation of private property and even murder to build the sort of authoritarian state he constructed in Georgia?  And above all, does Ukraine wish a region with a large Russian-speaking minority to be governed by a person who had so often expressed his hatred for President Putin and the Russian Federation?

If Saakashvili has really given up his Georgian citizenship, we in Tbilisi may even have reason to celebrate this sad mistake, but whether Ukrainians will is another matter.

Tedo Japaridze is chairman of the Foreign Relations Committee of Georgia. He was Georgia’s ambassador to the United States. He was also national security adviser to Georgian President Eduard Shevardnadze and was Mikhail Saakashvili’s first Foreign Minister. This essay is not an official statement and represents his personal opinions.