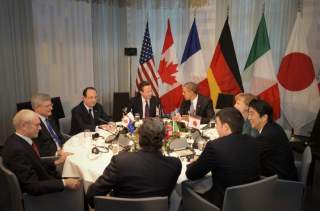 International order is all the rage these days. Not since end of Cold War has so much sustained attention focused on the web of norms, institutions, rules, and relationships that has for seven decades regulated large swathes of international behavior.

And for good reason: among global leaders there is a palpable sense that global order is fraying, but there is far less agreement on what to do about it. George H.W. Bush may have held out the prospect of a New World Order as the Soviet bloc collapsed, but today’s leaders have put forth few coherent plans. This invites danger, as the future of world order is in many ways the question of our geopolitical age.

It’s clear that global fragmentation preoccupies foreign policy minds these days. President Obama devoted a full quarter of his recently released National Security Strategy to international order and America’s efforts to strengthen it. Henry Kissinger’s new book World Order is a bestseller, and former Secretary of State Madeleine Albright this month expressed great concern the international order “because there is a lot of pressure on the system.” The Council on Foreign Relations’ Richard Haass recently wrote of the “era of disorder” and Director of National Intelligence James Clapper told the U.S. Congress that last year saw the highest rate of political instability across the world since 1992.

All the focus is understandable. The liberal international order, forged in the ashes of the Second World War, has preserved peace among the great powers, fostered economic prosperity, and facilitated the spread of freedom. The worries about its future trajectory are all too appropriate as challenges mount across the world. An open and rules-based system, global order is under pressure from Russia’s violation Ukraine and others’ sovereignty, the rise of the Islamic State and destruction of long-standing borders in the Middle East, China’s challenge to maritime rules across the South China Sea, and more.

Yet the all-too common focus on the political superstructure that has helped to govern global behavior also obscures a deeper reality: there is not one international order but several.

Over the decades, the global system has come to advance a set of principles in five key areas. There exists a trade order, based on commercial reciprocity and non-discrimination, and a financial order that aims at monetary stability in a world of floating currencies. The maritime order is premised on territorial sovereignty and freedom of navigation, while the nonproliferation order aims to prevent the spread of nuclear weapons. An emergent human rights order is rooted in respect for fundamental liberties and the democratic process.

It is along these five dimensions that the fraying has begun in earnest. In trade, the collapse of global liberalization and the emergence of regional blocs have combined with the rise of globally competitive state-owned enterprises that test the WTO’s regulatory structure. The market turmoil of recent years has raised questions about the financial order’s legitimacy, while the maritime order is under threat from China’s claims to virtually the entire South China Sea and Russia’s extensive claims in the Arctic Ocean. North Korea and Iran’s nuclear pursuits pose a profound challenge to the nonproliferation order and the human rights order, too, confronts new pressures; by one measure, the degree of freedom in the world fell in 2014 for the ninth straight year.

Should this fraying turn to fragmentation, the United States, its allies, and all other countries that depend upon an open and stable world will suffer the consequences. The principles of international order – avoiding great power war, expanding economic intercourse, and providing a political foundation for human freedom – would become less binding. Different areas of the world would become increasingly subject to local consensus or the desires of the regionally dominant power. And institutions and arrangements that have successfully regulated key areas of state behavior – ranging from the WTO and the IMF to the Nonproliferation Treaty – would become replicated, ignored, or simply less effective.

Thus the imperative to shape and strengthen global order is strong.This starts with enhancing the ability of that system’s strongest actor – the United States – to enforce rules. Here, self-inflicted wounds like sequestration that have imposed draconian and illogical cuts in defense spending hinder the effort. Washington cannot, of course, do everything alone, and it will have to work with partners to update global arrangements, bring new players into representative institutions and shape norms in new domains like cyberspace. As it does so, it should look outside its usual slate of friends and allies to emerging powers like India, Brazil and Indonesia.

As this takes place, the transatlantic partners that constructed the enduring postwar order need a searching discussion about just what changes to it they are prepared to make – or to endure. Countries like Russia and China were not among the architects 70 years ago, and they have been brought into the house only haphazardly. It remains unclear whether they wish to make major renovations to that house, or to tear it down entirely.

Notions of international order tend toward the abstract and amorphous, and often seem divorced from the concrete realities of politics, commerce and defense. But the globe’s underlying structure is all too real. As an increasing number of our leaders come to understand its importance and increasing fragility, they will see that it is on the notion of order that the world turns, or burns.

Richard Fontaine is president of the Center for a New American Security in Washington, D.C.He previously worked at the U.S. State Department, on the National Security Council Staff, and as a foreign policy advisor in the U.S. Senate.