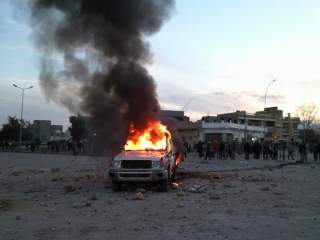 After just over a year of negotiations between rival factions the United Nations Special Mission in Libya (UNSMIL) completed what it is calling the “final text” of the peace agreement aimed at ending the country's almost year-and-a-half long rift. Libya’s political division has not only escalated to a civil war, but it has also created a vacuum in parts of the country that the Islamic State has been able to fill. UN Envoy Bernardino León announced names for a new government, and called on the eastern Tobruk-based House of Representatives (HoR) and western Tripoli-based General National Congress (GNC) parliaments to accept it and the peace agreement without amendment. These competing Libyan factions, however face major obstacles and are not likely to come together on this deal. First, it is well known that spoilers on both sides are actively undermining the peace process, and the HoR and the GNC are unlikely to divorce themselves from these powerful actors on the ground without proper motivation. Second, the talks heavily favor the HoR side, whose self-proclaimed legitimacy is quickly dwindling. Despite optimism from the UN and support from Western countries for the “final” agreement, Libya will not come out of its current conflict until its political entities can effectively ostracize and isolate belligerent figures within their own ranks—something that will be no easy feat and likely impossible unless the UN adopts a more balanced approach.

Of the parties at the negotiating table, the HoR currently has been afforded the strongest standing. Each draft of the Libya Peace Agreement has made it the basis of a future government, given it considerably more power than the GNC and renewed its mandate for another year—if not longer. Some of the political figures in the HoR may well want to accept this peace deal to reaffirm their contested legitimacy, but they do not control Libya's eastern government. The HoR is beholden to Khalifa Hifter, a prominent military commander who fought both for and against Muammar Gaddafi during the course of his career. After spending a number of years living in Northern Virginia, Hifter returned to Libya, first to partake in the 2011 revolution, and then to defend the HoR in 2014 against its rivals.

Hifter and his allies fought the Misrata militias that drove the HoR out of Tripoli last May and protected it from the Islamist militias that took over Benghazi last October—a move that was widely welcomed by Benghazans. At the time, even though Hifter’s own militia was known as the "Libyan National Army," they had no formal standing above any other militia in Libya. That changed, however, when the HoR made Hifter the official commander of its armed forces this past March. Both before and after his appointment, Hifter did not engage in his operations out of loyalty to the HoR but rather to establish himself as a strongman in Libya—emulating Egyptian president Abdel Fattah al-Sisi. Like Sisi in Egypt, Hifter’s raison d'être is to “purge” Libya of the Muslim Brotherhood, what he calls a “malignant disease.”

It may appear that Hifter’s anti-Islamist stance and his campaign against the GNC and its allies benefit the HoR despite being self-serving in nature—and in many ways they indeed have. Yet, even as the commander of the HoR’s armed forces, Hifter has hardly acted in accordance with his "allies" in Tobruk. When the HoR’s representatives engaged in negotiations with the GNC, he undermined their efforts by ramping up airstrikes in Tripoli and threatening to invade the city. Even more flagrantly, Hifter has controlled the movements of HoR prime minister Abdullah al-Thinni, most recently last month when his forces arrested the prime minister as he was trying to fly to Malta to meet with Libya's neutral National Oil Corporation. During the negotiations that led to this “final agreement,” the general re-launched his military campaign in Benghazi, raising the ire of GNC prime minister Khalifa al-Ghwell. Despite Hifter's brazenness, he retains his official status with the HoR, and the HoR's political leadership will not likely act against him. Doing so would mean severing ties with their dominant military force on the ground—a move their GNC rivals would surely welcome.

On the other side of the country, the GNC is weaker at the moment. The various drafts of the peace agreement include it in the unity government as the dominant political force in a "State Council" underneath the HoR. In some previous iterations of the agreement, this body would have the power to veto the HoR's legislation; in this most recent version it has a consultative role, though it and the HoR must reach consensus on a handful of appointed positions. Even if this recent “final text” gave the State Council slightly better standing, it’s hard to fathom that the GNC would sign it. The HoR has thus far been given preference because it is technically, though barely, electorally legitimate. If the GNC can hold out until the HoR’s term expires on October 20, the playing field will even and its negotiating position will be much stronger. The HoR has already decided that it will not step down when its mandate ends, but its case for international recognition will certainly be weakened. Given this, the UNSMIL's insistence that the GNC accept this final text “without amendment” is not serious. When the GNC proposed changes to the text this last Thursday and said it refused to produce its candidate list for the unity government until they were accepted, no one should have been surprised. The next day, however, León announced names for a unity government, including HoR representative Faiez al-Serraj as prime minister, without input from the GNC. (Note: it was widely misreported that al-Serraj is a member of the GNC—BBC, Guardian, Economist, and Daily Star. Al-Serraj is indeed a member of the HoR.) The Tripoli-based government has already announced it will reject the UN’s proposal.

But even if a new "final agreement” emerges that is more balanced and palatable to the GNC, the government in Tripoli will still have internal obstacles as the powerful Misrata militias that back it are divided. The elected Misrata Municipal Council and militias aligned with it have been in favor of negotiations even at times when the GNC itself has boycotted them and has in fact backed this unity agreement. However, other Misrata leaders like Salah al-Badi have opposed the talks and reinvigorated the “Libya Dawn” campaign against Hifter's allies. If these militia leaders continue to obstruct, it will be difficult to separate the GNC from powerful allied militia leaders for fear of empowering Hifter, regardless of internal differences that exist within the Tripoli alliance.

How then can Libya emerge from its stagnant peace process and civil war? Three steps will be necessary to change the dynamic in Libya and bring it out of its current rut. First, the UN should work more effectively to ensure that Hifter, Badi, and other select figures are sanctioned and isolated as they continue to obstruct. One might argue that these men, rather than the GNC and the HoR, ought to engage one another directly in talks as they hold real power in Libya. This is highly unlikely, however. Hifter has made it clear he intends to eliminate his enemies rather than negotiate with them; if he were open to compromise he would not have obstructed negotiation after negotiation that favored his allies in Tobruk.

What to do then? Though Russia and China have blocked previous UN sanctions that targeted Libyan individuals, requesting more time to deliberate over such measures, this avenue should be pursued more vigorously. Such a move will be needed to cut Hifter off from his backers in Egypt and the UAE and Misratan hardliners from their supporters in Turkey and Qatar. While the Kremlin may see Hifter as a strong secular figure fighting Islamist militants—ones that are likely connected to jihadists Russia is fighting in Syria—it should realize that in protecting Hifter they are prolonging the power vacuum. In such conditions, Islamist fighters are more emboldened and can operate more freely than they could if Libya's political crisis was resolved. And if Hifter is enabled to crack down on them more aggressively, the flow of weapons from Libya to Syria will continue and the flow of fighters could increase—much in the same way Libyan fighters fled Gaddafi's crackdowns in the late 1980s to join al-Qaeda and the Taliban's fight against the Soviet-backed regime in Afghanistan.

Second, the United States and the EU should offer meaningful financial and military incentives to promote the creation of a national army drawn from Libya's existing militias that serves solely under a civilian-led unity government. Though these militias are currently aligned with one faction or another, these relationships are based on convenience, not ideology. Considering Hifter's real loyalty is to himself, it would not be impossible to break off militias associated with him—especially if a new powerful force that had more promise of international recognition and support emerged. Some tribal militias have already abandoned Hifter, uniting with Misrata to fight the Islamic State. On the other side, many of the Misrata militias are not ideologically aligned with the Islamist forces in Tripoli and eastern Libya, and there have already been reports of infighting and clashes between the pro-GNC militias. It is foreseeable that many of these forces would join a national army if motivated properly and given better standing in a balanced unity government.