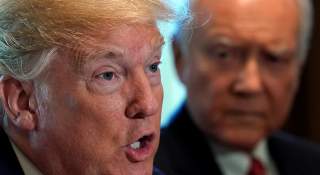 Editor's Note: In our latest Facebook Live interview (please like our Facebook page to see more of these events) Sam Tanenhaus, the former editor of the New York Times Book Review, and Jacob Heilbrunn, editor of the National Interest, discuss Donald Trump, George W. Bush, Pat Buchanan, Neoconservatives and the future of the Republican Party.

Sam Tanenhaus recently wrote an article on Karl Rove's Gilded Age. An excerpt of the article can be found below:

Every national political reporter has heard it, to the extent that it induces affectionate eyerolling when it comes up. ‘It’s 1896’ is based on Rove’s reading of the work of a small school of conservative revisionist historians of the Gilded Age (that is, historians who love the Gilded Age), one of whom, Lewis Gould, taught a graduate course that Rove took at the University of Texas.

Here’s the theory, delivered at Rove’s mile-a-minute clip: everything you know about William McKinley and Mark Hanna—the man elected president in 1896 and his political Svengali—is wrong. The country was in a period of change. McKinley’s the guy who figured it out. Politics were changing. The economy was changing. We’re at the same point now: weak allegiances to parties, a rising new economy.