Sanctions on Azerbaijan Should Go Beyond Military and Aid Embargo 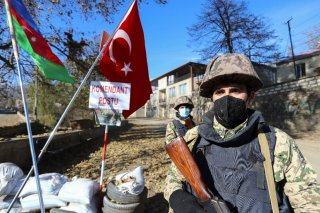 STEPANAKERT, NAGORNO-KARABAKH—Armenians are angry at the U.S. State Department. On March 26, 2020, Deputy Secretary Stephen Biegun granted Azerbaijan its annual waiver to Section 907 of the Freedom Support Act of 1992. In effect, Biegun certified that Azerbaijan both remained committed to diplomacy to resolve its dispute with Armenia and would assist to counter terrorism. Absent such certification, the United States would be unable to provide aid and military assistance to Azerbaijan.

Either there was a massive intelligence failure or diplomats lied. Azerbaijanis surprised Armenians when they launched a massive, multi-pronged assault on Nagorno-Karabakh in the early morning hours of September 27, a sleepy Sunday with Armenians at home or in church. Missiles, unmanned aerial vehicles, and airstrikes targeted military bases, key infrastructure, and civilian targets near-simultaneously across Nagorno-Karabakh, a territory which Josef Stalin had awarded to Azerbaijan at the beginning of his rule but which sought union with Armenia as the Soviet Union began to crumble and declared its independence as the Soviet Union dissolved. Over subsequent years, ethnic violence grew. Azeris launched pogroms against the Armenian Christian population in Sumgait and Baku while Armenian forces reportedly killed villagers at Khujaly. Ultimately, Armenians broke Azerbaijan’s siege of Nagorno-Karabakh and occupied Azerbaijani districts separating Nagorno-Karabakh from Armenia proper. The self-declared but unrecognized Republic of Artsakh has since ruled the territories.

In 1992, Azerbaijan and Armenia committed themselves to resolve the dispute diplomatically through the Minsk Group, an Organization for Security and Cooperation in Europe body co-chaired by France, Russia, and the United States. Diplomats say the parties agreed to a basic land-for-peace deal which neutral peacekeepers likely from Scandinavia would guarantee.

While fighting flared on occasion over the decades along the lines-of-control, the most recent war was an order of magnitude greater than anything seen in decades. Officials in Nagorno-Karabakh (where I have traveled using my own general travel funding and without the sponsorship of any Armenian, Azeri, or other organization) liken it to “Pearl Harbor.” In hindsight, they are right.

The Azerbaijan-Turkey surprise attack came after an escalating series of joint military exercise which the State Department and U.S. intelligence community seemingly ignored. Between July 29 and August 10, 2020, for example, the two armies carried out the so-called TurAz Eagle 2020 exercises involving ground and air assaults with live fire. Turkish F-16s used in the exercise remained in Azerbaijan and subsequently participated in the September 27 attack. The two armies also conducted “war games“ in May. That same month, Azerbaijan deployed a Turkish-manufactured multiple launch rocket system near the Nagorno-Karabakh border. On February 25, 2020, Recep Tayyip Erdoğan and Ilham Aliyev, the presidents of Turkey and Azerbaijan respectively, inked an agreement to provide greater Turkish weaponry to Azerbaijan. In short, Turkey and Azerbaijan appear to have decided months before their surprise attack to dispense with the Minsk process.

Azerbaijan’s abandonment of diplomacy would be reason enough for the White House and State Department to end its waiver of Section 907, but Aliyev has also violated counter-terror commitments by utilizing Syrian mercenaries who apparently have Al Qaeda or Islamic State links in the fight. Armenian officials confirm to me the capture of Syrian mercenaries. International journalists have also confirmed the participation of the Syrians. Simply put, any continued waiver for Azerbaijan flies in the face of the law and insults Congress.

Now that the guns have fallen silent, however, the incoming Biden administration should impose Global Magnitsky Act sanctions on those responsible for human rights abuses and war crimes in the conflict. Azerbaijan is an absolute dictatorship, ranked below both Cuba and the Hamas-run Gaza Strip in political freedom. The decision to deceive the United States and resort to a military surprise attack rests with both Aliyev and his wife (and vice president) Mehriban. Indeed, the Dutch Parliament has already approved sanctions on the pair for this reason.

The need for Magnitsky sanctions is also crucial because both during the war and in its aftermath, Azeri forces and Syrian mercenaries have videoed themselves torturing and subsequently executing prisoners, both military and civilian. At the very least, the United States and Europe must demand Azerbaijan identify its personnel and militias who appear on the videos and to hand them over to international authorities for war crimes prosecutions. Any Azeri or Turkish official under whom they served should also face prosecution if they gave the order to conduct atrocities or if they failed to stop such actions.

Eight years ago, I testified before Congress on the South Caucasus. At the time, I considered Azerbaijan a better ally to the United States than Armenia, but today the reality is the opposite because of two factors: First, in 2018, Armenia underwent a democratic revolution. Today, it is a democracy while Azerbaijan has slid further into dictatorship. Second, Azerbaijan’s use of Syrian mercenaries shows it has become a terror sponsor rather than counter-terror partner.

Now that the guns in Nagorno-Karabakh and Azerbaijan have fallen silent, it is easy to ignore Nagorno-Karabakh and move on. This would be a mistake. Not only is the integrity of U.S. and multilateral diplomacy at stake, but so is the credibility of U.S. law. To do nothing would both affirm the idea that might makes right and reward the aggressors. Inaction would guarantee Turkey and Azerbaijan would continue to use Islamist mercenaries in a way that could inflame ethnic tension and promote religious warfare. It is time for Congress to act, acknowledge the illegality of any further aid to Azerbaijan and ensure individuals responsible for war crimes are held to account.