A Sanctions Relief Solution for Russia 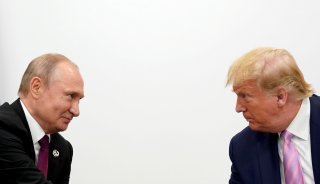 In the weeks and months ahead, Russia faces both bad news and good news. After initially reporting low infection rates within its borders, the coronavirus pandemic is quickly spreading in the country with Moscow reporting a spike in cases over the weekend. The negative economic impact of workers staying home will follow closely behind. Combined with leftover effects from the oil price war with Saudi Arabia, Russia will be facing mounting economic pressure.

The good news is that they have a recovery tool that few other countries have at their disposal. Russia has been under intense American and international economic sanctions for years, and relief from those sanctions could provide an economic boon at a critical time. Essentially it is a built-in stimulus option. And the best part is it’s free. All Russia needs to do is act like a responsible member of the international community.

As most of the world is trying to deal with preventing the spread of the coronavirus and treating those who are ill, there are countries who are already thinking about how to make an opportunity out of a crisis. Vladimir Putin is never one to miss an opportunity and take advantage of even the most precarious situation. The coronavirus crisis is no different. In fact, it appears that in its international response to the coronavirus, the Kremlin is laying the groundwork for a campaign to convince the west to roll back or repeal international sanctions, this is beyond any immediate health and humanitarian aid to respond to the virus’s spread.

In a move that contained all the tell-tale signs of good propaganda, Russia quite publicly sent a load of medical supplies to America to help treat COVID-19 patients. For added effect, they were sure to use an Antonov-124, the world’s largest cargo plane. In what was a very carefully stage-managed display, Russian state television footage of the plane being unloading showed boxes of “Aventa-M” ventilators. These ventilators, it turns out, are produced by the Ural Instrument Engineering Plant (UPZ), whose parent company has been under U.S. sanctions since 2014. There are conflicting accounts about how much of the equipment was paid for and how much, if any, was aid. Either way, it seems certain that there was at least some financial exchange, thus likely a business transaction with a sanctioned company. As one might imagine, this was quickly put to use via Russian propaganda networks like RT.

Russia similarly sent supplies to Italy, one of its closest allies in Europe who Moscow has previously requested assistance in lifting EU sanctions related to Russia’s annexation of Crimea and support for separatists in Donbas. Although according to local press reports, 80 percent of the equipment was of little or no use.

Putin is clearly laying the public diplomacy groundwork for an appeal to roll back, even repeal, existing sanctions by trying to gain goodwill and portray current sanctions as hypocritical and excessive. But sanctions against Russia were put in place for specific reasons including its illegal occupation of portions of Ukraine, human-rights abuses at home, use of chemical weapons in assassination attempts, and interfering in democratic elections in the United States and Europe. Russia has not stopped any of this bad behavior. It is still occupying portions of Ukraine. It is still interfering in Western democracies, which has only worsened since the COVID outbreak. And there is no reason to believe that the state will stop assassinating dissidents at home or abroad. In fact, a bipartisan bill in the Senate co-sponsored by Lindsey Graham (R-SC) and Robert Menéndez (D-NJ) passed out of the Senate Foreign Relations Committee in December, would add additional sanctions on Russia specifically because its malign activities continue unabated.

If Russia wishes to unleash the potentially massive benefits of sanctions relief at a time of a looming global economic crisis and avoid additional sanctions passage from the U.S. Congress, then there are concrete steps that can be taken.

First, withdraw from Crimea and pull out Russian-led forces from Eastern Ukraine, finding a deal that respects Ukraine’s territorial integrity. As three former U.S. ambassadors to Ukraine recently argued, the essentials of a deal have been established in the Minsk talks and include “a cease-fire, OSCE-verified withdrawal of Russian-led forces, return of the border to Ukrainian control, local elections and some measure of decentralized decision-making for all Ukrainian administrative regions.”

Second, the sanctions imposed by the United States in response to the use of chemical weapons in Salisbury, UK, to try to assassinate Russian dissident Sergei Skripal and his daughter can be lifted this coming August if certain conditions are met. These conditions are codified in the 1991 law that mandated the sanctions in the first place and include allowing international inspectors to verify that Russia is not making preparations to use chemical weapons and that it pays restitution to the victims of the Salisbury attack.

Third, Russia must immediately stop its interference in western democracies. If Russia were to cease any and all malign political operations, including any efforts to interfere in the 2020 presidential race, and come clean about past efforts, including the 2016 election, then the related penalties can be rolled back. In fact, if the 2020 election were to verifiably take place free and clear of Russian interference, which could prevent additional sanctions imposed by Congress, then that rollback should commence.

This may seem unlikely. This should also not preclude emergency humanitarian aid responding to the coronavirus. But unless and until Russia meets those criteria there should be no sanctions repeal of existing sanctions.

James Lamond is a senior policy adviser at the Center for American Progress, where he focuses on issues related to U.S.-Russia relations and European politics and security.