Sanctions Should Be About Changing Behavior—Not Just Punishment 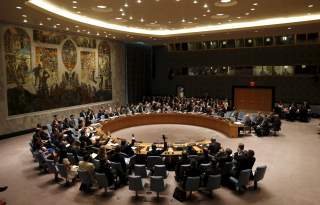 There is perhaps no other tool in the U.S. foreign-policy toolkit that elicits such widespread support in Washington, D.C. as economic sanctions. If there is a bad actor somewhere in the world doing something cruel or breaking some law or norm, the U.S. Treasury Department will slap a sanction on the perpetrator, freeze a bank account in America, or cut off a financial institution connected to the individual or entity doing the violating. Gibson Dunn, a law firm that completed an analysis of U.S. sanctions policy, has found that 1,000 people and entities were slapped with sanctions by the Trump administration last year.

There is no suggestion President Trump is interested in lessening his dependence on the tool anytime soon. It seems like a week doesn't go by without the State Department, Treasury Department, or White House announcing a new business, minister, or clearinghouse on the U.S. blacklist. Nobody is off limits—not the Canadians or Europeans, who are now forced to endure fighter tariffs for aluminum exports to the U.S. market. And not the Venezuelan government of Nicolas Maduro, whose officials have been sanctioned for everything from drug trafficking and corruption to human rights abuses and anti-democratic behavior. The Nicaraguan government has also moved up the pecking order and is now a prime target of Treasury’s long-arm; visas have been pulled, personal accounts have been closed, and sales of equipment for law enforcement purposes have been suspended until further notice. In addition, the administration is reimposing the sanctions on Tehran that were lifted under the nuclear deal. Furthermore, America is levying penalties that could cut U.S. exports to Russia in half due to Moscow’s purported involvement in an attempted assassination in the United Kingdom of a former Russian intelligence officer and his daughter. With all of this activity, Treasury Department officials could use a vacation.

None of this even begins to touch on the other end of Pennsylvania Avenue. On Capitol Hill, lawmakers in both parties view sanctions bills against evildoers the world over as one of the only things Republicans and Democrats can collaborate on. Many of the comprehensive sanctions bills that are introduced are bipartisan, designed to send a warning to hostile governments and criminal elements—who use the U.S. financial system to conduct business and store their cash—that they can’t rely on America’s political polarization to get off scot-free.

For a country with a nineteen-trillion dollar economy, and whose currency is the bedrock of the world’s trading system, Washington enjoys immense power when it chooses to wield the financial cudgel. It is emotionally satisfying to see a drug baron, an oppressive regime, or a business flouting the rules scrambling around for capital when they no longer have access to their profits. When America, in partnership with the European Union, enacted sanctions against Russia in response to its annexation of Crimea and its military intervention in Eastern Ukraine, the Russian economy was forced into a years-long recession (helped even more by lower crude oil prices). Vladimir Putin had to dip into Russia’s international reserves to address serious fiscal problems at home—and in the Beltway, there is nothing in the world that provides lawmakers and national security officials with so much joy as watching Putin deplete his savings.

Arguing that sanctions imposed by the United States have a negative effect on a target country or firm is like saying that a neighborhood’s crime problem will decrease if you deploy an extra few hundred police officers for patrol duty. We would expect the target to suffer financially. Indeed, that’s generally what happens when a person is prohibited from accessing his or her accounts in U.S. banks.

Sanctions, however, are not simply about inflicting pain on a government acting against the national security interests of the United States. The objective is far more significant than that. Utilizing the Treasury Department's team of enforcers is about compelling an adversarial government to change its behavior to get the penalties lifted. This is where the rubber hits the road in assessing the success or failure of a sanctions regime, and it is often where the debate about Washington's sanctions policy often gets lost. The question that needs to be asked is not whether sanctions are hurting a target country's bottom line, but whether economic penalties are tailored to a wholistic diplomatic strategy that assures the government being punished that it will be better off if it corrects its mistakes.

Sanctions by itself have had a spotty record in getting a foreign government to correct itself. Sanctions pressure on the Kremlin, for instance, has done nothing to convince Putin to withdraw Russian troops, equipment, and support to separatists in the Donbas—nor has it done much of anything to deter Moscow from continuing to make plans for another round of election-year meddling in America’s democratic process. A travel ban on Cuba that lasted for over a half a century was the very definition of failure, allowing Fidel Castro to rail on America as the impediment to the Cuban people’s full potential. While the oil embargo on Iran certainly prompted the mullahs to enter into a negotiation over its nuclear program, the talks only progressed when the Obama administration and its P5+1 partners were able to give the Iranians some confidence that an agreement short of surrender would be an acceptable outcome to the international community.

Too many times, the sanctions discussion in Washington is all about retaliating to a specific offense or action. Retaliation for retaliation's sake is not necessarily a bad thing in certain circumstances. Cutting off an oligarch from his billions of dollars in the West could very well have value in deterring others from undertaking similar behavior.

But when sanctions become exclusively about draining bank accounts rather than achieving a reasonable foreign policy objective, they become just another way to show the American people that their leaders are doing something to address a problem.

Image: The United Nations Security Council votes to approve a resolution at the U.N. headquarters in New York July 20, 2015. The United Nations Security Council on Monday endorsed a deal to curb Iran's nuclear program in return for sanctions relief, but it will be able to re-impose U.N. penalties during the next decade if Tehran breaches the historic agreement. REUTERS/Mike Segar TPX IMAGES OF THE DAY