Sanctions Won’t Bring Down Putin, But They Will Punish the World 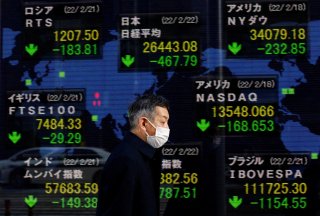 There is avid discussion that a political settlement for the Ukraine war could occur within the next one to four months, whereafter we can put this Ukraine business behind us. I believe this outcome is highly unlikely, even utterly implausible. If I am right, the inability to come to terms has far-reaching implications, all grim, for the global economy.

To say that there isn’t going to be a political settlement doesn’t mean that there won’t be negotiated agreements of any kind. But these things, from flags of truce to corridors for civilian evacuation to military pauses and ceasefire agreements on selected portions of the battlefield, will fall well short of a political settlement, a real peace treaty among all the combatants. That looks unachievable for as far as the eye can see.

The most obvious basis for this conclusion is that the West will not accept an outcome in which Vladimir Putin is seen to gain anything from the use of force. The West wants an emphatic demonstration of failure and is preparing war crimes charges. It could be argued, speculatively, that Putin will succeed in putting the muscle on Ukraine, and Ukraine will consent to an agreement on terms acceptable to Putin. But such a deal would not constitute a peace settlement. Ukraine does not consist of a single decisionmaker at the head of a unified government, but diverse groupings of people who are going to take their own view of the matter. Some may want a negotiated peace; others will want to fight on. Almost certainly the United States would continue to enlist its resources on behalf of the latter group, even if the Ukrainians themselves or other Western states were divided on the point.

Putin cannot take and occupy all Ukraine—Russia doesn’t have the forces for that—so at some point there is going to be something resembling a coherent line splitting the east from the west. It would be foolhardy to offer predictions on the location of this line or when it will harden, but it is not foolhardy to predict that it will exist and have a location, albeit perhaps a meandering and contested one. Whatever its location—whether Putin drives forward or is driven back—the resulting circumstances will be such as to forbid a political settlement, even if the parties somehow get to truces and armistices. The West and Russia couldn’t even agree on a minor problem like the disposition of Crimea and the Donbass. Ukraine is far bigger, enlisting far greater passions, putting into contention much greater interests, as each side interprets those, than previous disputes.

Bringing Putin Down with Sanctions

The war aims announced in the course of the Total Economic War Against Russia (TEWAR) suggest that the end of the sanctions comes only with Putin’s downfall and Russia’s collapse. The expectation that Putin or Russia will fall, however, is extravagant, given the historical record of states under pressure. While it is perfectly possible to inflict tremendous pain on the Russians, it is also true that few other peoples have taken more, in the way of pain and sheer malevolent suffering, than this very same people. Twenty-seven million lost in World War II. Countless millions in the thirty years before. Even if embargoed from the world, thrown into economic upheaval, and deposited in a stifling police-state, today’s Russia still looks good compared to long chunks of twentieth-century history, when Alexsandr Solzhenitsyn discovered that the worst thing in the world was to be born a Russian.

The United States thinks now about Russia in exactly the same purblind way it thought about its adversary in Vietnam in the 1960s. Another gradation of pressure—bomb them some more, back then; another brutal sanction on Putin, right now—will make them cave. In the former case, it didn’t have that effect. It made them angrier and stout in opposition. The more you bombed, said one Vietnamese observer, the more we wanted to fight you. The weapons of economic war will probably produce the same effect. In the Russian case, this conclusion follows especially because of the widespread hatred and vitriol directed against anything Russian in wide sectors of the West. That means that they only have each other. External rejection strengthens their bonds of national communion.

Brutal economic sanctions are one manifestation of what in military history goes by the name of a maritime strategy. The historic weakness of the maritime strategy is its inability to bring the enemy to a decision.

Failed wars sometimes provoke regime change, but they have to be colossal failures, like the tsar’s in 1914-1917. Assume that Russia is forced into a humiliating withdrawal in the future, and it’s not the end of the regime, no more so than were traumatic American failures in Vietnam or Iraq. As Adam Smith said during another lost war for empire, there’s a great deal of ruin in a nation.

If there is a real war between Russia and the United States, of course, all bets are off on who exactly survives that trainwreck. Assuming we can avoid plunging into the abyss, however, the alternative does not take us back to anything approaching peace. The gap between Russia and the West is larger than territory; for both sides, it involves vital stakes. In present appearances, that gap looks like a chasm. If it persists, as it is likely to persist, any hope of a political settlement pretty much vanishes as a practical possibility. Under those circumstances, an escalation of the war is the worst case; a frozen conflict, each party hunkered down in a state of “no war, no peace,” is the best case. In either case, there would be precious few opportunities for a peace treaty.

The Specter of Permanent Economic War

The peacemakers are among the blessed of the earth. Praise be to them. This iconoclastic view is deemed unsavory by wide swathes of the commentariat, who class peaceniks such as me as among the appeasement-minded and the Putin-addled. It is painful to conclude that efforts to arrive at a peace settlement over Ukraine will almost certainly prove fruitless for many years. Realism on this point, however, is mandatory. The question has huge implications for the length and severity of the TEWAR.

If the economic war were short term, the economic and financial consequences might prove manageable. If long term, we are looking at a fundamental reordering of the international political economy, a gigantic shift from globalization to neo-mercantilism. China cannot escape the whirlwind of sanctions; President Joe Biden and his team have promised extreme pressure on China if it does not break from Russia, as it is most unlikely to do. On this grim reckoning, the TEWAR on its present course promises to be relentless, insatiable, drawing commercial relationships the world over into its purview.

Economists taught for a generation that globalization was a great generator of wealth, and the neoliberal order did generate great wealth, albeit very unevenly and unfairly for many people. We can leave that argument over the benefits and burdens of globalization for another day. This day, we need to acknowledge not only that deglobalization is a powerful wealth-destroying force but also that the dismantling of globalization would fall most heavily on those who least participated in its benefits.

The TEWAR’s inexorable purpose and lifeblood is to destroy wealth. In time, it may seem an irrational policy, as not calculated to achieve its object (Putin’s removal) but capable of generating self-inflicted wounds on its makers and plenty of other wounds on bystanders. However severe the consequences, it does not follow that the policy will be easily reversed. Lifting the sanctions requires a peace treaty. A peace treaty requires compromise. Compromise will be widely condemned as appeasement. The West takes its foremost moral lesson today to be the rejection of appeasement.

“The three hundred years between 1648 and 1945 constituted an era of war between states,” writes historian David Armitage, “the last sixty years appear to be an age of war within states.” Since 1945, the vast majority of the world’s some 260 conflicts were internal, though in many of these cases external powers were drawn in, making the distinction between internal and external blurry. We don’t know the ultimate toll of Putin’s war, but by way of atrocity, everything terrible that has happened in Ukraine has happened in these conflicts. Yet in none of these cases was the decision made to enlist the whole world in forcing one of the parties to defeat. In none of these cases was the U.S. response a set of economic measures that would have such negative effects on the global and domestic economy.

Times have clearly changed. Suddenly this cause, the Ukraine cause, is deemed not only superior in importance to all the other military conflicts in the world, but also inevitably superior to every other project of global meliorism that earnest academics and think tanks have advanced for two decades. Dealing with food insecurity will have to await the fall of Putin; that seems to be the message not only of the political class but also of the financial commentariat. Of course, Western governments don’t say they’re in the business of promoting food insecurity with the TEWAR, but they are. The question is only how bad it will get, not whether it’s going to get bad.