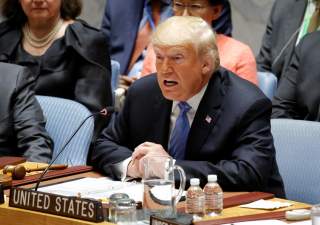 On September 26, President Donald Trump chaired a meeting of the United Nations Security Council focusing on Iran and “counter-proliferation.” Following his decision in May to withdraw from the nuclear deal negotiated by the Obama administration—the Joint Comprehensive Plan of Action (JCPOA)—Trump seized the occasion to castigate Iran for sowing instability throughout the Middle East and continuing to violate international law. In so doing, the administration is clearly striving to build support for the re-imposition of the type of sanctions that compelled Tehran to agree to the JCPOA in 2015.

There is already evidence that Trump’s decision to reimpose sanctions is damaging Iran’s oil industry. In anticipation of U.S. secondary sanctions scheduled to go into force on November 4—which exclude corporations that trade or invest in the Iranian energy industry from the American market and banking system—major multinational corporations have been pulling out of Iran. According to a recent report from the Foundation for Defense of Democracies, thirty-one European and Asian firms in the Fortune Global 500 have indicated that they will be quitting the Iranian market. From June to September, Iranian oil exports have consequently fallen by more than 25 percent. Following the introduction of U.S. secondary sanctions, exports will likely diminish further in 2019.

Of course, the ultimate purpose of economic sanctions is not to punish target states, but to compel them to alter objectionable policies. However, while the renewed U.S. sanctions will squeeze Iran’s economy, that pressure is unlikely to persuade Tehran to accede to the Trump administration’s demands.

For two reasons, what worked once in producing the JCPOA is unlikely to work a second time.

First, the scale of the Trump administration’s demands is incredibly ambitious. Whereas the JCPOA only addressed Iran’s nuclear program, the Trump administration has indicated that under any new agreement, Iran must agree to dismantle both its nuclear and ballistic missile programs and to end its support for political and military groups outside Iran—most notably in Lebanon, Syria, Iraq, and Yemen. Yet since many Iranians view those activities as vital to their security, it is inconceivable that Tehran would agree to a comprehensive agreement that restricted its freedom in all of those domains.

Second, Washington’s withdrawal from the JCPOA has heightened Iran’s reluctance to enter into agreements with the United States. There was substantial skepticism—even opposition— amongst Iranian hardliners to agreeing just to the JCPOA. Those sentiments have undoubtedly grown. The Trump administration’s withdrawal from the agreement has lent credence to the view that the United States cannot be trusted as a negotiating partner. It is therefore unsurprising that Iranian officials have refused even to enter into new negotiations with the Trump administration.

Since the Trump administration is unlikely to secure the type of comprehensive agreement it insists upon, Iran appears almost certain to sustain the activities that are anathema to the United States. Therefore, the critical question is how the United States should respond to those actions—in particular, Iranian support for militant groups throughout the Middle East?

In answering that question, it is essential to recognize that Iranian revisionism throughout the Middle East does not constitute a significant threat to vital U.S. interests. Although the United States would certainly prefer to see pro-Western governments consolidate their authority in Iraq, Yemen, and Syria, the ongoing instability in those countries poses little threat to American economic and territorial security. Moreover, although Tehran repeatedly calls for the destruction of Israel, Iran’s ongoing support to Hamas and Hezbollah does not seriously threaten the survival the United States’ closest ally in the region.

Nevertheless, the Trump administration, like its predecessors, can be expected to experience a strong temptation to counter Iranian revisionism through proxy military forces. But if history is any guide, that approach is bound to be counter-productive.

During the Cold War, the compulsion to counter communist expansion exacerbated conflicts throughout the Third World—and dragged the United States directly into a military quagmire in Vietnam. More recently, by backing the Saudi-led coalition’s war against Iranian-backed Houthi rebels in Yemen, the United States has fueled a deteriorating humanitarian crisis in which millions of people are facing famine and disease.

Given this history, the impulse to withdraw militarily from the Middle East, which President Trump has often expressed, is entirely prudent. Such a course need not, however, constitute any capitulation to Iran’s malign regional policies.

Rather than engaging in fruitless proxy wars, the United States should focus on initiatives to strengthen governance and bridge ethno-sectarian divides that render regional allies like Iraq susceptible to Iranian influence. To be sure, that is a multi-generational task. But in the long run, socio-economic development is the key to stabilizing the Middle East.

Brad Stapleton is a former visiting research fellow at the Cato Institute. Stapleton also served as an adjunct researcher at the RAND Corporation. He earned a Ph.D. in political science from the University of California, Los Angeles, as well as a BS and MA from the Edmund A. Walsh School of Foreign Service at Georgetown University.  Image: Reuters