Champion of Prudence and Realism 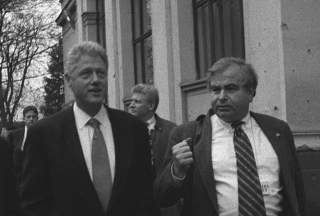 On Wednesday morning, Washington woke up to the sad news that Samuel Berger, one of President Bill Clinton’s most trusted and wisest foreign policy brains in his administration, passed away from a long battle with cancer. Berger, a man who served as Clinton’s deputy national security adviser (1993–1997) before being promoted to national security adviser in the second term (1997–2001), was nothing short of a respected member of the Democratic club of foreign policy graybeards.

His image suffered a battering after the U.S. Justice Department investigated him for illegally removing copies of classified national security documents from the National Archives in 2003. He is certainly not the first government official to be be embroiled in charges over inappropriate or unauthorized removal of national security information. And his decision to admit his mistake and plead guilty to a misdemeanor charge eventually resulted in a large fine and his security clearance being stripped. But his overall accomplishments and service to the country should not allow that sorry episode to obscure what is otherwise a distinguished career.

You don’t get the attention of the President of the United States and the Secretary of State if you aren’t a big deal in Washington. And that is exactly what Sandy Berger received after news of his death circulated to the White House and the State Department. President Obama described the former Clinton administration official as a man at the center of events at an extremely transformational period, a time when state-to-state conflict was quickly being usurped by civil wars, ethnic conflict, terrorism and economic globalization.

“Secretary of State John Kerry called him a great friend and a mentor, someone who was willing to extend a hand of counsel when a difficult issue arose. “[W]hen I first arrived in Washington and didn’t know very many people, Sandy befriended me and we remained close ever since,” Kerry said.

As President Clinton’s top national security official during his second term, Berger was confronted with a host of problems simultaneously at a time when the Clinton administration was in the middle of a scandal that transfixed the country. While Washington was at a standstill over impeachment, the world was continuing to move at a brisk pace. It was Berger’s job to make sure the NSC trains were running on time and that President Clinton knew precisely what was happening in every corner of the globe. From a looming nuclear disaster between India and Pakistan (Bruce Riedel called this period Berger’s “finest hour,” when he convinced President Clinton to push the Pakistanis to withdraw from Kashmir) to the multi-day air campaign against Saddam Hussein’s WMD program (where Berger was given the job of explaining the mission to the public), Berger worked 18-hour days to ensure to the best of his ability that menial, day-to-day events did not deteriorate into full-blown crises.

One of his biggest contributions to U.S. foreign policy, however, may have occurred long after he returned to private life. From his perch as a former statesman and through his writings and public appearances, Berger would enter into an increasingly partisan debate over how best to prevent Iran from acquiring a nuclear weapons capability. As someone who recognized firsthand the power of principled yet flexible negotiating, Berger truly believed that the Obama administration’s two-track strategy of economic pressure and negotiations was the best possible way to solve an international crisis that had added more poison to the adversarial U.S.-Iranian relationship and had the potential of inciting a nuclear arms race in the Middle East.

Over a year before the interim nuclear deal was signed in the fall of 2013, Berger would counsel patience on the need to see diplomacy through instead of rushing to leverage the military option against Iran’s nuclear facilities. In so doing, he rightly understood that to use military force without all options being completely exhausted would be tantamount to providing Tehran with the upper hand and allowing Ayatollah Ali Khamenei a perfect excuse to kick out IAEA inspectors, accelerating the construction of more uranium enrichment centrifuges. Berger was one of three former U.S. national security advisers (along with Madeleine Albright and Stephen Hadley) who met with President Hassan Rouhani face-to-face during the leader’s September 2014 trip to New York City for the annual U.N. General Assembly meetings, in order to better understand the Iranian leader’s perspective.

When the framework for a final nuclear accord was released to the public and greeted with disdain from many lawmakers in Congress, Berger took to the pages of Politico and argued with a mix of persuasion and pragmatism why the terms set in the document were the best that Washington and its allies in Europe were going to get. Doubling down on more sanctions in pursuit of a better deal, Berger wrote, is a recipe for unraveling the agreement. “The support of these countries for the oil sanctions in particular has been critical to the sanctions’ effectiveness. They will not willingly sign up for more.”

Four months later, when it looked plausible that enough Democrats would join their Republican colleagues in preventing the Joint Comprehensive Plan of Action from being implemented, Berger provided the Obama administration with significant political cover—explaining in a measured tone why the combination of intrusive and aggressive IAEA inspections and a fifteen-year cap on Iran’s uranium stockpile would buy the United States the time needed to improve the security architecture to its allies’ advantage. Congress voting down the JCPOA would have resulted in a completely different scenario, with countries like China, Russia and even Britain, France and Germany walking away from a sanctions regime that was originally designed to coerce the Iranians into a diplomatic arrangement. In Berger’s own words: “Will the South Koreans continue to block Samsung, or the Japanese, Toyota, after the Iranians not only came to the table but negotiated a nuclear agreement that the entire world—from China and Russia to Europe and the United States president—believes is a good one and only the United States Congress does not?”

Three months after those words were written, we know how the story ended. President Obama managed to retain more support from his party than even he could have hoped for, including 91 percent of the Senate Democratic caucus. The forty-two Democrats who voted against the disapproval resolution meant that GOP attempts to kill the JCPOA would languish in a filibuster and that the agreement would live on. Instead of a renewed and potentially escalating confrontation between the United States and Iran on the nuclear issue, we see today a regime in Tehran is thus far complying by the accord and meeting its commitments.

It’s impossible to know how much of a role Sandy Berger played in shifting public opinion in favor of an Iranian nuclear agreement. Indeed, Berger wasn’t the only former statesman making the argument: Colin Powell, Nicholas Burns, Gen. James Cartwright, Ryan Crocker, Madeleine Albright and Lee Hamilton were all part of the debate, offering their names in support of an accord. But by lending a strong voice on the side of tough negotiating, Berger went above and beyond many of the officials on this list.

Sandy’s friends and family can rest assured that his last act as a foreign policy heavyweight helped douse the massive fire that would likely have occurred if Congress succeeded in blocking the JCPOA.