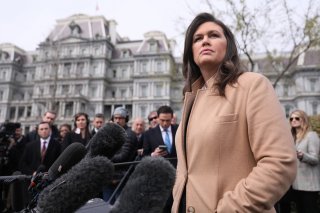 Sarah Huckabee Sanders, former White House press secretary under President Donald Trump, formally launched her bid for Arkansas governor on Monday after years of floated speculation ever since she departed from the administration in 2019.

“Everything we love about America is at stake, and with the radical left now in control of Washington, your governor is your last line of defense,” Sanders said in an eight-minute video. “In fact, your governor must be on the front line. So today, I announce my candidacy for governor of Arkansas and ask for your prayers and your support.”

Sanders dubbed the White House press secretary position as “one of the most difficult, high-pressure jobs in all of government,” as she “took on the media, the radical left and their cancel culture, and I won,” she said in the video.

In the clip, she also condemned the violence that struck the U.S. Capitol building earlier this month, calling for “law and order.”

“We’ve seen violence in our streets, at a congressional baseball practice and at our Capitol. This is not who we are as Americans. To remain free, we must have law and order,” Sanders said.

Her announcement tied heavily to her experiences working with Trump, and if her candidacy and runs proves to be successful, it could be a true test of Trump’s lasting power over the Republican Party.

With the political landscape of the GOP in a mishmash in the post-Trump era, Sanders’s run could have higher political ambitions, as several Republicans have emerged in recent months to take the reigns of the party and run for president in 2024.

Some experts think that her run could be the first step toward a presidential goal.

“I believe Sanders is sincere in her wish to serve as governor of Arkansas, but I also fully expect her to have national ambitions down the road,” Janine A. Parry, Arkansas politics expert and political science professor at the University of Arkansas, said. “She has spent her entire life—dating back to demanding a campus polling place in her college years—in politics. Not long after that, she masterminded a pivotal U.S. Senate race, one in which her candidate . . . emerged from an eight-way primary without need of a run-off and then unseated the sitting chair of the Senate Agriculture Committee,” referring to now senior Sen. John Boozman (R-Ark.) “She was twenty-seven years old. She breathes politics like she breathes air.”

“She’s been considered the lead horse in this race even before entry,” Parry added. “Not only does she clearly have exceptional political experience, but this is a small state and she’s connected to the names and circles of nearly every high-profile Republican in this state: Trump, Boozman . . . but also her father, Mike Huckabee, who served as governor here for twelve years maintaining an average approval rating in the mid-50s. She’s well situated to become the state’s first woman governor.”

The thirty-eight-year-old Arkansas governor prospect has several political machines that could garner her candidacy and help secure a win for the state, but for a presidential run, Timothy Hagle, associate professor of political science at the University of Iowa, suggested she might consider running for a Senate seat to gain stronger national recognition.

“Although it would seem that a governorship would be a better stepping stone to the presidency because of the executive experience, it seems that senators are more likely to have a good chance,” Hagle said. “A good part of the reason for this is that senators tend to get more attention from the national press than governors. That name recognition is important for appealing to voters beyond one's own state.”

Sanders reportedly began considering a gubernatorial run upon leaving the White House during Trump’s term, with the former president boasting her future in politics, particularly for governor of Arkansas.

“She is a very special person with extraordinary talents, who has done an incredible job,” Trump tweeted when Sanders resigned from her position. “I hope she decides to run for governor of Arkansas—she would be fantastic.”

Sanders has been an ardent loyalist to Trump, even after leaving her White House spot, as she’s consistently defended him through her spot on Fox News, where she joined as a contributor in September 2019.

“For now, I’d say Sanders just wants to win her current race and do what she can to serve the people of her state,” Hagle said. “She’s young enough to consider something else later, whether it's the presidency or possibly the Senate.”