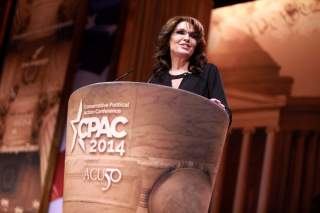 So now Sarah Palin has cast her lot with those Republicans who have suggested the GOP House should consider impeachment proceedings against President Obama. This bolsters the political judgment of those who have never managed to forgive John McCain for placing this silly woman on the 2008 Republican presidential ticket and thus giving her a national profile.

Impeachment is deadly serious business—and was meant to be. In the early hand-wringing of Watergate, when it was becoming increasingly clear that the trail of malfeasance was reaching Richard Nixon’s Oval Office, one commentator attributed the country’s lingering discomfort with impeachment to a sense that it was all too reminiscent of the regicide of previous centuries. Ultimately, the House moved toward impeachment proceedings, but only after a broad consensus had emerged as to the extent and seriousness of Nixon’s transgressions.

But even then, the House actions drove a political wedge through the nation, as any effort to remove a president inevitably will. Human nature being what it is, presidential loyalists will always denounce such actions as politically inspired and hence an assault upon the country’s hallowed political institutions. Emotions will reach white-heat intensity on both sides.

In the case of Richard Nixon, the president spared the country from the worst of elements of this ordeal by resigning from office after the House Judiciary Committee approved three articles of impeachment against him. Even though the president’s congressional support was collapsing after an Oval Office tape revealed active presidential involvement in an obstruction of justice, the full House vote and a subsequent Senate trial would have generated even more political rancor than what actually emerged during that sad episode. And what emerged was widely viewed on both sides of the issue as a political “nightmare.”

Further, Sarah Palin is old enough to remember, if she was paying attention, the fallout that ensued when the Republican Congress went after President Bill Clinton with proceedings that led to a House impeachment and a Senate trial. House articles of impeachment charged him with perjury and obstruction of justice in connection with his affair with White House intern Monica Lewinsky. Senate impeachment advocates didn’t come close to getting the two-thirds vote needed to remove the president, and it became clear afterward that the nation had looked on in agitated bewilderment at this effort to negate Clinton’s reelection victory.

The president’s approval rating actually improved during the impeachment process, and polls indicated only a third of Americans supported the action. Later, however, when it became clear that the president wouldn’t be removed from office, surveys indicated half of Americans supported the House impeachment while 57 percent said the Senate acquittal was the right decision. In other words, while the American people were disgusted by Clinton’s behavior and even accepted, in retrospect, his political ordeal, they didn’t want him removed from office.

If that is not sufficient to give pause to impeachment advocates, the case of Andrew Johnson bears examination. Johnson, who inherited the presidency at the death of Abraham Lincoln, got himself crosswise with the American people, and particularly Congress, over Reconstruction policy following the Civil War. Throughout his tenure, he seemed determined to ensure that freed slaves did not get a foothold into the democratic process, and his terms for readmitting former Confederate states into the Union were remarkably mild.

His leniency generated a backlash from agitated “Radical Republicans” in Congress, who in early 1866, passed two measures designed to protect freed southern blacks from local measures aimed at excluding them from politics and locking them into a subservient social status. Johnson vetoed both measures, largely on the ground of states’ rights, but his veto messages also were laced with elements of racialist sentiments. He then opposed ratification of the Fourteenth Amendment to the Constitution, which established birth citizenship and guaranteed all U.S. citizens equal protection of law, including state law.

Voters responded by giving the Republican opposition veto-proof dominance over both houses of Congress, and that began the so-called Radical Reconstruction, which pushed Johnson onto the political defensive. Congress essentially ran the government, often in league with Johnson’s own Cabinet members, particularly the tough-minded war secretary, Edwin Stanton. Fearing Johnson would fire Stanton, Congress passed, over Johnson’s veto, the Tenure of Office Act, which placed restrictions on the president’s ability to discharge his subordinates.

When Johnson sought to fire Stanton in contravention of the Tenure Act, his action contributed to his House impeachment and a Senate trial in which he escaped conviction and removal from office by a single vote.

Beyond the profound political tensions unleashed by these postwar issues, this episode raised some serious constitutional questions, not least whether it was a healthy precedent to have Congress take over the government’s executive branch, even in a time of crisis. The Tenure of Office Act was patently unconstitutional, as later affirmed by the U.S. Supreme Court in a 1926 case involving similar issues. The Court cited the Tenure Act as an unconstitutional congressional infringement upon presidential prerogative. Thus we have the spectacle of Congress using impeachment to seek the destruction of a president for resisting its own illicit law.

It’s interesting to speculate on what would have happened if Johnson had been convicted and impeachment had become, as a result, a conventional political tool to be applied whenever Congress finds itself locked in a bitter political dispute with the president. That would not have been a healthy development for the Republic.

Now we have Sarah Palin and a few current and former members of Congress arguing by extension that that is precisely how the impeachment power should be viewed—and applied. True, the president’s arrogation of power, much discussed these days, is a serious matter that needs to be pressed vigorously in the political arena. And all conventional tools should be considered fair game as the opposition seeks to blunt Obama’s misuse of presidential authority through regulatory manipulation and executive overreach. But impeachment isn’t the answer.

Palin and her allies on the issue will be largely ignored, of course, as they should be. But perhaps those calls should stir some contemplation on the potent implications of the impeachment power. It is a necessary tool in the country’s institutional balance of power, but like all power, it can be easily abused. And this particular blunderbuss of a political weapon, so certain to generate powerful crosscurrents of political emotion whenever it is brought into play, should not be casually viewed or applied. It’s there when the country really needs it and should be reserved for such times.