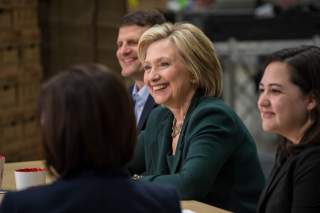 All along the Democratic debates for the presidency have been something of a sideshow. This was never more than the case than last night. The reasons for their insignificance have been fairly obvious.

The first and most immediate is that Hillary Clinton is not being seriously challenged. Oh, her opponents tried to rough her up somewhat on domestic issues but she swatted their feeble attacks away with ease. The roughest blow was landed by Bernie Sanders against former Maryland Governor Martin O’Malley who bragged about how he had strengthened gun laws in his state. Sanders observed, “With all due respect, I think it’s fair to say that Baltimore is not now one of the safest cities in America.” No, it isn’t. The Washington Post reports today that the city has just crossed the 300 homicide mark, a number it last reached in 1999.

For Clinton, Senator Bernie Sanders serves as a useful foil for her. He allows her to avoid the impression that the race is merely a coronation. His fiery denunciations of Wall Street, the ubiquitous foe of the Democratic left and the Tea Party right, also permit Clinton to present herself as a moderate in the context of her opponents.

Another reason for the soporific nature of the debate is that the Democrats lack the kind of larger than life candidates that the Republican party is featuring. There is no big identity crisis in the Democratic party about what constitutes liberalism or progressivism. If the best former Maryland Governor Martin O’Malley can do is to accuse Clinton of peddling “weak tea,” he’s a long way off from Donald Trump equating Ben Carson with a child molester or announcing about the Islamic State, “I would just bomb those suckers.”

It was also the case, of course, that the debate was overshadowed by the events in Paris. But even here the critiques of Clinton were, by any standard, quite gentlemanly. They centered in part on her vote in support of the George W. Bush administration’s war on Iraq. Sanders, for example, said, “Let me have one area of disagreement with the secretary. I would argue that the disastrous invasion of Iraq — something that I strongly opposed — has unraveled the region completely and led to the rise of Al Qaeda and ISIS.” O’Malley vented his frustration about messes: “Libya is a mess. Syria is a mess. Iraq is a mess. Afghanistan is a mess.” Clinton’s opponents started to sound like left-wing realists, what with Sanders declaring he was no fan of “regime change.” Will they soon declare, ala Trump, that it’s fine for Russia to carry on the fight in Syria while America stands aloof?

The most revealing moment of the debate came when Clinton refused to agree with Senator Marco Rubio that America is at war with radical Islam. Clinton hedged, fudged, waffled, doing everything and anything but acknowledging that something has gone amiss with a strain of Islam. In her anodyne words, “We are at war with violent extremism. We are at war with people who use their religion for purposes of power and oppression.” These are fine distinctions indeed. Why not tell the truth, which is that a sinister and diabolical branch of terrorists, one that espouses a virulent brand of Islam, is out not simply for power and oppression but is employing Leninist tactics to attempt to conquer what it deems its foreign enemies? If her Republican were shrewder, they would start talking about the need to combat a nascent evil empire in the Middle East.

Certainly it’s no accident that Rubio is taking the most neoconservative approach to foreign affairs among the candidates, though perhaps Jeb Bush will end up giving him a run for his money. Indeed, last night at a sumptuous dinner party in honor of Fox News correspondent James Rosen at the Georgetown home of defense expert Michael Pillsbury, I was reminded of the former suzerainty of the neocons in Washington with leading former administration officials such as Douglas J. Feith and I. Lewis “Scooter” Libby in attendance. The occasion was the publication of Rosen’s new book, a lengthy interview with former vice-president Dick Cheney, titled Cheney One On One. When it comes to issues like torture and Cheney’s manipulation of the interagency process, Rosen does a brilliant job of teasing out a wholly unrepentant Cheney’s taradiddles. Rosen announced at the gathering that he “counted himself among Cheney’s admirers.” But this is no puff piece: highly recommended for Cheney fans and detractors alike.

But I digress. The neocons are at least a year away from returning to power, though they (and we) could also get a modified version in the form liberal hawk Clinton. During the debate, Clinton showed herself once more an expert at splitting differences. She rather noted about the conflict against the Islamic State, “this cannot be an American fight, although American leadership is essential.” Still, she has a point: it will take more contributions from Europe and the assistance of Turkey to make real progress in terminating the reach and sway of these militant Islamists.

None of this, however, makes for the kind of exciting fireworks that characterize the GOP debates. As the Republican candidates savage one another, Clinton will most likely cruise in rather boring fashion to the finish line, husbanding her resources for the main battle. Which is why the GOP should be thinking very hard indeed about whom it selects to face off against her.