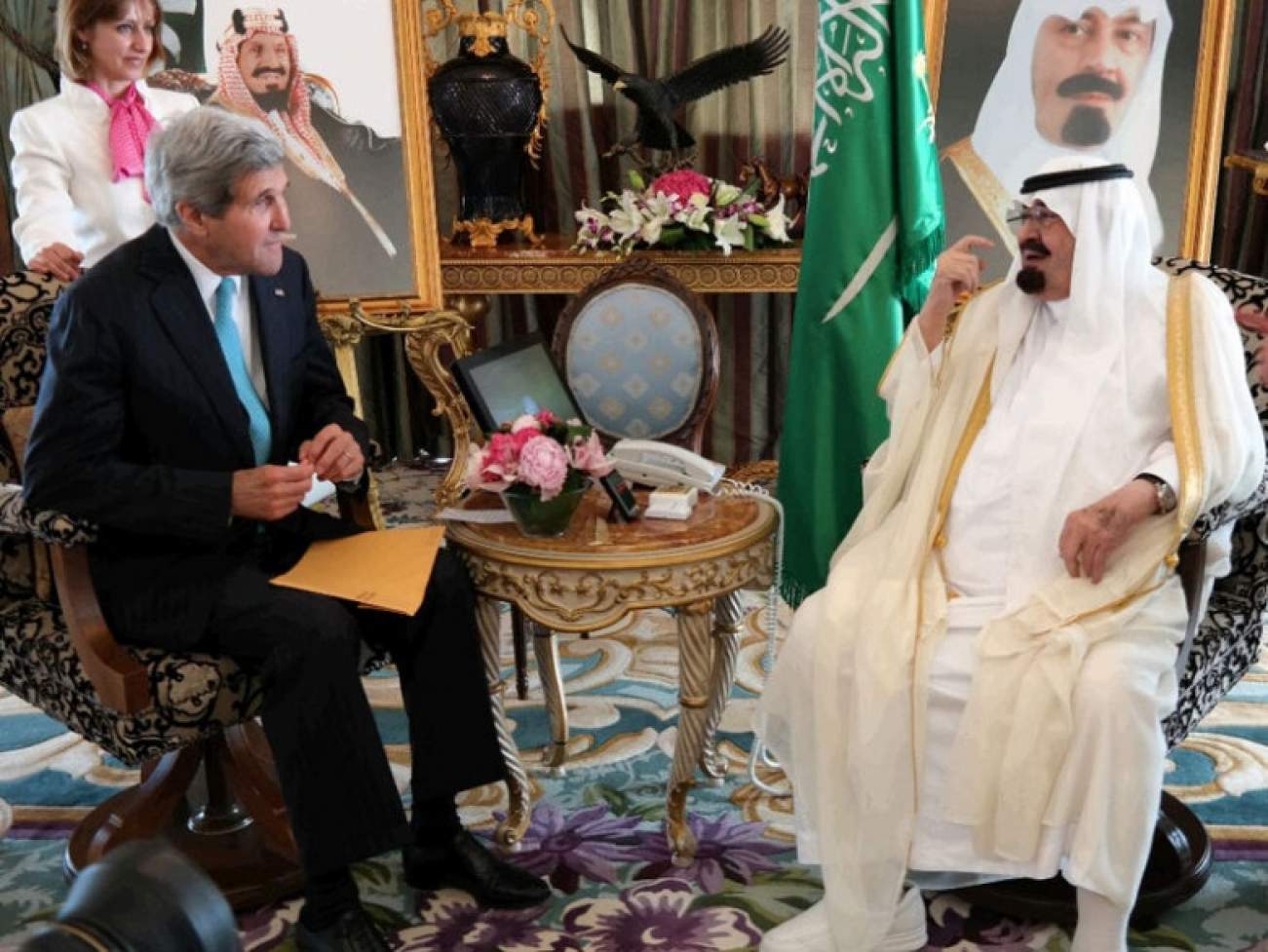 At least as likely, however, both Riyadh and Islamabad would prefer to mask their cooperation, with the Saudis claiming, if implausibly, that they had developed their own indigenous nuclear capability, and the Pakistanis denying any involvement. At best, these fabrications would offer a diplomatically convenient way for states—possibly even the United States—to keep the punitive focus squarely on Iran, rather than on Pakistan or Saudi Arabia.

In almost any conceivable instance of a Pakistani nuclear transfer to Saudi Arabia, Pakistan’s leaders would have to be convinced that they could survive the consequences with neighboring Iran. Pakistan has already suffered a great deal from being caught between Iran and Saudi Arabia. Their sectarian rivalry was exported to Pakistan in the 1980s, when both sides indoctrinated, trained and funded brutal militant proxy groups, in turn contributing to a vicious cycle of communal separation that persists to this day. In 2013 alone, 650 Pakistanis died and over 1,100 were injured in Sunni-Shia violence. Like most acts of terrorism, the death toll pales in comparison to its broader political consequence; Pakistan’s sectarian attacks threaten to shred the unity of a nation nominally founded as an inclusive homeland for South Asian Muslims.

Although there is no longer evidence of official Saudi support to these groups, Pakistanis complain bitterly about private Saudi donations to mosques, madrassas and organizations behind the attacks, and many also fear that Iran could do much more to fuel reprisal attacks by Shia hit squads if Tehran wanted to cause trouble for Pakistan. In the past, Iran has also turned up the pressure on Pakistan in other ways, including by working closely with India to support proxy groups in Afghanistan and by allowing India to use the port of Chabahar along the Arabian Sea as a means to circumvent Pakistan and gain overland access to Central Asia.

Such concerns will almost certainly continue to lead Islamabad to play a diplomatic balancing act in its dealings with Tehran. That said, if Islamabad judges the potential for an Iranian nuclear breakout to be low and believes that preliminary nuclear dealings with Saudi Arabia (prior to the unveiling of an actual nuclear transfer) can be covert and deniable, then the immediate benefits of an offer from Riyadh would be nearly impossible for Pakistani leaders to resist. This is almost certainly the situation they face today.

To make sense of Saudi Arabia’s geopolitical options now and into the future, it will be increasingly necessary to take Riyadh’s relationships with India and Pakistan into account. This holds true even though the primary battleground for Saudi-Iranian rivalry remains the Middle East, and Saudi-U.S. military and intelligence cooperation will persist for years to come. Keeping New Delhi from closer ties with Tehran will be crucial as India grows into a global economic, political, and military power. Utilizing Pakistan as a counter to Iran’s threats at the opposite ends of the security spectrum—terrorist proxies and nuclear weapons—will be even more vital to Riyadh.

The potential for a nuclear transfer from Pakistan to Saudi Arabia is by far the most consequential aspect of Riyadh’s dealings in South Asia. Although fraught with risk, the looming threat of a transfer from Pakistan to Saudi Arabia also holds potential advantages. The more credible the threat, the more Tehran will need to take it into account as it calculates the strategic benefits of crossing the nuclear-weapons threshold. Combined with the threat of Israeli air strikes on Iranian nuclear facilities, the risk of a broader nuclear domino effect in the region would also help to motivate other states to enforce the sanctions regime against Iran until a deal is done.

Like any deterrent policy, the greatest costs would be suffered only if it fails; that is, if Iran rejects or circumvents a nuclear deal. Even then, however, the regional-security picture would be made only incrementally worse by the simultaneous emergence of two new nuclear states as compared to a lone Iranian breakout. If anything, the regional nuclear balance against Iran would be easier to maintain, and less of the weight would rest on Israel’s shoulders.

Nuclear issues aside, Riyadh is successfully finding other ways to harness its relationships in South Asia. Whether by purchasing Pakistan-made arms for Syrian rebels, securing favorable Indian votes in the IAEA, or closing potential loopholes in the Iran sanctions regime, the Saudis have played South Asia more effectively than the Iranians have. Riyadh will continue to hold important tools of influence in both Islamabad and New Delhi because of its wealth, energy supplies and status as host to an enormous population of visiting South Asian workers who collectively send home billions in remittances each year.

Viewed from the South Asian perspective, Saudi Arabia’s regional security policy will always be judged by how it plays into the Indo-Pakistani context. There are reasons to hope that Riyadh can play a stabilizing role. For instance, if Saudi counterterror cooperation with New Delhi on Indian-born LeT operatives is just a start, then Riyadh will have other strings to pull as well, from controlling financial networks to limiting travel within its borders, that could also be directed against groups like the Haqqani network that have attacked Indians in Afghanistan. A more muscular Saudi campaign against these groups would improve security in India and would also send a firm message to sympathizers and backers inside Pakistan that the use of terrorist proxies against India is no longer something Riyadh condones.

On the other hand, if such Saudi moves are not handled with great care, they would backfire by contributing to Pakistan’s security anxieties and sense of isolation. For India, unofficial Saudi support to Salafist groups in South Asia and Riyadh’s defense ties to Pakistan will undoubtedly worry policy makers in New Delhi. All told, Riyadh’s pursuit of closer relationships with both India and Pakistan, without being sucked into the paralysis of their own hyphenated (Indo-Pakistani) conflict, will require great diplomatic finesse.

How Washington Should Play the New Saudi Game in South Asia

The United States has never been able to dictate or control Saudi Arabia’s foreign policy, but Washington retains unparalleled diplomatic access to Saudi leadership—owing in part to billions in high-tech defense sales—that affords U.S. policy makers a chance to explain their priorities and interests with respect to South Asia. Washington should make South Asia a regular focal point in future dialogues with Saudi senior leaders.

Although there will be a strong temptation to try and dissuade the Saudis from pursuing a nuclear-weapons capability via Pakistan, that approach will almost certainly be a waste of time. Washington should accept that the Saudis (like the Pakistanis before them) will try to go nuclear if they believe their mortal enemy will otherwise enjoy an overwhelming strategic advantage. Neither sales of conventional armaments, nor realistic U.S. security guarantees will solve Riyadh’s security dilemma. For the United States, the preferred means by which to reduce the likelihood of a Saudi nuclear program will be by successfully concluding and implementing a serious deal with Tehran.

U.S. officials should instead make the best of the Saudi-Pakistani nuclear nexus by embracing the threat as a deterrent against Iran as well as potential defectors from the present international sanctions regime. Through diplomatic channels with friends, allies and the Iranians themselves, U.S. officials should quietly share the assessment that a nuclear transfer between Pakistan and Saudi Arabia is a realistic scenario and nearly impossible to forestall if Iran crosses the threshold. At the same time, U.S. officials should explain that they do not anticipate a Pakistani-Saudi transfer under any other circumstances, given the costs that both Islamabad and Riyadh would incur from moving first.

Separately, Washington should use secure channels to communicate to the Pakistanis and Saudis that as long as any potential nuclear transfer takes place only after an Iranian breakout, the principal U.S. concern would be the safety and security of nuclear materials in transit and after deployment in Saudi Arabia. In the unlikely event that either Riyadh or Islamabad is willing to discuss the topic at length, perhaps as a hypothetical scenario or in a Track II setting, U.S. officials should try to ferret out how the Saudis understand the challenge of balancing a nuclear Iran and how the Pakistanis envision their own ability to weather the likely Iranian reaction. U.S. wargaming exercises that play out the post-nuclear regional balance would be useful ways to inform those conversations.

On other fronts, the deepening of counterterror cooperation between Saudi Arabia and India serves U.S. interests and should be advanced along two tracks in Washington’s dealings with Riyadh. First, U.S. officials should work to improve operational intelligence sharing so that South Asian terrorists like Ansari are more easily tracked, apprehended and extradited. A three-way Saudi-U.S.-Indian counterterror dialogue and standing intelligence coordination cell should be started to advance this effort.

Second, Washington should continue using diplomatic, financial, law enforcement and intelligence ties with the Saudis to press the point that Pakistan-based terrorists, including those lacking direct Al Qaeda ties, represent a significant threat to regional and international security. Despite past efforts, U.S. officials have never managed to translate the aggressive post-9/11 security measures the Saudis have used at home against Al Qaeda into a wider campaign that would dry up resources flowing to other groups engaged in terrorism. Part of the problem is that neither Riyadh, nor Islamabad wishes to pick new fights with the full array of radical groups they now face. Another part of the problem is that both Pakistan and Saudi Arabia also have a long history of using terrorist groups as proxies, and a persistent difficulty drawing lines between the radical organizations they support and those they oppose. Pakistan, for instance, has always tried to differentiate between “good Taliban” and “bad Taliban,” defining different militant groups not by their worldview, but by whether they serve or oppose Islamabad at any given time.