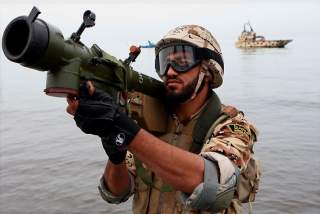 It’s often assumed that Saudi Arabia is as big a concern to Iran as Tehran is to Riyadh. Recent statements by Iranian officials seem to confirm this, as do recent Iranian efforts to derail Saudi influence in the region. But while Iran is indeed Saudi Arabia’s most important foreign policy concern, Saudi Arabia isn’t even in Iran’s top concerns. This mismatch in threat perceptions further destabilizes the region.

Fears of regional Iranian hegemony are longstanding and visceral. The rivalry is multilayered: political, religious, cultural and ethnic. Tehran has always been a force to be reckoned with in the region—something it doesn’t hesitate to remind the Arabs of. Iran also increasingly uses its proxy groups to assert itself in the region, which the Saudis view as illegitimate interference in Arab affairs.

For Saudi Arabia, the essence of the threat is not a potential Iranian invasion; rather, it is that Tehran consistently questions the House of Saud’s political and regional legitimacy. For example, Iranian officials question Riyadh’s guardianship of the most important Muslim holy sites. Last month, Supreme Leader Ayatollah Khamenei referred to the Sauds as “puny Satans” and “heartless, murderous Saudis.” He continued, “the world of Islam must fundamentally reconsider the management of the two holy places and the issue of Hajj.” Saudi Arabia rightfully feels Iran talks down to it, making it clear that it doesn’t take Riyadh seriously.

In response, Saudi Arabia adopted a more assertive multitiered regional strategy to counter Iran. This further intensified the rivalry and led to the opening of new fronts. In Syria, Riyadh opposes any peace plan that involves keeping the Assad regime, Iran’s protégé, in place. Riyadh’s campaign in Yemen is intended to check perceived Iranian presence in its own backyard. Riyadh is also upping its presence in Afghanistan—traditionally an Iranian arena—by supporting various groups that undermine Iranian influence. After all, Afghanistan is to Iran what Yemen is to Saudi Arabia.

Conversely, Iran is dismissive of Saudi Arabia. It lags behind big-power relations and countering extremism in the ranking of Iranian foreign-policy priorities. Despite much of its official rhetoric, Iran’s focus has always been the major players: the European Union, the United States, Russia and China. Iran views itself as a natural leader in its neighborhood, with a strong sense that others in the region should treat its interests deferentially.

Iran believes that it derives legitimacy from inside, from its history and culture, whereas the Gulf Arab states derive it from the approval of others and their newfound wealth. It views the House of Saud as lacking history and indigenous capabilities, but compensating for it with lots of money. Iran thinks the lack of Saudi indigenous capability and its reliance on Western protection and arms undermines Saudi Arabia’s standing. This makes Riyadh an unworthy opponent in Iranian eyes.

As a result, Iran’s regional foreign policy is not constructed around a potential Saudi threat. Rather, it aims to penetrate weak systems in the region to make itself indispensable to parties on the ground and project power. Iran would be involved in every arena it is currently engaged in in the region, regardless of Riyadh’s presence. In Syria, Iran believes it has a vital interest in maintaining the regime structures in place to secure its corridor to Hezbollah and to check Islamic State. In neighboring Iraq, it wants to secure its border, economic interests, and its influence over various factions, including the significant Shia constituency. In Afghanistan, Iran aims to secure its border, maintain some level of stability to avoid waves of Afghan refugees coming to Iran and prevent the rise of extremist groups.

Yemen is the exception to the rule. Yemen has little strategic significance to Tehran. But the significance of Yemen to Saudi Arabia makes it an easy and low-cost way to poke Riyadh in the eye.

So while the Iranian threat drives Saudi Arabia’s regional policy, Riyadh is only a small piece in the Iranian calculation. Under normal circumstances, this is good news: mismatched threat perceptions should make it easier to settle differences.

But this is the Middle East.

Saudi Arabia’s threat perception has led it to engage in and intensify conflicts that it wouldn’t be involved in to begin with had it not been for Iran. Saudi involvement in Yemen is sucking up resources and creating divisions with its Gulf allies and the United States. Tehran, for its part, smirks at the idea of Riyadh using up its resources and damaging its prestige and alliances, thinking it’s countering Iran.

Meanwhile, Tehran uses these arenas as easy opportunities to further undermine the Saudis, without any significant changes to its broader foreign policy. It also pokes at the Saudis through a low-cost PR campaign that involves op-eds in U.S. newspapers, indicating the audience is not the region but rather the West. Tehran wants to signal to the West that it is a natural ally in the fight against groups like Al Qaeda and ISIS. It also wants to discredit Riyadh, which it argues is the source of these groups’ destructive ideology.

But Iran is also a victim of its easy preying on Riyadh. Saudi threat perceptions, created and encouraged by Iranian policies, have further destabilized the region. Today, the Middle East counts several failed or failing states—a breeding ground for extremism. While Iran blames extremism on Saudi ideology, its own dismissal of Saudi concerns helped create a fertile environment for these groups, which also threaten Iranian national security.

The common perception is that Iran and Saudi Arabia see each other as equals. In reality, Saudi Arabia’s focus is on countering Iran, but for Iran, Saudi Arabia is an afterthought. The mismatch in threat perceptions prevents any progress towards dialogue between the two countries, an essential step towards lessening regional tensions.