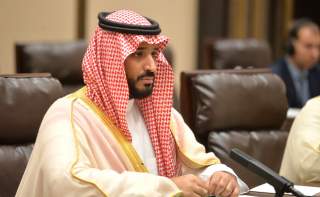 When Congress voted overwhelmingly last month to override a veto by President Obama and pass a law allowing victims and survivors’ families of the September 11, 2001, terror attacks to sue Saudi Arabia, foreign policy experts in both countries predicted a new crisis in Saudi-U.S. relations.

In addition to violating the long-standing principle of international law that insulates governments from suits by individuals, critics said, the bill was insulting in its suggestion that the Saudi government was somehow responsible for the attacks. While official statements in Washington and Riyadh were restrained, independent analysts said the measure would exacerbate existing tensions in the bilateral relationship and might lead the Saudis to reduce their cooperation on antiterrorism activities. Saudi citizens lit up social media with outrage, calling for drastic retaliatory action. Some rallied around a call to boycott American products and services.

That was then. This week, a long article in a Riyadh newspaper reviewing Obama’s record in the Middle East didn’t even mention the Justice Against Sponsors of Terrorism Act, or JASTA. In a week of conversations, not one Saudi brought up the subject, addressing it only when asked. The comments on Twitter and WhatsApp have moved on to other topics.

Several months before the congressional vote, Saudi foreign minister Adel al-Jubeir said that enactment of the bill might force the kingdom to sell some $750 billion in assets held in the United States, according to the New York Times. He has been considerably more circumspect since the bill actually became law, focusing his criticism on the worldwide implications for the doctrine of sovereign immunity.

That is not to say that government officials and business executives here are not worried about the bill’s potential impact. Basheer Al-Ghuraydh, executive director of the U.S.-Saudi Arabian Business Council, said gloomily that JASTA presages “a long decline in bilateral relations.” But others noted that that so far nothing has actually happened and that the country has much more immediate and pressing concerns, such as the war in Yemen and the fiscal crisis caused by low oil prices.

Besides, “there’s nothing we can do about it,” a young investment banker said. He and others said they were hopeful if not confident that Congress would revisit the issue in its upcoming lame-duck session. Even if that does not happen, several Saudis said, the wording of the law makes it unlikely that any plaintiffs will prevail in court.

The law provides that in a legal case arising from an attack by a terrorist group on U.S. soil, “liability may be asserted as to any person who aids and abets, by knowingly providing substantial assistance, or who conspires with the person who committed such an act of international terrorism.”

No such link has been established in the 9/11 cases, and it is not clear whose testimony might provide one. Multiple investigations of the attacks have yielded no persuasive evidence that the government of Saudi Arabia or any senior officials of the royal government promoted the hijackings or assisted the nineteen terrorists who carried them out. At least one minor government official did have contact with at least one of the fifteen Saudi hijackers in California, and some of them may have received the financial assistance normally provided to any Saudi student in the United States, but no direct link to the September 11 events has been established.

Business executives who have a longer time horizon and have investments to protect expressed concern about the possibility, however remote, that a finding of Saudi liability could result in seizure of government-owned assets in the United States. The biggest exposure appears to be that of Motiva Enterprises, a joint venture of Shell and the Saudi state oil company that owns three large refineries in Texas and Louisiana and serves 8,200 Shell gasoline stations across the South.

Another issue is that the possibility of successful legal action could complicate plans to sell shares to the public of all or part of the kingdom’s huge state-owned oil company, Saudi Aramco.

One way the Saudis could fend off a liability judgment would be to negotiate a settlement with the plaintiffs, but they have insisted they have no intention of doing that because they have no responsibility for what happened.

Meanwhile, the wide-ranging cooperation between Washington and Riyadh on security issues and regional stability challenges goes on uninterrupted. This week the chairman of the Joint Chiefs of Staff, Marine Gen. Joseph Dunford, was in Riyadh for talks with Saudi officials, including the defense minister, Deputy Crown Prince Muhammad bin Salman. And in an interview with the English-language Arab News, the Saudi ambassador in Washington, Prince Abdullah bin Faisal bin Turki, restated the upbeat official line: “It is important to note that the two countries successfully navigated various challenges throughout the history of our relationship,” including the fight against Al Qaeda, the group that organized the 9/11 attacks. “We might at times differ on certain tactics, which is normal between close allies and friends. However, our overall objectives remain aligned, and we look forward to continuing our work with the next administration.”

For the moment, at least, there is a lot more talk about that “next administration”—the presidency of Donald J. Trump—than about JASTA.