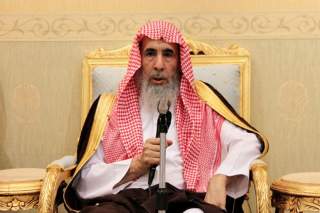 On Friday, September 2, a group of over fifty Saudi clerics joined in a petition condemning “Russian intervention against Syria” and urging rebels there to join “jihad against the enemy of God.” They also condemned Russians as “fanatics of the cross” and labeled Moscow’s intervention there as a modern Christian “crusade.” According to Reuters, the individuals involved were not government officials, and the mufti of Moscow and other Russian sources took pains to characterize the petition as “a strictly independent action.”

However, last week, a prominent Saudi-based religious television network posted pictures from a ceremony honoring its chief executive that showed Nasser al-Omar, the petition’s most prominent endorser, smiling side by side with Abdullah al-Mutlaq, a member of Saudi Arabia’s Senior Ulema Council, the country’s highest religious body.

With over 1.8 million followers on Twitter, Nasser al-Omar is one of the most influential Saudi clerics on social media, according to several studies. He even supervises the website on which the jihadist petition was posted. According to reports from news outlets and human rights groups, in 2008 he joined a petition that “accused Shiites of sowing ‘strife, corruption and destruction among Muslims,’” but instead of the state pushing back against him, the Saudi regime arrested a Shiite preacher who objected to these articulations of religious intolerance. Earlier this year al-Omar was a guest at the Ramadan iftar of Qatar’s Emir Tamim Al Thani and was seen holding hands with the grinning emir.

Al-Omar was also photographed last month visiting with Abdulmajeed al-Zindani, a onetime Osama bin Laden mentor whom the U.S. government sanctioned in 2004 on charges of recruiting and purchasing weapons for Al Qaeda. Zindani has sought refuge from the Yemeni civil war in Saudi territory, in apparent violation of a United Nations travel ban, also on terror finance charges. Yemeni papers even published a photograph they claimed was of Zindani receiving an audience with Saudi Arabia’s senior-most religious authority, Grand Mufti Abdulaziz Al ash-Sheikh.

Zindani is not the only alleged Yemeni backer of Al Qaeda who has apparently been hosted on Saudi territory, as Saudi state TV recently hosted Abdulwahhab al-Humayqani, who is under American terror finance sanctions on charges that include reportedly having been an acting AQAP emir for the Yemeni province of al-Bayda’. He was also captured on video for an interview that al-Jazeera indicated took place in the Saudi capital of Riyadh.

Abdullah al-Mutlaq has been a member of Saudi Arabia’s Senior Ulema Council for over a decade. He memorably condemns interaction between men and women even in online venues such as social media because “the devil would be present.” According to Gulf News, he also weighed in against a school project by Israeli-Arab master’s students to create an online Quranic resource on counseling issues, by calling it a tool “to serve Israeli Zionist projects in the world” and indicating that the resource “should not be trusted by Muslims since it is run by Jews who openly show their hatred to Islam and Muslims.”

Critics have previously accused Al-Majd Television Network, whose chief executive was honored by Mutlaq and Omar, of broadcasting “Saudi hate TV,” promoting intolerance toward America and adherents of other religions. Since then, the network apparently granted an award during the hajj last month to Saad bin ‘Ateeq al-‘Ateeq, who served for years as the preacher in residence at Saudi Arabia’s national guard academy and who has been witnessed several times on video beseeching God before crowds of worshippers to “destroy” Christians, Jews, Shiites and Alawites. Like the alleged terror financier al-Humayqani, ‘Ateeq has recently been a guest on Saudi Arabia’s state news channel, where he encouraged intolerant views of the conflict in Yemen, calling Shiites a term of abuse and ominously explaining that “we are cleansing the land of these rats.”

As Bruce Riedel noted in an extended profile of Saudi Arabia’s new leadership, King Salman has recently “moved the kingdom even closer to the Wahhabi establishment,” firing the only woman in the cabinet and assembling “often with notoriously reactionary members of the clerical elite.” Indeed, last week Salman received prominent princes at his Jeddah palace with several hardline clerics at his side.

Sitting immediately next to the king was Saleh al-Luhaidan, who “dominate[s]” the Senior Ulema Council along with other older conservatives. Al-Luhaidan was once suspended from his position as Saudi Arabia’s senior-most jurist after he allegedly called for the execution of media owners who broadcast “depravity.” During the U.S. occupation of Iraq in 2005, he also reportedly encouraged any young Saudi who “is capable of entering Iraq in order to join the fight” to face “an enemy who is fighting Muslims,” in spite of “evil satellites and drone aircraft.”

Also flanking King Salman on the same side last week was Nasser al-Shethri, a Saudi cleric who was promoted in January by the new ruler to be a personal advisor to his court. This was despite Shethri’s controversial approach to condemning the Islamic State by calling it “atheist” and proclaiming it is “more infidel than Jews and Christians.”

These developments compound concerns about Saudi Arabia’s approach to extremist rebels fighting in Syria now that Russia has intervened on the side of the Assad regime. They also suggest that the kingdom has failed to honor the Jeddah Communiqué that Secretary of State Kerry negotiated on the anniversary of 9/11 last year. In it, Riyadh and its monarchical Gulf neighbors pledged to “repudiat[e] the[] hateful ideology” of “ISIL and other violent extremists.”

Instead, it appears that Saudi Arabia’s government continues to embrace extremist clerics who promote intolerance toward other religions.

David Andrew Weinberg is a Senior Fellow at the Foundation for Defense of Democracies. He recently helped author a report for Human Rights First on Saudi human rights abuses, religious incitement by state-supported clerics, and options for U.S. policy.