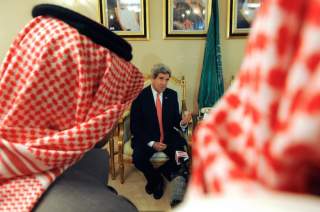 THE HOUSE of Saud may be attempting to modernize its economy, but the gulf between U.S. and Saudi values and national interests is deepening. The divide in values is stark, but it should not obscure the divide in interests—most notably, the role that the Saudi government has played in promoting those very interpretations of Islam that have wreaked havoc across the Middle East and world. A reassessment of the benefit and terms of this alliance is overdue. The Saudi government’s egregious human-rights record has been ignored by a long line of American administrations of both parties in favor of maintaining intelligence sharing, access to oil markets and the joint goal of countering Iranian regional ascendency. This willingness to ignore the actions of the Saudi government toward its own citizens in favor of preserving the status quo has shaped America’s diplomatic relationship. Nothing could be more mistaken.

The divides between America and Saudi Arabia could hardly be starker. For one thing, Saudi women lack nearly every freedom that Americans value. Women are legally dependent on men from birth to death, simply trading in their father for their husband as their guardian. According to Saudi law, every woman must have a male guardian, typically her most immediate male family member, who is responsible for making all legal or public decisions on her behalf, including the signing of any official documents, enrolling in university, seeking the benefit of government social-welfare programs or travelling internationally. Perhaps most humiliating, a woman’s own son can be her guardian if her father or husband is unable to serve in that role.

Although women were permitted for the first time to vote in municipal elections in 2015, their legal and societal status inhibits their ability to get to the polls. The ability to travel independently and register to vote without the presence of a guardian, familial and social pressures, and religious fatwas keep women at home every day, including election day. Furthermore, there are no elections for positions of national significance in Saudi Arabia; the municipal elections in which any Saudi citizen is allowed to participate are for local councils. While the lack of women’s suffrage has long served as an emblem for Western observers of the dearth of civil and political rights in Saudi Arabia, this policy change has falsely given U.S. and European audiences the impression that the daily lives of Saudi women are significantly improving.

Moreover, Saudi citizens who identify as anything other than Sunni risk grave discrimination at an institutional level. This goes beyond the mere establishment of a national religion, as practicing no religion, another religion, or another sect of the same religion is punishable by imprisonment or execution. In January 2016, a well-respected Shia cleric, Sheikh Nimr al-Nimr, was executed on charges of disloyalty to the ruling family and for instigating peaceful, public protests against the Saudi monarchy. His trial was far from fair, and lacked many of the rights cherished by Western norms of due process. During his arrest, he was shot by security forces multiple times and then detained for months without charges. Al-Nimr was denied access to medical care and the bullet that was lodged in his body during his arrest remained there for months. During the trial, the judge prevented him from adequately preparing for his defense, meeting with his lawyer or exercising his right to cross-examine witnesses. In 2012, as part of the Saudi protests during the Arab Spring, al-Nimr’s nephew, Ali al-Nimr, was also arrested and sentenced to death as a minor. Ali is currently in a Saudi prison, awaiting the same fate as his uncle. Both Ali and Nimr are just the most recent in a long list of Saudis who have been sentenced to death for attempting to create a society in which they are treated equally under the law.

Religious “crimes” join a frightening list of nonviolent offenses that are considered grounds for execution. Hundreds of Saudis are publicly executed each year, mostly for committing such crimes as adultery, sodomy, sorcery and drug use. In 2015, Saudi Arabia conducted at least 157 public executions, marking the regime’s deadliest year in two decades. The government is on track to break its record again, having sanctioned ninety-two executions by May. Even when the penalty is not death, political activists receive excessive sentences and medieval public lashings. The founders of the Saudi Civil and Political Rights Association, for example, were recently sentenced to at least ten years in prison for their attempts to advocate political and human rights. This repressive response keeps a stranglehold on any semblance of a Saudi civil society.

BASED SOLELY on respect for human rights, Saudi Arabia is an incompatible ally of the United States. But while human rights is an important lens through which to view any partnership, realpolitik has been the ostensible basis of the alliance. So how does it stand up under interest-based and strategic considerations? The authoritarian practices of the Saudi regime not only fail to come close to the international norms governing acceptable treatment of citizens, but they also have been unsuccessful in securing regional order. The Saudi government has failed to keep its allies in Egypt and Bahrain stable by enabling white-knuckled repression, take a leadership role in the Syrian Civil War and contribute to a sustainable Israeli-Palestinian peace process. Riyadh has succeeded, meanwhile, in wreaking havoc in Yemen.

The disparity in strategic priorities between Washington and Riyadh is most pronounced in the Saudi government’s mass export of extreme Islamic practices—which conclusively belies the premise that it is a consequential counterterrorism partner. The release of the heretofore classified twenty-eight pages of the 9/11 Commission Report sustain the conclusion that Saudi government or senior officials did not back the hijackers, and Saudi officials assert political and military opposition to terrorist groups like Al Qaeda and the Islamic State (ISIS). But the government has continued to internationally support the similarly extreme practices of Wahhabism through mosques, Islamic cultural centers and schools. Many of these religious and educational establishments have created opportunities for training terrorists around the world, and contribute to the radicalization of previously peaceful communities across the Middle East, Asia and Africa. It is estimated that the Saudis have allocated over $100 billion from their official budgets to these projects, and have tacitly permitted far more to be spent through private contributions and charitable organizations.

The proliferation of Wahhabism underpins the rise of Islamic fundamentalism from Bangladesh to Nigeria, from Kosovo to Pakistan. As a result, in Southeast Asian and West African villages where, just a decade ago, young people frequented clubs on weekends and lived largely secular lives, women now feel pressure to dress in burqas and men are expected to pray five times a day. The increasing prevalence of Wahhabi imams and madrasas worldwide manifest at a minimum in absolutist thinking in populations that completely reject religious tolerance or, in extreme circumstances, correlate with an increase in violence. As Vali Nasr, dean of the Johns Hopkins School of Advanced International Studies, noted:

The ideology that’s propagated by these schools is so significant in shaping minds in the Muslim world. If regular schooling is not schooling people, and schools that propagate fanaticism are schooling people, it doesn’t take a brain surgeon to figure out what would be the impact.

Although Riyadh has heavily invested in its counterterrorism and counter-money-laundering operations, extremist publications and educational materials continue to flow out of Saudi Arabia and into communities around the world. There has been little change in the decade since Freedom House’s 2006 Saudi Publications on Hate Ideology Invade American Mosques. The report analyzed hundreds of publications produced by official and private Saudi entities and concluded that “the Saudi government propaganda examined reflects a ‘totalitarian ideology that can incite violence.’”

Concerns over the connection between Wahhabism and violent extremism have been realized over the past few decades. In Bangladesh, for example, Wahhabi-trained citizens organized themselves into a fundamentalist group that was implicated in violent protests in 2014. According to a State Department cable released by WikiLeaks, Saudi-funded Pakistani madrasas pay families an average of $6,500 for allowing their sons to be trained for “martyrdom.” Both European Parliament and U.S. government reports have found Saudi Arabia directly responsible for financing terrorist attacks in multiple regions.

Freedom House has documented in annual surveys democratic backsliding around the world, particularly in freedom of expression, freedom of association and rule of law, with 105 countries exhibiting regression over the last decade. In many circumstances, these instances of regression are supported by Wahhabi organizations and charities. Yet, there is some good news. One key example is in Nigeria, where terrorism and corruption plagued an already economically vulnerable country under the rule of President Goodluck Jonathan. Wahhabi charities with Saudi ties recognized an opportunity to influence economically vulnerable, predominately Muslim Nigerians. Even though President Muhammadu Buhari has made anticorruption and antiterrorism key components of his platform in his first year in office, Islamic extremists continue to threaten the lives and livelihoods of communities in both the Middle Belt region and Northern Nigeria. On a continent that has seen a marked narrowing of U.S. government funding related to democracy and governance, Nigeria has remained a priority out of necessity.