Saudi Arabia Must Prepare for the Post-Petroleum Order 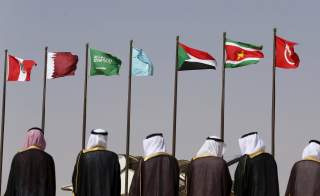 Precisely because women and human-rights activists in Saudi Arabia have highlighted its past proscription as a symbol, the royal decree granting Saudi women the right to drive is no small matter. And it surprisingly comes as the Saudi government has been enthusiastically embraced by a U.S. president who said—on Saudi territory—“We are not here to lecture” autocracies.

This step comes among a number of economic and social initiatives uncorked by the ambitious Crown Prince of the House of Saud, Mohammed bin Salman. However, it prompts several key questions.

How liberating is driving? Having myself helped choose Saudi blogger Hala al-Dosari as primary honoree at Freedom House’s seventy-fifth anniversary celebration in 2016—precisely because she was a female voice for freedom in the most repressive of U.S. ostensible allies—it seems to me one must ask what Saudi women really need and want most to thrive unfettered. While women now no longer need to rely on drivers (as it happens, putting part of the massive population of guest workers in Saudi Arabia out of work), there is a far larger barrier to their autonomy and ability to apply their gifts economically. The guardianship law, which requires male relatives to approve or accompany women in their activities, is what truly stands in the way.

What’s the larger picture of Mohammed bin Salman as a reformer? The prince is trying to prepare Saudi Arabia for a post-petroleum order, in theory by unlocking competitiveness and creativity. His plan is detailed in Vision 2030. It includes reducing the number of royal family members on the government payroll. It also increases domestic tourism—based on the premises that the under-thirty generation has fewer resources to travel abroad for entertainment and tourism, and a desire to keep Saudi money within the kingdom. The plan incentivizes young families to move to tourist areas like Jeddah to supply the necessary employment. With regard to women, Mohammed bin Salman has set a goal of increasing female participation in the workforce from 18 to 30 percent within fifteen years.

Despite this move toward gaining a competitive edge in the region, the rise of Mohammed bin Salman is coincident with a tightening of repression.

Before his rise, Saudi Arabia was one of the most acutely closed societies with institutionalized misogyny and muzzled free expression, and religious freedom denied to people who were not Muslims and Shia. Additionally, the country maintained profligate capital punishment, employing the most antiquated, sadistic of means. But an intensified crackdown emerged as the prince nudged aside his rival, Mohammed bin Nayef, to become next in line to replace a king forty-nine years his senior.

Saudi journalist Jamal Khashoggi recently admitted that he is staying in the United States for fear of returning home. He decried “the public shaming of intellectuals and religious leaders who dare to express opinion contrary to those of my country’s leadership” in the form of regime-televised raids of homes and arrests in early September.

Intensified brutality has not been limited to Saudi soil. As defense minister, Mohammed bin Salman was the architect of a more interventionist posture for Saudi Arabia—motivated far less by quashing terrorism than its regional and sectarian rivalries. In particular, he shaped a policy that flagrantly violated humanitarian norms against Yemen’s civilian population. Even the most jaundiced skeptic about the United Nations would regard Secretary-General Antonio Guterres as a highly credible voice on humanitarian situations given that he is the former high commissioner for refugees and former prime minister of Portugal. His special representative for children abused in wartime, Virginia Gamba, has documented hundreds of cases of Yemeni children killed and maimed by the Saudi’s indiscriminate use of force.

So it is high time for gender equality behind the wheel. Women deserve the right to steer themselves. Still, the jury is out on how far Mohammed bin Salman will go in steering reforms to liberate the innovation and productivity of younger Saudis. Repression of dissent and religious freedom are accelerating, not decelerating. Now, Saudi Arabia is exporting its lethal treatment of enemies of the state—to the civilians, indeed the children, of Yemen.

Perhaps the prince is purposefully driving us to distraction. Is distraction from its odious repression the reason for why the House of Saud’s has pledged of $100 million along with the UAE to the World Bank women’s entrepreneurship fund (which Ivanka Trump championed and helped unveil at the G-20 Summit in Hamburg in July)? Are we being distracted from witnessing whether more thoroughgoing freedoms are provided to women, believers of all sects and faiths, journalists, and regime critics?

To quote the favored quip of Francis Urquhart, protagonist of the original British version of House of Cards, “You might very well think that.”

Mark P. Lagon is distinguished senior scholar at the Walsh School of Foreign Service at Georgetown University, and chief policy officer at Friends of the Global Fight Against AIDS, Tuberculosis and Malaria.