Saudi Arabia Needs America Back in Its Corner 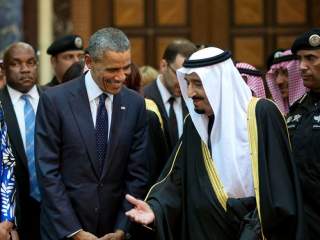 Saudi Arabia has just undertaken a large-scale reshuffle of its economic and social ministries as part of its “Saudi Vision 2030” plan to diversify the economy from its oil base. After over two decades of leading Saudi oil affairs, Ali al-Naimi has now been replaced by Khalid al-Falih, at the helm of a ministry that now includes industry as well as petroleum and mineral resources. Having risen to become an extremely capable CEO of Saudi Aramco before an interim assignment as health minister, Falih is a worthy successor to Naimi’s superlative leadership.

This cabinet reshuffle is part of a broader repositioning of Saudi Arabia under King Salman bin Abdulaziz and his son, Deputy Crown Prince Mohammed bin Salman, who has been entrusted with lead roles in both military and economic affairs. As defense minister, Prince Mohammed is responsible for the kingdom’s war against the Houthis in Yemen, whom the Saudi rulers see as proxies for Iran in the southern Arabian Peninsula.

Internationally, the contest with Iran and the divide between Sunnis and Shia overshadow Saudi policy. Domestically, job creation is the foremost imperative, with the challenge of unemployed or underemployed youth who are half of the kingdom’s population. For Saudi rulers, these are existential issues that command focused attention.

Of all foreign countries, the United States has been the kingdom’s closest and most important partner ever since its genesis as a modern state. Standard Oil of California was the first to discover and then to ship Saudi oil in the 1930s. King Saud and President Roosevelt sealed the oil for security pact at Great Bitter Lake in 1945. Since then, the United States has become the kingdom’s largest trade and investment partner, and hundreds of thousands of Saudis have been educated in American schools and universities. This represents a pool of shared experience that contrasts with the other, closed Wahhabi pillar of support for Saudi rule.

The Saudi-U.S. partnership faces unparalleled strains at present. If the Saudi-U.S. alliance in expelling Iraq from Kuwait was a high point, the invasion of Iraq was a low point that opened that country to Iranian dominance and the scourge of ISIS/Islamic State. The subsequent nuclear agreement with Iran only raised Saudi sensitivities further, which were then exacerbated by President Obama urging Saudi rulers to find ways to coexist with their Iranian archfoes in the same neighborhood.

At present, the United States can do very little to influence Saudi and Iranian views of each other. They have opposite sectarian alignments in Iraq. In Syria, Iran strongly supports the Assad regime, which the Saudis (and the United States) would like to see deposed. Islamic State is a common enemy, but direct Saudi-Iranian coordination is simply not in the cards.

On the other hand, the United States has an opportunity to reengage with the Saudis in a way that will benefit both sides. Already providing logistical and intelligence support in Yemen, the United States can reinforce efforts to achieve a political solution including power-sharing arrangements for that conflict.

In Syria, both countries along with their allies could press Russia—and in turn Assad—to expand cease-fires and establish safe zones for refugees, before pursuing a negotiated settlement.

Against ISIS in Syria and Iraq, Saudi Arabia and other Gulf Cooperation Council countries could increase financial as well as military assistance, reinforcing Arab support for a winning coalition.

Equally, the United States and Western countries should be supportive of the ambitious Saudi economic program. As the Saudis themselves recognize, the private sector role needs to be substantially increased. Over seventy thousand Saudi students are now enrolled in American universities. Western companies are working with Saudi partners to establish new polytechnical institutes—for example, in plastics and petroleum services—which can create thousands of blue-collar jobs.

Many more of these initiatives can be taken through public-private partnerships, with funding from Saudi Arabia and technology from the United States. The kingdom has embarked on an ambitious program to build a knowledge economy, with new economic cities and science and technology centers as building blocks. Not least, this represents a substantial commercial opportunity for the United States.

In all of this, one can expect Saudi Aramco and the new Ministry of Petroleum, Industry and Mineral Resources to play key roles. During Minister Naimi’s tenure, these entities were responsible for creating KAUST, the flagship King Abdulaziz University of Science and Technology near Jeddah. During Minister Falih’s tenure, many more such initiatives can be expected—potentially funded by a partial privatization of Aramco itself. From energy to industrial to postindustrial policies, a door is opening for robust dialogue and cooperation between our two countries.

Reengagement in the security and economic arenas will not only help put U.S.-Saudi relations back on track, but advance U.S. interests much more steadily in this crisis-ridden region.

Jan Kalicki is a Global Fellow at the Woodrow Wilson Center in Washington, DC, and Senior Fellow at the Watson Institute for International and Public Affairs, Brown University. He served as cochair of the U.S.-Gulf Cooperation Council Economic Dialogue from 1996 to 2000. The views expressed in this piece are solely those of the author.