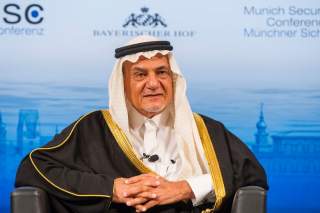 Saudi Arabia’s Prince Turki al-Faisal is used to being the point man in a difficult situation. In 1979, a group of radical extremists occupied the holy mosque in Mecca, Islam’s holiest site. Turki al-Faisal, then Saudi Arabia’s chief spy, was one of the first to arrive in the city. He was nearly shot when a bullet slammed into a door he was opening. In the 1980s, Turki al-Faisal led Saudi efforts in support of the Afghan mujahedeen in their war against the Soviet occupiers. As ambassador to the United States from 2005–07, Turki al-Faisal was the Saudi point man in Washington during a difficult period in American-Saudi relations. During this tenure he visited thirty-seven states advocating for a robust Saudi-American relationship.

Turki al-Faisal appears to be Riyadh’s point man once again. Last month, the former head of Saudi intelligence called for the overthrow of the Islamic Republic at a meeting of the Iranian opposition in Paris. His remarks coupled with recent diplomatic moves signal a new tougher policy toward Iran from Saudi Arabia. Though officially retired from government, no member of the royal family had ever so publicly embraced the Iranian opposition or called for regime change in Tehran.

A Sunni Arab kingdom and a Shia Iranian national liberation organization make unusual alliance partners. Though Saudi Arabia has supported some Shia groups in the Iraq, the evolving MEK-Saudi alliance prove again that realpolitik and geopolitical concerns trump sectarian differences across the Middle East. An estimated audience of one hundred thousand made the trek to a massive hallway (often used for the Paris Air show) to hear him and other speakers at an event. The annual rally is organized by the Iranian opposition group known as the People’s Mujahedeen or more commonly by the English initials: MEK. Turki al-Faisal’s remarks on July 9 were followed on July 30 by a meeting between the head of the MEK and the President of the Palestine Authority Mahmoud Abbas in Paris. Saudi is large funder of the Palestinian Authority and may have facilitated the meeting.

The seventy-one-year-old native of Mecca used his remarks to condemn Iran’s meddling role in the Middle East. The Saudi royal blamed Iran for much of the region’s troubles. He noted Iran had supported terrorist groups around the globe from religious extremists in the Sudan to the Japanese Red Army, a defunct terrorist group. The large crowd interjected during his speech to chant “The people demand the removal of the regime” a slogan once used by protesters during the Arab Spring on Cairo’s Tahrir Square. In the most dramatic and unscripted moment of the speech, Faisal acknowledged the crowd and repeated their wish to have the Iranian regime removed from power. His comments about Iran’s illustrious history during his thirty-minute speech left open the possibility that under a new government Iranian-Saudi relations could resume the more amicable relations of the pre-1979 era.

The conference's organizers could not have been more pleased. The People’s Mujhadeen of Iran or Mujahideen-e-Khalq (MEK) was founded in 1965 to oppose the Shah with an ideology that freely mixed socialism, Shia Islam and violence against the Shah’s government and its allies. The group was brushed aside by forces loyal to Grand Ayatollah Khomeini following the 1979 Iranian Revolution. Following this setback the MEK spent the better part of two decades waging a low-level insurgency against the Iranian government from abroad. By 1988 many of the group’s members had been forced to leave France for Saddam Hussein's Iraq. That same year Saddam Hussein supported an abortive MEK invasion of Iran that proved to be the last battle of the Iran–Iraq War. In 1997, the Clinton Administration labelled the MEK a terrorist organization in what was seen as a sop to Iran. In response the MEK renounced violence in 2001. In 2003, the group gave up its remaining arms during the U.S-led invasion of Iraq. During which a few thousand MEK supporters were eventually relocated by the United States to the awkwardly named Camp Liberty where they remain, hoping to be granted asylum elsewhere. In 2012 the United States reversed MEK’s status as a terrorist organization. Iran continues to consider the MEK to be a terrorist organization responsible for thousands of deaths. As such Turki Al-Faisal’s speech in Paris was met with rabid condemnation in Iran. One Iranian media outlet compared Turki Al-Faisal’s speech and Saudi support for the MEK to the earlier MEK–Saddam Hussein alliance.

On July 30, 2016, long-time Saudi ally Mahmoud Abbas met the president of the MEK, Maryam Rajavi. Both Abbas and Rajavi used the event to condemn extremism and fundamentalism in the Middle East. The meeting offered the MEK did its part to make the meeting appear like a meeting of heads of state right down to an all-smiles photo-op. Indeed, the MEK often refers to  Rajavi bizarrely as the “president-elect” of the Iranian Opposition.

Saudi Arabia is a longtime sponsor of the Palestinian Authority and may have facilitated the meeting which offered a chance to undermine Iranian influence in Palestine. Valiolla Nanvakenari, a member of the Iranian parliament’s foreign affairs committee, deplored the meeting “Backing the [MEK] terrorist group in any sort by any institution or country whatsoever runs counter to international norms and regulations and draws the Iranian people’s ire.” Hossein Sheikholeslam, an advisor to FM Mohammad Javad Zarif, went further calling Abbas a CIA agent and claiming, “Mahmoud Abbas has had secret ties with terrorist groups and Israelis, and now these relations are being disclosed” comments that resulted in an official rebuke from Fatah on their website.

The extent to which the MEK maintains intelligence operatives within Iran is unclear. Other than a string of mysterious fires at petrochemical facilities, there is little evidence of an ongoing sabotage campaign. What is clear is a new Saudi willingness to confront what its perceived Iranian threat more directly. The two regional powers support opposing factions across the Middle East from Lebanon to Bahrain. Earlier this year Saudi Arabia floated the idea of sending ground troops to Syria and currently is conducting military operations against Iranian supported militants in Yemen.

It also marks a personal redirection for Turki Al-Faisal, the Saudi point man. As ambassador to the United States a decade ago, he publicly advocated for U.S.-Iranian rapprochement, telling one American reporter “We talk to Iran all the time, why can't you?” As the region’s politics continue to change, Saudi Arabia is now talking to new friends.

Joseph Hammond is a freelance journalist who has reported from the Middle East, Africa, and Eurasia. He is a former Cairo correspondent for Radio Free Europe and a Fulbright fellow with the government of Malawi. He tweets at @TheJosephH.