Saudi Arabia's Crown Prince May Be Chasing an Economic Mirage 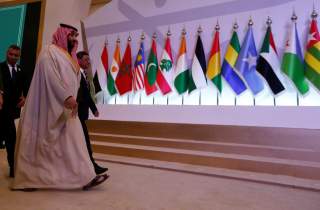 During Mohammad bin Salman’s (MbS) visit to Washington, much of the focus likely will be on the eye-catching themes of the conflict in Yemen, the regional rivalry with Iran, and Riyadh’s budding interest in nuclear power. But make no mistake, the Crown Prince’s less newsworthy (to American readers at least) brand of economic revolution, Vision 2030, is setting the stage for a generational change in Saudi society. Launched in 2016, MbS is intimately linked to the plan’s ambitious goals of liberalizing the Saudi economy by reducing its reliance on the oil industry and breathing life into an embryonic private sector with broad-based investment and employment.

Like all visions, Vision 2030 can be prescience or hallucination. The targets in Vision 2030 are ambitious beyond reason, and many of them should not be taken literally. Most of the plan’s targets—such as raising to 50 percent the share of non-oil exports as a percent of GDP (it is currently less than 20 percent) and increasing non-oil government revenue by a factor of five—are purposefully a stretch. They are meant to signal to society and to the markets that the leadership is serious about transforming the economy, but barring fanciful accounting, these and many other goals will not be realized in that timeframe.

Last year, more than 90 percent of Saudi Arabia’s exports to the United States were oil and products derived from oil. The International Monetary Fund’s export diversity index measures the extent to which a country’s exports are driven by only a few sectors or trading partners, and by this measure Saudi Arabia’s export diversity places it on par with some desperately underdeveloped countries.

It is doubtful that MbS could have pulled off such ambitious policy goals without the sustained drop in oil prices, which has made the decades-old and hackneyed calls for economic diversification a priority. The Kingdom has suffered through bouts of oil gluts before (the mid-1980s, the late 1990s), but absent during those years of want was a leader to force change.

Regimes in the region have consistently used worries of destabilizing reform as a dodge for delaying much-needed change, and GCC leaders in particular have argued (not without some cause) that reforming their economies amidst declining revenues would financially squeeze citizens already deprived of political and social freedoms. The advantage of Vision 2030 is that it is a long-telegraphed move, not some hastily drafted decree, and one in which the population can begin to internalize the need for the moves, rather than follow standard Pavlovian anger at cuts to benefits.

When the Saudi leadership looks around the kingdom and sees high rates of unemployment among the younger generation it must be a startling sight for the future of regime stability. Many factors drove the unrest during the Arab uprisings in 2010 and 2011, but youth unemployment and bleak prospects for jobs fueled extant resentment. The near-guarantee of government employment for the educated and connected is gone, so the Crown Prince and his policy enablers are banking on the private sector to generate jobs.

That is where their emphasis should be, but as Chatham House research rightly points out, “Even under a best-case scenario, it will be many years before the private sector is able to provide as many jobs as the public sector currently does.” The report goes on to highlight the perennial gap between what employers are looking for and the skills potential recruits can offer, a regional mismatch not unique to Saudi Arabia.

Most reasonable estimates put the youth unemployment rate around at least 30 percent, a feature of the regional labor market not unique to the Kingdom. Moreover, foreign nationals account for nearly 60 percent of the Saudi workforce, according to the General Authority for Statistics; to put this another way, if someone is working in the Kingdom, then the odds are high that the person is not a Saudi citizen.

Saudization—the policy of pushing companies to hire Saudi nationals instead of foreign-born laborers—has been around since the 1980s, but an absence of committed leadership at the top and real incentives have mostly led to half-hearted results. Reducing the number of foreign workers in the Kingdom to make way for Saudis will take years and require a wholesale rethinking of the national work ethic, but Saudis are finding themselves behind retail counters and taking jobs heretofore frowned upon. Luckily for the crown prince, this momentum had been set in motion with the cautious social reforms of King Abdallah, who died in 2015. Even his admirers could hardly have called Abdallah a trumpet of change, but he did push through adjustments to the social order that are now making other reforms possible, including a Royal Decree in 2011 that—shockingly—allowed women to replace men working in lingerie shops.

Supporters of Vision 2030 should begin preparing for disappointment; any plan this ambitious will fall short of its goal. It is one thing to promote openness and entrepreneurial vibrancy, but it is another to post growth and profits. The stock of foreign direct investment (FDI) in Saudi Arabia totaled $232 billion in 2016, according to UN statistics, and annually the Kingdom pulls in more FDI than nearly any other country in the Middle East, with American investors consistently topping the list. Investment is the sine qua non for meeting 2030’s diversification goals. However much trade deals are touted, it is FDI that will get the Kingdom closer to visions of diversification. Saudi Arabia is actively courting long-term investment to build factories to produce medical devices and pharmaceuticals and large-scale infrastructure spending on rail and renewable energy, sectors in which American companies can compete.

In a 2016 interview MbS said that Saudi Arabia would be able to live without oil by 2020. Saudi citizens can certainly “live” without oil, but the question of whether the state and economy can be weaned off these vast oil revenues by 2020 has no relation to reality. Regardless, the state of the macroeconomy and the global price of oil might be less interesting than the quieter shifts in the Kingdom’s cultural approach to work and the potential for bottom-up change.

Michael Gordon is an employee of the U.S. government, which is funding his fellowship at the Wilson Center. All statements of fact, opinion, or analysis in this work are those of the author and do not reflect an official position or views of the government or of the Wilson Center.