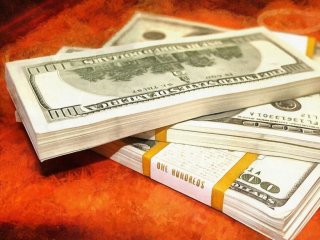 In recent years there has been much speculation over what would happen to U.S. financial markets and the economy if Chinese authorities suddenly decided to sell the approximately $1.3 trillion in U.S. Treasuries or government bonds they are estimated to own. In recent weeks, rumors have circulated that the Saudis were considering selling theirs—up to $750 billion of American dollar-denominated assets held by the kingdom.

But this rumor, like ones that preceded it regarding China, is much ado about nothing. It is, however, an excellent opportunity to explain what’s wrong with the logic of any foreign-policy “sell-off” strategy.

The collapse in energy prices has seriously bruised Saudi finances. With oil prices hovering around $40 per barrel, and the price needed to balance their budget stuck around $80 per barrel, the kingdom’s budget was almost $100 billion in the hole in 2015 and is expected to run a fiscal deficit of 19 percent of GDP this year.

Saudi Arabia’s 2014 current account surplus of 10 percent of GDP quickly transformed into a deficit of 8.2 percent of GDP last year. Absent a quick resuscitation of energy prices, Saudi authorities may have had no choice but to begin liquidating reserves to cover significant financial shortfalls. The kingdom recently raised $10 billion from a consortium of global banks, its first international debt issuance since the 1991 Gulf War.

As the third-largest holder of U.S. dollar reserves (although the exact composition of its holdings is not officially disclosed, unlike most other nations), Saudi Arabia is a significant owner of dollar-denominated assets. If, for whatever reason, they decided to “dump” these assets in large quantities over a relatively short period of time, the question is: Could this adversely affect the U.S. economy or global financial markets?

That would be highly unlikely, for several important reasons. First of all, selling hundreds of billions of dollars in American assets over a relatively short period of time might be technically difficult to execute (the “headline” $750 billion figure is a sizeable share of the $6.2 trillion of U.S. Treasuries held by foreigners, and even of the $12.6 trillion of U.S. government debt estimated to be held by the public). Assuming they could, it might result in a depreciation of the U.S. dollar, which would only result in capital losses for their remaining dollar reserves. With their sovereign credit rating having recently been downgraded, this scenario would hardly be appealing to the Saudi authorities.

Secondly, given that all dollar-denominated transactions eventually pass through the U.S. payments system, after selling their dollar assets, the Saudis would then quickly have to sell all or most of their dollar holdings. Moving into other currencies, however, involves another source of financial risk. The U.S. dollar is still easily considered the greatest safe haven in the world compared to alternatives, such as the euro, that currently look very unappealing.

Thirdly, the foreign exchange market is certainly deep and liquid enough to handle a significant surge in foreign exchange transactions, particularly U.S. dollars. Global foreign exchange-rate markets are now averaging $5 trillion in trading per day, 80 percent of it in dollars.

Fourthly, the figure of $750 billion being thrown around is an overstatement from several aspects. First, the kingdom’s sovereign wealth fund, known as SAMA, was valued at $750 billion in 2014, but has shrunk to $685 billion since then because of the necessity to liquidate assets for cash to maintain social spending. Moreover, not all of these holdings are in U.S.-denominated assets. SAMA has significant holdings in global equities and assets outside the United States, such as real estate and oil refining.

Lastly, in the unlikely event of significant market gyrations where U.S. Treasury prices were to tumble and domestic interest rates rise (Treasury prices and interest rates move in the opposite direction), the Federal Reserve could easily accommodate this movement by buying Treasuries through open-market operations, which it has done consistently through three phases of quantitative easing. With almost $5 trillion in Treasury holdings, this could easily be accomplished without upsetting global investors.

Bottom line? Dumping U.S. bonds is not really an option for any country holding major positions. To the extent that the number of bonds the United States sells is a problem—and it is a problem—it is not because it gives others leverage over America. It is because it is reflective of decades of out-of-control spending, which must be addressed for the sake of the country’s long-term economic health.

William Wilson, PhD, is a senior research fellow in the Davis Institute for National Security and Foreign Policy at the Heritage Foundation.