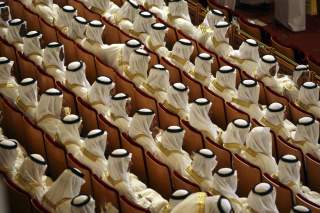 Image: Grooms take part in a mass wedding ceremony in Riyadh June 24, 2008. Governor of Riyadh Prince Salman and a local group organized a mass wedding for about 1600 couples to help young people who are unable to afford expensive ceremonies because of the rising cost of living. REUTERS/Ali Jarekji (SAUDI ARABIA)