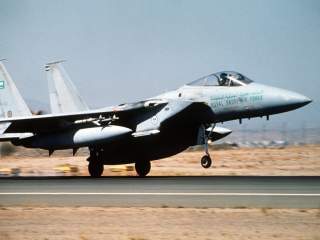 Last week, the spokesman for the Saudi military, General Ahmed Asseri, announced that Saudi Arabia is “is ready to participate in any ground operations that the coalition (against Islamic State) may agree to carry out in Syria” and that its decision to move into the war-torn country is “irreversible." However, given that the Saudis and their allies in the newly formed Islamic Coalition are conducting massive joint operational military exercises—codenamed Northern Thunder—in preparation for very possible military interventions in the near future, it’s clear that the Kingdom-led multinational coalition will not stop at ISIS. Rather, its ultimate objective in Syria is to take on Syrian President Bashar al-Assad and the Iran-created Shia militias, which are the source of as much, if not more, regional terror than ISIS and Al Qaeda. Should this Islamic coalition move into Syria and become the nucleus of a regional coordinated military approach toward ISIS, Assad and the Shia militias, the Obama administration will be called out on its narrow Syrian objectives and be forced to support the coalition or further degrade an already tenuous relationship with numerous core allies, foremost among them Saudi Arabia and Turkey.

The tactical blueprint for the coalition’s move into Syria while also remaining in Yemen is based on the Schlieffen Plan, Imperial Germany’s pre-World War I strategy for conducting war on two fronts. However, the Saudis have learned not to repeat the plan’s mistakes, in particular the misled assessments of the time about what it would take to defeat the enemy. In Yemen, the war is progressing soundly, with the Houthi rebels suffering major losses and the Saudi coalition armies within 20 miles of the capital of Sana. But Yemen will need to be tended to militarily for a long time to come if that country is to be fully secured, which is why the Kingdom is taking a long-term approach and is in the process of putting together the personnel, material and joint command structure to carry out simultaneous protracted battles against multiple enemies.

The joint training exercises being carried out by the Saudis and their allies involves as many as 150,000 deployed troops from 20 countries based at the sprawling Hafr Al Batin Military City in the north of the Kingdom on its border with Iraq. Most of the ground troops are from Saudi Arabia’s armed forces, with the majority having been deployed from the Royal Saudi Land Forces (RSLF) and Saudi Arabian National Guard (SANG). These troops are joined by specialized forces from the armies of Pakistan, Egypt, Malaysia, Morocco, UAE, Sudan and Jordan. In addition, troops from Senegal, Tunisia, Comoros, Djibouti, Mauritania, Mauritius, Maldives, Kuwait, Bahrain, Qatar, Chad and Oman committed personnel to the joint exercises. From the East, Indonesia, and Brunei (alongside Malaysia) have formed a joint coordinating committee with the Saudis. Finally, the Saudis and Turks recently set up a coordination committee for military affairs to plan future large-scale operations into Syria via the Turkish border, and in laying the groundwork for such an eventuality, the first batch of a squadron of Saudi F-15s will soon arrive at the Turkish Incerlik airbase.

This increasing emphasis on training for a ground invasion signals that the Saudis believe that air strikes alone will not defeat ISIS. Prince Mohammed bin Salman, the Saudi Defence Minister, made clear at the NATO Defence Ministers summit in Brussels last week that although the Kingdom fully supports the air campaign against ISIS as part of the U.S.-led coalition, it has deep reservations about its possible success. Moreover, contrary to what is being claimed by some Obama administration officials, the Royal Saudi Air Force (RSAF) has too rarely been called upon to join in the strikes. Since the U.S.-led coalition bombings began on September 23, 2014, RSAF has only flown 119 sorties (compared to RSAF's ability to fly over 100 sorties a day in Yemen), with the most recent request having been made on January 1, 2016. This reality has led the Saudis to believe that the air strikes are not being carried out to their fullest possible intensity and have thus been less effective than they should have been.

The Obama Administration’s Syrian policy is shameful and strategically a disaster. The Russian agenda of preventing the fall of Assad is now, in effect, America’s policy, primarily, it seems, because Obama in his last few months in office lacks the political courage to get involved while also hoping that perhaps Russia will deal with ISIS. But the Saudi-led coalition has the opposite view. Assad created ISIS, and as long as he is in power, the Middle East will continue to be drenched with terrorists. Thus, once the Saudis and their allies get going against ISIS and then move onto Assad and his Iran-supported Shia militias, the policy of the Obama Administration will be completely contravened.

Northern Thunder thus represents not only the emergence of a major military alliance in the Middle East, but also a major political quandary for Washington. As mentioned, the air strikes being carried out by the U.S.-led coalition have been ineffective in tackling the human catastrophe that has been unfolding for far too long in Syria. While the world might be fixated on ISIS, the Saudis and their allies know that much of the violence plaguing the Middle East is rooted in Assad and the Iranian-created Shia militias. If they decide to go after these terror nurseries, it will be time for the White House to finally decide exactly whose side it is on.

Nawaf Obaid is a visiting fellow at the Belfer Center at Harvard's Kennedy School of Government.