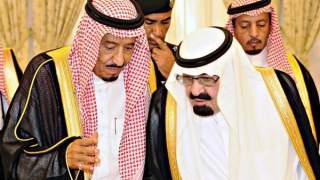 President Obama's decision to cut short an important visit to India so that he could go to Riyadh to pay his respects to the new king of Saudi Arabia, Salman bin Abdul Aziz, was an affirmation of the durability of the U.S. strategic partnership with the kingdom and of the two countries' need for each other.

After several rough patches and public disagreements over regional issues such as policy toward Egypt, Salman's predecessor, Abdullah, who died last week, managed to shore up his country's most important bilateral relationship; he departed this Earth with the kingdom and the United States cooperating closely on strategic and economic issues.

The effect of that outcome, however, is to lock both countries into a regional morass that both were partly responsible for creating.

The U.S. invasion of Iraq a decade ago is almost universally seen in the region as a disaster of which the fallout is still expanding. Aside from that blunder, the Saudis may bear as much responsibility as anyone for the violence and turmoil plaguing the region from Libya to Yemen. Abdullah may have been successful at home, keeping Saudi Arabia relatively peaceful and prosperous while its neighbors struggled, but in foreign policy the late king left mostly blots on his copybook. He leaves to Salman a legacy of failed initiatives and unsuccessful remedies; easier days are not in sight for the new monarch.

Abdullah's greatest failure can be found in Syria, where Bashar al-Assad is still president and the rebel groups backed by Saudi Arabia and the U.S. are losing ground to extremist forces such as Jabhat al-Nusra, branded a terrorist organization by Washington, and to the Islamic State, or ISIS. Abdullah's commitment to the ouster of Assad was both personal—he believed that Assad insulted him, and was an ingrate—and strategic; Syria's longstanding alliance with Iran made the Damascus regime unacceptable in Riyadh.

Abdullah felt an almost visceral devotion to the ideal of Arab unity, so that conflicts such as the one in Syria, pitting Arab against Arab, were painful to him. He gave the Syria portfolio to different individuals at different times, but none of them were able to engineer a resolution to the conflict that would protect Saudi interests while ending the bloodshed. Moreover, many regional analysts believe that Saudi Arabia's longstanding promotion of its own xenophobic, exclusionary form of Islam is at least partly to blame for the regional surge in extremism.

In fairness to Abdullah, a solution in Syria has eluded everyone as well, including President Obama. Abdullah agreed to let the United States use a Saudi base to train acceptable Syrian rebels, if there still are any such people, but at the time of his death he appeared to have run out of ideas.

Personal pique was also partly responsible for Abdullah's counterproductive ostracism of Iraq while Nouri al-Maliki was prime minister. Maliki is a Shiite, but worse than that, Abdullah believed Maliki lied to him shortly after taking office when he promised to run an inclusive government that would protect the rights of Sunni Muslims. As a result, for nearly eight years Abdullah refused to have anything to do with the government of an important neighboring Arab state that needed help. Only in the last few months of his life, when Maliki was out of office, did Abdullah agree to open a Saudi embassy in Baghdad. As a result, Saudi Arabia had virtually no political or economic influence in Iraq, creating a gap that Iran was happy to fill—thus reinforcing Abdullah's conviction that Maliki was a stooge of Tehran.

One result of Maliki's policies was the sudden rise of the Islamic State, which has not only seized vast swaths of Iraqi and Syrian territory but also poses a direct religious challenge to Saudi Arabia by declaring itself an Islamic “caliphate.” King Abdullah's government made it a crime for Saudis to fight in wars outside the country, and sent combat jets to participate in coalition air strikes against ISIS, but seemed incapable of mounting an effective response on its own to the ISIS threat.

In Yemen, Saudi Arabia's impoverished neighbor to the south, Abdullah was a key figure in the GCC engineered departure of longtime President Ali Abdullah Saleh, who was facing a nationwide rebellion during the Arab Spring. Yemen is now in free fall, a country with no government, after the resignation of Abd Rabbo Mansour Hadi, the president whom the GCC put into office with Saudi support.

Salman thus assumes the throne as a critical neighboring country is disintegrating and an Iran-backed Shia group known as the Houthis is in control of the capital. In the Yemeni hinterlands, al-Qaeda in the Arabian Peninsula, a sworn enemy of the al-Saud regime, is powerful and entrenched. Saudi Arabia's new defense minister, Salman's 34-year-old son Mohammad will have his hands full trying keep the chaos in Yemen from spilling across the border.

The Emir of neighboring Qatar, Shaikh Tamim bin Hamad al-Thani, was among the mourners at Abdullah's funeral, providing visual evidence that his country and Saudi Arabia have papered over their differences, which nearly broke up the Gulf Cooperation Council. So angry were Saudi Arabia, Bahrain, and the United Arab Emirates over Qatar's regional policies, including its refusal to break with the Muslim Brotherhood, that they pulled their ambassadors out of Doha for eight months last year. Now the GCC may again appear harmonious on the surface, but Abdullah's grand design to forge a political union of the six members probably died with him.

The Saudi King also died without seeing any positive result from perhaps his most surprising and courageous foreign policy initiative, the so-called Abdullah Plan for peace between the Arabs and Israel. After the disastrous 1967 Arab-Israeli Wars, the Arabs collectively committed themselves to a policy of no negotiations with Israel, no recognition of Israel, and no peace with Israel. In the first decade of this century, Abdullah shepherded them—in spite of all their divisions and differences—into an opposite position. All members of the 22-nation Arab League agreed to his plan to offer Israel full peace in exchange for an Israeli return to the de facto borders that existed before that war and some accommodation of Palestinian refugees.

That may have been an empty gesture for most of the Arab states, because they knew no Israeli government would accept a peace deal that required it to give up East Jerusalem. But Abdullah was not given to empty gestures. He would have accepted a peace agreement with Israel, had Secretary of State John F. Kerry or anyone else been able to achieve one. Abdullah died with this aspiration too unfulfilled.

Meanwhile, the Saudi troops Abdullah deployed to Bahrain to prop up a friendly Sunni royal regime against the Shia majority are still there almost four years later, and the country— which Saudi Arabia regards as a virtual protectorate—is still restive.

Perhaps the sternest test of statesmanship that Salman is likely to face in his first year in powers involves none of these intractable regional conflicts but rather the nuclear negotiations between Iran and P5+1 group of countries led by the United States. The Saudis see the Iranians as an implacable rival and as a regional troublemaker in places like Yemen, Iraq and Lebanon. Rightly or wrongly, Saudi leaders fear that a successful outcome of those negotiations would lead to a broader detente between Tehran and Washington – to the detriment of Saudi interests. On the other hand, failure of the negotiations could provoke a truculent response from Iran around the region, and reinforce hardliners in Tehran who are hostile to the Saudis and to the United States.

It will take more than a ceremonial visit from President Obama to provide Saudi Arabia with safe passage through all the minefields lying before King Salman.

Thomas W. Lippman is a Washington-based author and journalist who has specialized in Middle Eastern affairs and American foreign policy for more than three decades, and is an experienced analyst of Saudi Arabian affairs, U.S.- Saudi relations, and relations between the West and Islam. A former Middle East bureau chief of the Washington Post, he is currently an adjunct scholar at the Middle East Institute. His most recent book is: Saudi Arabia on the Edge: The Uncertain Future of an American Ally.