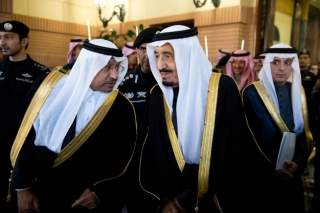 “You deserve more.” That’s what Saudi Arabia’s new King Salman tweeted to his people shortly after a flurry of royal decrees on Thursday reconfiguring the Saudi regime. And that’s exactly what he gave them, doubling down on such outdated pillars of his family’s rule as intolerant clerics, clannishly centralized power, politicized oil policy, and short-sighted handouts to paper over dissent.

By recommitting to these classic features of Saudi policy, King Salman is not providing much material to those who would like to portray him as a moderate and a reformer. Rather, he is reinvesting in the same unsustainable strategies that have set the kingdom up for greater instability down the road.

First, the king handed out prime promotions to some reactionary clergy, suggesting that he is unlikely to usher in a new era of much-needed Saudi religious tolerance.

King Salman’s pick for Minister of Islamic Affairs was Saleh bin Abdulaziz ash-Sheikh, who was dismissed from the same post in December after leading the ministry since 1996. Last April, ash-Sheikh proclaimed there is an “attack on Islam and Muslims from the dangerous triad of Jews and Christians and polytheists.”

He also made similar comments while presiding over a Quran recitation competition named for Salman. Afterwards, now-King Salman wrote ash-Sheikh a cable to reaffirm his sponsorship of the event and express thanks “for your good feelings.” Ash-Sheikh also spread misinformation about Shi’ite Muslims, a prominent Saudi minority, claiming that “Ali is their god” and their practices include “worshipping the dead instead of Allah.”

The king also selected a prominent preacher named Saad bin Nasser al-Shethri to advise his own court. This preacher used to serve as a member of Saudi Arabia’s highest religious panel, the Senior Ulema Council, until he was dismissed in 2009 after condemning coeducation at the King Abdullah University for Science and Technology and calling for a panel of religious leaders to oversee the university’s curriculum.

It takes an awful lot to be dismissed from this Council. Current members have argued that the Earth revolves around the sun and that media owners who broadcast depravity should be executed. Yet some observers have flagged Shethri’s dismissal as a memorable feature of King Abdullah’s legacy.

So what has al-Shethri done since 2009 to warrant King Salman’s endorsement? Well, for one thing, he condemned the so-called Islamic State. But the way in which he did so raised eyebrows, since he condemned the group by calling it “atheist” and “more infidel than Jews and Christians.”

Also still in power is the Kingdom’s Grand Mufti who called for all churches in the Arabian Peninsula to be demolished.

Salman did fire one member of the Senior Ulema Council, just not any of the top figures identified with its reactionary camp. Rather, he dismissed cleric Muhammad al-Eissa, who also ran the justice ministry and was known for being closely identified with King Abdullah’s court.

Meanwhile, Salman also fired the general president of the kingdom’s strident religious police, the truncheon-wielding Commission for Promotion of Virtue and Prevention of Vice. The Commission’s outgoing president was so hated by his hardline employees for reining in their worst excesses that reports suggest members have been driving around in celebratory motorcades, prostrating themselves in the street, and renting out a banquet hall to receive conservative well-wishers.

Instead, Salman’s new pick to head the morality police warns that the temptation to sin originates with Islam’s enemies abroad and so Saudi citizens should faithfully obey their ruler and follow his “correct curriculum.” He supervised an academic chair dedicated to the promotion of virtue and prevention of vice named after the religious police’s most hardline champion, the late Prince Nayef, and recently helped launch an academic chair for “moderation” named after the founder of Wahhabism.

He’s also praised Saudi Arabia’s new terror regulations as a model for the world, even though these draconian rules criminalize protests, advocating atheism, or anything that disrupts public unity as a potential act of terrorism.

Second, King Salman’s series of royal decrees on Thursday helped provide a roadmap for how power would be exercised under his new regime. It now seems unlikely that Saudi Arabia will be governed consensually by a team of rivals or prone to exceptional gridlock, as some analysts had suggested.

Instead, it appears power will be jealously centralized in the hands of a clique of immediate relatives close to the king, in what Gulf analyst Theodore Karasik calls the “revenge of the Sudairy,” named for the branch of the Al Saud family containing King Salman, his full brothers, and their descendants.

It also bears recalling that one of Saudi Arabia’s worst periods of internal instability was provoked in the late fifties and early sixties when two factions in the royal family battled it out in hopes of securing power for themselves.

As of Thursday, many key appointments by the late King Abdullah have been undone. His sons were removed as governors of Saudi Arabia’s two most important provinces: the political capital of Riyadh and the religious capital of Mecca. Crown Prince Muqrin, whom Abdullah forced Salman to accept as his future heir, was marginalized on Thursday by decrees that passed him over to give new authorities to his subordinates instead. And the notorious Prince Bandar, responsible for many of Saudi Arabia’s most memorable overseas adventures, has been fired from all of his positions, including as secretary general of the National Security Council.

Going even further, King Salman dissolved the NSC and eleven other top policy councils in order to centralize decision-making authority into two new entities: a Council of Political and Security Affairs and a Council of Economic and Development Affairs. Both were delivered into the control of Salman loyalists.

The new Saudi economic council was handed to the king’s son Mohammed, who also plays the role of gatekeeper as his father’s chief of staff and was appointed last Friday as the new Saudi defense minister. It is difficult to believe that Prince Mohammed bin Salman was given these positions by virtue of his long record in government given that the princeling is only 35-years old.

Meanwhile, Saudi Arabia’s new political and security chief is the king’s full nephew, Mohammad bin Nayef. MbN, as he is known in the West, has served as the kingdom’s interior minister since 2012, overseeing a systematic campaign against not just violent extremists but also non-violent human rights activists who want to move the kingdom in a more moderate direction. Shortly after coming to power, Salman also promoted MbN to second deputy prime minister so he can run cabinet meetings and be in line for eventual succession as deputy crown prince.

The king also promoted his son, Abdulaziz, from assistant minister of petroleum and mineral affairs to deputy minister, with the rank of cabinet minister. Combine that with the fact that the Supreme Council for Petroleum and Mineral Affairs had its functions folded into the economic council that now reports to the cabinet and king’s son Mohammed, these moves suggest a hollowing out of the authority of Saudi Petroleum Minister Ali al-Naimi. Even if King Salman continues Naimi’s controversial strategy of bankrupting high-cost oil producers abroad, it seems Abdulaziz has been anointed future energy chief of the world’s swing oil producer.

Finally, King Salman used some of his country’s savings from oil sales to bribe its citizens, hoping they will remain quiescent in the face of renewed authoritarianism.

Just as King Abdullah pledged massive new public expenditures to push back against the Arab Spring, Salman offered an estimated $30 billion in handouts to a wide range of Saudi social groups, including military officers, public employees, students, retirees, the poor, and disabled. He even authorized payouts to sports teams, book clubs, and professional societies, all of which are partially controlled by the state.

Thus, after Saudi Arabia plays out its gambit of collapsing oil prices, foreign consumers may face even higher gasoline prices than ever before. The Saudis will have to foot the bill for even greater expenditure outlays than ever before, pushing Riyadh’s breakeven price per barrel of oil that much higher.

On his way to Saudi Arabia on Tuesday, President Obama observed that the Saudis and similar regimes are “going to have to change how they do business” to survive in the modern age. Yet King Salman’s shortsighted Saudi reboot suggests he is not prepared to take the difficult steps required to put his kingdom on more sustainable footing.

But if you liked the old Saudi regime, then you are going to love the new one.

David Andrew Weinberg is a senior fellow at the Foundation for Defense of Democracies. He is also principal author of a forthcoming policy blueprint from Human Rights First that recommends a new approach for U.S.-Saudi relations.