The Saudi Monarchy May Have Killed a Free Man 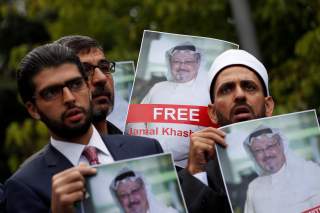 President Trump, who recently expressed his “love” for MbS, cynically sold U.S. policy to Riyadh. The president recently urged Riyadh to purchase even more weapons and push down oil prices, in recompense for America’s campaign against Tehran, the KSA’s only serious regional rival. In this way the administration sold its soul to the Saudi royals.

But now the crown prince looks like a common murderer. Khashoggi’s apparent killing should be a step too far even for Washington. If Iran committed such an act, then the administration would lead an angry global chorus against the Islamist regime. The United States should do the same against Riyadh.

Jamal Khashoggi was both good and brave, committed to a freer Saudi Arabia. That MbS and his confederates would kill such a man tells Americans all they need to know about their nominal ally. The Trump administration should loosen its embrace of a regime so antithetical to America’s most basic values and interests.