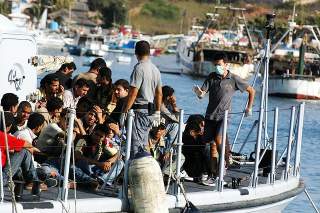 Images of the Mediterranean’s mass graveyard have horrified the world, which has done little to stop these atrocities from occurring. Just recently, about 1,200 people died on the treacherous journey across the sea. According to the International Organization for Migration, the Mediterranean death toll so far this year is thirty times higher than at this point in record-breaking 2014. The EU has responded by vowing to combat the criminal networks that bring migrants to its shores and tightening border controls. But treating migration as a criminal and security issue risks sacrificing migrants’ human rights on the altar of state sovereignty. Population displacement and human smuggling are international problems that reach far beyond Europe. These international problems demand an international solution.

Some commentators have called for Europe to simply liberalize its immigration policies to let more migrants enter. Such reforms are politically impractical. Right-wing parties control many European states and use anti-immigration rhetoric as a cornerstone of their platforms. The EU itself has repeatedly shown unwillingness to relax immigration controls. Back in 2001, because of increasing migration to Europe, the EU reformed its asylum system to harmonize state policies and tighten its borders. Ever since, the EU has erected what has been called “Fortress Europe” to keep migrants out. In 2004, the EU created the border-security agency Frontex, whose chief made headlines this week when he said that search-and-rescue efforts were not part of the agency’s priorities.

Migrants who survive their journey face new risks in Europe. The most common entry points for migrants, Italy and Greece, are overwhelmed by the responsibility of caring for the boatloads that reach their shores. Greece—which does not have much spare change for humanitarian assistance—has repeatedly been accused of inhumane treatment of migrants. Under EU policy, the member state where a migrant first applies for asylum is responsible for that asylum-seeker, even if he moves elsewhere. This allows wealthier Northern European countries to return asylum-seekers to the poorer Southern European states where they entered the EU, provided they will be treated humanely there. In cold detention centers where migrants await expulsion, this is not always the case.

International law provides scant recourse for those fleeing desperate circumstances. The main international treaty dealing with human trafficking, the UN Convention on Transnational Organized Crime, gives guidance on prosecuting traffickers, but pays little regard to their victims, simply mentioning that they be treated humanely. The 1951 Refugee Convention applies only to those with a well-founded fear of persecution based on race, religion, nationality, membership of a particular social group or political opinion. The Refugee Convention provides important protections for minorities and dissidents, but most migrants do not meet its stringent definition. The EU has directed its members to grant legal protection to nonrefugees who have a substantial reason to fear death, torture or other serious harm upon returning home. But not all member states have accepted the EU directive. More importantly, most people fleeing the generalized horror in Libya or Syria, for example, cannot prove specific fears of harm to themselves. So the vast majority of migrants smuggled to Europe—or to the United States, Australia or elsewhere—has no legal protection from being returned to suffering.

Protecting migrants’ human rights must be an international priority. Yes, population displacement threatens states’ sovereignty and security. And criminals who literally jump ship and leave their human cargo to die must be prosecuted. But international community must also protect displaced people from the horrors that caused them to leave. The EU is deliberating new solutions, but broader action is needed. The problem of human smuggling only continues to grow, and climate change and civil conflict will wreak more human costs. These issues do not just affect Europe, but the entire world.

We need new international law to protect displaced people. A Displaced Persons Convention would define a category of people to be granted temporary legal protection because their forced displacement threatens international peace and security. It would also provide procedures for cost-sharing and geographic distribution of those who qualify for permanent resettlement abroad. It could also include provisions for preventing population displacement, such as pre-committing states to creating safe zones for displaced people in the event of conflict or disaster, or to including provisions for safe return of displaced people in peace treaties they sign or help negotiate.

Every day, people risk their lives to flee horrific circumstances due to a misperception that they will be granted legal protection and a better life elsewhere. New international law can give both people and states clarity as to what their rights are. It would also help protect states straining under the burdens of hosting victims of disaster. International law might provide only a paper guarantee without enforcement by states. But it would be a start toward ensuring that states protect human rights as carefully as they guard their borders.

Jill Goldenziel is a Research Fellow in the International Security Program of the Belfer Center for Science and International Affairs at the Harvard Kennedy School and a Visiting Assistant Professor of Law at the Boston University School of Law. She is the author of the forthcoming book Displaced: Refugees, International Law, and U.S. Foreign Policy. Follow her on Twitter @JillGoldenziel.