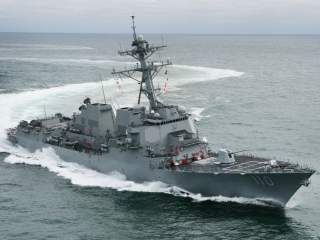 Greater operational transparency in the South China Sea has become a strategic imperative, and the United States needs to treat it as such by investing greater resources and political capital toward increasing the shared maritime awareness of Southeast Asian states. It simply will not happen without U.S. leadership.

The opaque, low-information nature of the South China Sea creates a permissive environment for many sources of conflict. When national governments lack real-time awareness of who is doing what and where in the maritime domain, opportunistic actors like China have the ability to exploit it—through contentious land reclamation, illegal fishing and the bullying of commercial ships from other nations. But even among states that aren’t tempted to exploit information asymmetries, a lack of situational awareness increases the prospect of misunderstandings, miscalculations and accidents among nations with overlapping Exclusive Economic Zones.

This problem isn’t entirely lost on the Pentagon. Last year, it released the Asia-Pacific Maritime Security Strategy, which outlined efforts to build the maritime surveillance capacity of Southeast Asian partners, and followed it up with the Maritime Security Initiative (MSI)—an authorization of more than $400 million to shore up security for nations surrounding the South China Sea. Maritime security is de rigueur in Washington.

Yet neither the announced Pentagon strategy nor MSI offers a roadmap for how the United States will go about making the South China Sea more transparent. There also seems to be little recognition that security cooperation in this vein is an immediate strategic issue every bit as crucial to U.S. interests as tracking Russian actions in Crimea or the atrocities within Syria; not all strategic imperatives are headline grabbers. Moreover, many of the timelines for realizing current U.S. maritime capacity-building efforts stretch more than a decade into the future, while the South China Sea’s opacity problem is incentivizing undesirable behavior today.

The time for transparency-inducing action is now, and it can’t be limited to U.S. arms transfers to allies or enhanced maritime patrols. These traditional moves are essential, of course, but they’re slow and expensive. That’s why in a new report with my colleagues from the Center for a New American Security (CNAS), we outline the strategic case for maritime transparency and a road map for making it happen. Part of the solution is indeed to fill what we describe as Southeast Asia’s “ISR gap”—remedying a shortfall in the intelligence, surveillance and reconnaissance (ISR) capabilities of Southeast Asian partners. But even faster, more innovative and more cost-effective solutions are within reach.

In parallel with long-term efforts to increase the independent ISR capacity of Southeast Asian partners, the United States needs to forge collaborative partnerships in three directions: with private Silicon Valley and defense technology firms; with external powers who have a shared stake in South China Sea stability; and with regional institutions in the maritime and information-sharing business.

The most promising and most immediate payoffs for South China Sea transparency are likely to be realized through partnerships with the private sector. A number of Silicon Valley start-ups and nonprofits are at the forefront of not only visualizing the locations of ships and aircrafts on maps in near-real time, but in value-added analysis of the publicly available data that it tracks. Companies like Spire and Skybox, and nonprofit projects like the Seas Around Us and Global Fishing Watch, are able to deduce secure maritime routes and identify patterns of illegal fishing. Companies and projects like these respond to the profit motive and to purpose-driven missions; the South China Sea offers both. Until now, though, the private sector’s capabilities have not been focused on the problems of the South China Sea; the U.S. government can help change that.

The U.S. defense industry also has a major role to play, by leasing its unmanned ISR capabilities to Southeast Asian states in need of greater maritime awareness—which is virtually all of them. Owning and operating ISR collection assets is expensive and requires significant operator training, whereas contractor-run maritime collection missions on behalf of a local partner deliver immediate payoffs. Even in cases where the United States is willing to transfer UAVs with ISR collection payloads to others, there will inevitably be a multi-year “coverage gap” between the sale of ISR assets and the recipient’s ability to actually operate and maintain what it procures on its own. The win-win solution is for the Pentagon to solicit defense industry plans for ISR fee-for-service programs for the Philippines, Indonesia and Vietnam, and use Maritime Security Initiative funding to subsidize leasing as necessary.

A Concert of External Stakeholders

At present, Australia, Japan, India and South Korea are all active in the Southeast Asian security environment, engaged in everything from arms sales to combined military training exercises and even nascent joint patrols. Yet the only coordination among them, or between them and the United States, occurs on an ad hoc and largely bilateral basis. These “Concert Nations” have the collective resources and local networks to make a real difference in the ISR and maritime law enforcement capacity of Southeast Asia’s smaller powers. But to do so, they’ll need to come together as a concert to deconflict overlapping initiatives, capitalize on their respective comparative advantages and jointly map out the region’s ISR requirements.

No matter how advanced any individual state’s ability to see what’s happening in the maritime domain, it will never be enough to independently and persistently see across the entirety of the South China Sea. Fortunately, the seeds for multilateral information sharing have already been planted, if in limited and highly fragmented ways. The Singapore-based Information Fusion Centre and the Malacca Straits Patrol Network are among the patchwork of maritime information-sharing regimes in the region. As the United States and the “Concert Nations” work to build national maritime operations centers in places like Indonesia and the Philippines, they should also offer incentives and impose security assistance contingencies to encourage wider multilateral dissemination of the vessel and aircraft tracking information that such national maritime networks collect.

South China Sea transparency is not a quixotic goal; it just requires a coordinated agenda, efficient use of existing resources (and authorizations), and follow-through. Above all, it requires U.S. leadership, in the sense of resourcing and legitimating multidirectional partnerships. The time has come to render the region’s most volatile waterway into an open, transparent and stable one. Alternatives to doing so are both too bleak and too risky to allow without first trying a more transparent route.

Dr. Van Jackson is an Associate Professor in the College of Security Studies at the Daniel K. Inouye Asia-Pacific Center for Security Studies, and an Adjunct Senior Fellow at CNAS. He is the lead author of the new CNAS report, Networked Transparency: Constructing a Common Operational Picture of the South China Sea. The views expressed are his own. Twitter: @WonkVJ.