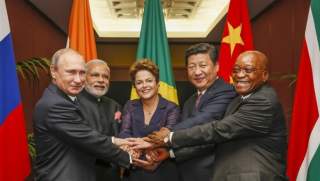 “Prices come down,” chanted rioters in Indonesia in May 1998. When the International Monetary Fund (IMF) stepped in to rescue Indonesia from near-bankruptcy, they demanded the following: privatization of state-owned enterprises, sharp cuts to government spending, and a tighter monetary policy. Unemployment worsened at the same time prices for essential goods such as fuel and food skyrocketed. Similar scenes could be found in Latin America, Africa and Eastern Europe as IMF remedies to the 1997 Asian financial crisis only deepened economic woes.

Over at the World Bank, the other pillar of Western-led global economic policy, conditions for development projects have historically included the implementation of strong legal institutions and respect for elections. The bank’s indicators for good governance are implicit development goals centering around promoting democracy, the rule of law, and Western-style government institutions.

For developing countries concerned more with economic growth--more than adhering to a free-market, neoliberal orthodoxy--a long-awaited alternative global economic and development architecture has arrived in the form of China-led initiatives such as the Asian Infrastructure Investment Bank, the BRICS Bank, and the New Silk Road. Instead of seeing threats to its preeminence, the United States should seize the opportunity to reassert its leadership by adapting to this new order.

Having languished in declinism since China’s emergence on the world stage in 2008, America needs to act now. Recently, the United Kingdom, France, Germany and Italy announced that they would join the AIIB, an effort to tackle Asia’s $1 trillion infrastructure needs. The United States sees the bank as China’s bid for control of Asia and had pressured allies, including Australia and South Korea, not to join.

At this point, joining is a symbolic gesture. The AIIB is beginning with only $50 billion in funding, and no governing framework is in place. Thirty-five countries have signed up, not for short-term investment prospects but as a bet that a China-led bank may do better than its Washington-based counterparts for Asia.

The basis of that bet is China’s own staggering growth. More importantly for countries receiving aid, Beijing has consistently pledged not to interfere in the domestic affairs of other countries, a direct rebuke to Western foreign policy. After taking some responsibility for globalization’s failures, the IMF and World Bank now allow developing countries a longer timeframe to implement reforms. However, it is never in doubt that the ultimate goal is a market economy with social values and institutions found in Western industrialized nations.

Add general frustration at their lack of decision-making power in the IMF and World Bank, and it’s easy to understand why developing countries are eager for another source of aid.

The United States was slow to respond to the AIIB expansion, embarrassed at its failure to contain China. Nathan Sheets, Treasury Under Secretary for International Affairs, finally stated last week that the United States would seek to collaborate on development projects with the AIIB. The IMF and World Bank expressed similar sentiments. In an effort to save face, they claimed their participation would ensure, “high-quality, time-tested standards are maintained,” according to Sheets. In other words, they will push for the AIIB to adopt their standards for governance, the environment, transparency, and the like.

If the promise sounds empty, it is. America is not going to write the rules of a Chinese development bank. The United States needs to do two things to maintain its leadership. First, it needs to realize that the countries of the emerging world order no longer believe development efforts must spread Western political and economic values. Second, it has to accordingly expand its understanding of global leadership. America is still critical in a world where its ideals are not a necessary precondition to economic growth.

The United States should now focus on fulfilling the original promise of the Bretton-Woods conference that established the IMF and World Bank. We should use these international financial institutions purely as tools for economic policy coordination. This is not to say that the original Bretton-Woods policy prescriptions, such as fixed exchange rates and an international reserve currency, should be followed. But what these policies got right was that we ought to focus on balancing the economic health of countries through facilitating international cooperation on monetary policy. Any sort of conditionality, particularly of a political nature, is unnecessary at best for global development and financial stability.

More fundamentally, the role of the IMF and World Bank must shift from dictating policy to building consensus. America needs to push through sweeping reforms, currently stalled in Congress, to increase funding at these organizations and give developing countries a greater voice.

America’s prime responsibility and contribution is no longer as the world’s chief idealist, but its most influential pragmatist. The United States must embrace its unique position to facilitate cooperation in a multipolar economic order.