Scarborough Shoal: A Chinese Noose around the Philippines' Neck 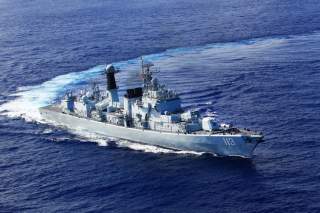 The past few weeks have seen a kind of whirlwind for the Rodrigo Duterte administration. “Rody,” as the Philippine president is affectionately called, made a historic trip to Beijing, where he met President Xi Jinping and returned with multiple billion dollars’ worth of Chinese investments. One of the things he promised to disaffected fishermen was to seek the restoration of their access to the Scarborough Shoal: the issue at the heart of a Chinese-Philippine conflict that has simmered for years—from April 2012, when the fishermen’s incident took place, to Manila’s filing of a legal suit against Beijing in the Permanent Court of Arbitration—characterized by recurring tensions in the waters around the disputed shoal.

Duterte returned from that trip with the official claim that he had asserted Philippine rights over the shoal, but he left it at that. “I leave it to the Chinese authorities what they will do in the next few days. We talked about it but I leave it to them,” he said. But true enough, how subsequent developments turned out seem to speak of the effectiveness of his talks with Xi. Reports started to emerge from local Philippine fishermen that they were able to fish around the shoal without harassment from the China Coast Guard (CCG) for the first time since April 2012. The loads of marine products harvested from the shoal, including more exotic species such as marlin and yellowfin tuna, arriving at Philippine piers aboard the boats, not to mention the jubilant smiles on the faces of the fishermen, are undeniable.

Adding to this euphoria have been reports of camaraderie between Philippine fishermen and CCG personnel, sharing foodstuffs and catches. Apparently, the Chinese are not such hard-headed, indifferent souls as to be oblivious to the plight of poor fishermen, merely trying to eke out a decent livelihood.

Diplomacy seems to have worked. But only partially.

Then came reports about the CCG still blocking access into the shoal, based on the Asia Maritime Transparency Initiative’s new satellite-imagery release. One local report even spoke of fishermen having “run the blockade” of the CCG. As Jay Batongbacal has pointed out, the imagery is “only a snapshot of a specific point in time.” The fishermen could have been waiting outside the shoal waiting for proper sea conditions to enter.

But one perhaps needs to put things in perspective. Some Philippine fishermen may simply want to take the risk to run headlong into the blockade, or exploit gaps in CCG coverage of the shoal. As Batongbacal has pointed out, “Philippine traditional wooden bancas that are smaller and lighter could conceivably enter the shoal at any point along the perimeter under the right tidal and sea conditions, as long as they can find an appropriate opening in the reef structure.” Local fishermen who are familiar with the tidal conditions and gaps in the shoal structure could possibly enter without being intercepted. The CCG might be still holding the shoal, but its personnel cannot be omnipresent all around the feature. The only way to keep out the fishermen would be to erect a barrier around the shoal.

Amid all these conflicting reports, one fact is unambiguous: the Chinese have maintained effective control over the shoal, a severe burden Manila has borne since Mischief Reef in the 1990s.

From April 2012 on, Beijing has tirelessly consolidated its physical control over Scarborough Shoal. Over the years since, the CCG has progressively built up its physical capacity to project force in order to exert Chinese sovereignty and rights in the South China Sea. It would have been inconceivable to do so in the 1990s, when the Philippine maritime forces could, notwithstanding their limited offshore capabilities allowing them only intermittent control at best, apprehend Chinese fishermen found operating in the shoal.

But times have changed. The CCG has returned to the spotlight since April 2012. The preceding Benigno Aquino administration and its policies, including the lawsuit, only hardened Beijing’s resolve. No longer would the CCG allow anyone else to conduct law enforcement around the shoal. And with more and more new offshore patrol vessels in various stages of construction and entering service—like “throwing dumplings into the pot” (下饺子), as the Chinese fondly and proudly proclaimed—the CCG has no qualms exerting undisputed control over the shoal.

When I was at a think-tank exchange in Beijing in July, just a few weeks before the arbitral award was released, a renowned Chinese scholar and policy advisor to Beijing remarked, with calm and composed resolve, “In the past, China used to be weak and therefore had been bullied. Now that China has become stronger, there is no more need to tolerate all these.” The CCG’s growing strength gives Beijing the newfound confidence to exert its rights. At the same time, it can keep the moral high ground.

The latter point is at least a narrative Beijing wishes to propagate. At another scholarly exchange in Beijing in September, some Chinese scholars, including a prominent researcher with the People’s Liberation Army Navy Research Institute, remarked that China has never used the navy to apprehend fishermen, as Manila did with a former U.S. Coast Guard cutter flying the Philippine Navy ensign during the April 2012 Scarborough Shoal incident. This is certainly untrue, of course; the Chinese navy has boarded fishing vessels from Russia, Taiwan and Vietnam in the past.

China’s conflictual behavior—maintaining a coast-guard presence around the shoal, first granting access to Philippine fishermen and later imposing difficulties of access—merely reflects Beijing’s continued wariness towards Duterte. If the seemingly mercurial Philippine president can turn against Manila’s long-term ally, Washington, he can also easily turn against Beijing when it is expedient for him to do so. Right after he made the Beijing trip, Duterte went to Tokyo, where he apparently struck a warm chord with Prime Minister Shinzo Abe, even agreeing to cooperate on South China Sea issues. This is hard for Beijing to ignore.

Therefore, the only way to keep the Philippine president in line, at least until he finishes his incumbency, is to show him Beijing remains the boss. Manila needs to remember, and Beijing must signal through its coast guard, that this respite can only amount to a “privilege,” not an “entitlement.” The initiative remains in Beijing’s hands. Good will can be given, as China demonstrated right at the start by not obstructing Philippine fishermen’s access to the shoal and, so far, not building an island on it. Yet the “privilege” can be taken away at any time, if Duterte crosses the line by doing things unpalatable to China’s policymaking elites.

Moreover, as Philippine national security adviser Hermogenes Esperon has admitted, even though Duterte and Xi discussed the shoal, they have not reached any agreement, and Beijing is merely respecting the traditional rights of Philippine fishermen.

Beijing has tied a noose around Manila, ready to be tightened when necessary. It is a noose Duterte seems happy to accept for now, since it at least guarantees Philippine fishermen conditional access to the shoal, which is something to show from his decision to conciliate with Beijing. This thus allows him to fulfill a promise to his constituents. He is a politician, after all; his political legitimacy is what matters.

International-relations scholars know that there is one, traditional type of diplomacy, such as the talks between the Chinese and Philippine heads of state, and another, coercive kind—what James Cable termed “gunboat diplomacy.” Both strands of diplomacy can coexist, and clearly they do in the case of Scarborough Shoal. Beijing wants to conduct traditional diplomacy—maintaining open communication with Manila—to exhibit substance to its rhetoric of “peaceful coexistence and development,” yet at the same time show that it remains in control over Scarborough Shoal.

It is now too late for the Philippines to overturn this fait accompli, much like the situation in which it found itself in 1998, when the Chinese started building structures on Mischief Reef. Since the 1990s, Manila has had sufficient justification to modernize and strengthen its maritime forces to ensure a repeat no longer happens. Alas, the opportunity was missed because of domestic political intrigue and distraction over internal security problems, among a myriad of obstacles—even as the country has enjoyed steady economic growth.

It was only after Scarborough Shoal was seized that Manila began to build its maritime forces in earnest. Notwithstanding a recent influx of new equipment, such as new coast-guard vessels from Japan, these measures, while applaudable, are too little too late. The Chinese noose is already around the Philippines, and it has become impossible to cut it loose without risking direct armed confrontation with Beijing. Without American help, this confrontation is bound to lead to Manila’s defeat. Clearly, Beijing does not dare risk a war either, and certainly wishes to preserve the upper hand by maintaining control over the shoal while keeping the moral high ground by not being the one to fire the first shot. Yet it knows that Manila has no stomach to initiate hostilities. So this fait accompli, a tenuous respite for Manila under Duterte, will hold.