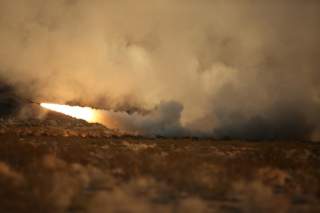 Nuclear disarmament is not necessarily a smart idea. The purpose of any arms-control arrangement should be to improve international security, not worsen it. If we are to be properly concerned about stability and security, then controlling the proliferation of the delivery systems of the warheads becomes just as important as controlling the proliferation of the warheads themselves.

Although recent growing tensions between the United States, Russia and China have squashed some of the life out of the Global Zero movement, it still soldiers on—like the black knight of Monty Python and the Holy Grail, who, in spite of repeated blows that sever successive limbs, declares, “It’s just a flesh wound.” But developments in 2014 have further highlighted the fact that it’s not just the proliferation of nuclear warheads that we should be worried about, but ballistic and cruise missiles as well. And this issue becomes even more important for the mission to lower nuclear numbers.

There are new debates over whether Tehran’s missile capabilities must be addressed in negotiations over its debated nuclear-weapons program. Senior Fellow of the Arms Control Association Greg Thielmann said in a recent op-ed that Iran’s missile capabilities should be kept out of current negotiations on its nuclear-enrichment program, arguing that it would likely hurt negotiations and constitute a humiliating surrender for Tehran of the country’s right to self-defense. Iran’s various activities, in turn, seem to have sparked interest by other regional powers in such capabilities. There are new concerns over Saudi Arabia’s thirty or so CSS-2 missiles (or Dong Feng 3). These have a 2500-kilometer radius (which covers the whole Middle East) and are currently capable of delivering a 2000-kilogram conventional warhead. In the Asia-Pacific, whilst China does not seem to have made substantial changes to its nuclear posture, its (debated) conventional buildup is certainly having repercussions, with Japan and Australia recently agreeing to cooperate on submarines and perhaps other types of military technology in the future.

All these developments illustrate the fact that it is not just nuclear weapons that are destabilizing; they are only one component of the overall military balance. This raises important questions about the real usefulness and effectiveness of the Nuclear Nonproliferation Treaty in international security, including what the relationship between nuclear and conventional arms control is: don’t we also need to think about conventional arms control?

The world is unlikely to be rid of nuclear weapons anytime soon, but if the nuclear disarmers are to be taken seriously, they must think through the desirability of a “second conventional age.” We tend to overlook the fact that the development of nuclear warheads coincided roughly with the development of short, medium, intermediate and eventually, intercontinental missiles. We need to think differently about the contribution of missile technology to the deterrence equation. In other words, what happens to strategy when you take away the warhead, but the missiles remain? In a recent article in the Journal of Strategic Studies, Robert Ayson and I argue that a world with missiles, but without nuclear weapons, could be one in which war becomes much more thinkable and, while less destructive, much more likely.

A world without nuclear weapons would graphically expose conventional imbalances, which in many instances have remained partially hidden in the current nuclear age. But it is upon these imbalances that any remaining system of deterrence would rely. There are problems here. Conventional weapons of the same weight (in hundreds of kilograms) fall demonstrably short in terms of crude high explosive capacity. Relying on these less-damaging conventional systems may raise the likelihood of war by making deterrence less feasible. With that in mind, Conventional Prompt Global Strike as an attempt at conventional deterrence doesn’t look so good anymore. In deciding whether or not to use force, it might be more tempting for a state to risk the relatively high probability of relatively small effects (from conventionally armed missiles), rather than risk the moderately low probability of much greater damage (from nuclear ones).

Neither do conventional weapons carry the same taboo against their use, or threatened use, that is often claimed for nuclear weapons. Not a single nuclear warhead has been delivered by any delivery system to an enemy target since 1945. By contrast, in a thirty-year period that ended a decade ago, ballistic missiles were employed in at least six different conflicts. In addition, the detonation of 100 kilograms of high explosives is something that even small countries might not consider unbearable. In 1991, Steven Fetter suggested that “conventionally armed missiles [could not] be decisive militarily...a truly strategic threat would require a capability to launch tens of thousands of [these] missiles.”

The idea that it might be easy to control a conventional missile war in a post-nuclear environment could also, ironically, be a problem. One can reasonably argue that a conventional missile war would be thought to be much more controllable than a nuclear missile war. This, coupled with the absence of the threat of massive nuclear destruction in the escalation ladder, could make conventional war a not-so-unlikely prospect. And after nuclear weapons, would the proliferation of ballistic and cruise missiles suddenly become more “acceptable”? Could we see a nonnuclear arms race try to fill a nuclear-shaped gap? Would we fear that race less, because advanced conventional missile systems are less destructive, when we should fear it more, because of the lower threshold to the use of armed force that they might involve? In an age without nuclear weapons, it is also conceivable that deterrence relationships will simply not work without boosting some aspects of conventional arsenals. Kenneth Waltz and Scott Sagan’s “more may be better” logic, which echoes Thomas Schelling’s controversial approach to nuclear weapons, may also be applied in an entirely conventional era. Although, here we get a variation of the famous Waltz-Sagan debate: is having fewer nuclear weapons better because there are more conventional forces?

These are the issues we need to think about much more seriously on the so-called road to Zero, and Iranian, Saudi Arabian, and Chinese behaviors highlight this. Could, for example, the current Missile Technology Control Regime be tacked onto the NPT? Herman Kahn once argued that “The objective of nuclear weapons policy should not be solely to decrease the number of nuclear weapons in the world, but to make the world safer—which is not necessarily the same thing.”

Christine M. Leah is a Stanton Postdoctoral Fellow at MIT.