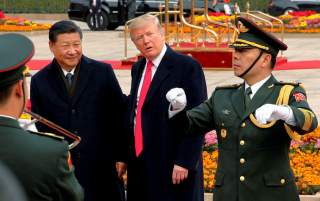 As President Donald Trump began his twelve-day visit to Asia, it was clear that this would be a major event in his presidency. This trip, the first by President Trump to the region since taking office, would be the longest trip any American president had made to Asia since George H. W. Bush’s administration. It would include visits to key allies: Japan, South Korea, and the Philippines, as well as Vietnam, a major player in the ongoing South China Sea disputes. It would also mark President Trump’s first state visit to the People’s Republic of China (PRC).

The itinerary included not only opportunities for bilateral exchanges, but also a host of major regional events, including the Asia Pacific Economic Cooperation (APEC) summit, the ASEAN summit and the East Asia Summit (EAS). The president’s focus on American economic concerns has aroused regional fears—will the United States continue to support the trade arrangements that have sustained the economic growth that has brought unprecedented prosperity to over a quarter of the world’s population?

Uncertainty from Washington, Volatility in Asia

There is also a large amount of uncertainty that have been generated by some of the president’s tweets and comments. Many wonder:

- To what extent is the United States still committed politically to the region? Candidate Trump’s comments about allowing South Korea and Japan to develop nuclear capabilities were interpreted by many as potentially signaling an imminent American withdrawal from the region.

- To what extent is the United States still committed economically to the region? Trump’s rhetoric regarding an “America First” economic policy seems to have found a very narrow application in his decision to withdraw the United States from the Trans-Pacific Partnership (TPP) negotiations. Moreover, the administration’s focus on trade deficits suggests a much more zero-sum view of trade in general.

The political and economic uncertainties have been matched by the volatility of the regional security situation. In particular, the unpredictability of future American actions has added to concerns stoked by Pyongyang and Beijing’s actions.

North Korea, of course, has been grabbing headlines with its various nuclear and ballistic missile tests. Its nuclear program has clearly accelerated under Kim Jong-un. Since he assumed the reins of power in December 2011, Kim has conducted four of its six nuclear tests, including at least two believed to be of thermonuclear weapons (i.e., hydrogen bombs).

That several of the missiles overflew Japan underscored the growing reach and threat posed by North Korea’s weapons. Pyongyang is at least implicitly signaling that it can fire nuclear warheads at a range of targets, from South Korea to Japan to Guam, Hawaii and the continental United States.

China, too, has been increasingly assertive. It has pressed its territorial claims in both the South China Sea and East China Sea. Despite Xi Jinping’s 2015 commitment to Barack Obama not to militarize the South China Sea, Beijing has reportedly deployed military forces to the artificial islands it has constructed in the Spratlys. Advanced Chinese fighters have also deployed to the Paracels, in easy range of the Spratlys.

Meanwhile, Chinese fishing boats and coast guard vessels have been steadily approaching the disputed Senkaku islands in the East China Sea. In August 2016, a Chinese fishing flotilla numbering some 200–300 boats, escorted by over a dozen China Coast Guard (CCG) ships entered the waters around the islands. This May, a Chinese unmanned aerial vehicle approached the Senkakus, along with four CCG vessels. The Japanese government has expressed concern that these intrusions now represent a new “normal” for the Chinese.

The expanding use of the CCG occurs as other Chinese armed forces modernize and improve their capabilities. Chinese fighters and bombers have increased their approaches to Japan, leading to a record number of “scrambles” by the Japan Air Self Defense Force. The People’s Liberation Army Navy is fielding more and more modern combatants, soon to be joined by China’s first domestically produced aircraft carrier.

The Chinese have also sought to dominate the region politically. Beijing has exerted economic as well as political pressure on South Korea to get Seoul to cancel deployment of the American Terminal High Altitude Air Defense (THAAD) system. The Chinese leadership has made clear to Seoul that it expects them to subordinate South Korea’s security concerns to Beijing’s. Indeed, Beijing has arguably employed more pressure tactics against South Korea over THAAD than it has against North Korea over the latter’s nuclear and missile programs.

While still too early to be sure, Trump’s official speeches and interactions have emphasized several key messages. On the political and security side, the theme has been ongoing engagement. In Tokyo, Seoul, Da Nang, and Manila, President Trump reiterated that the network of American alliances remains in place, and that he is not stepping away from them.

In Tokyo, he stated that “Our nations share an enduring bond. America and Japan face many challenges, many opportunities. There are many things we face, but we will be facing them together, in friendship and as allies.” Before the South Korean National Assembly, he declared: “We will not permit America or our allies to be blackmailed or attacked.” And at the ASEAN summit, he reiterated that “The United States remains committed to ASEAN's central role as a regional forum for total cooperation. This diplomatic partnership advances the security and prosperity of the American people and the people of all Indo-Pacific nations.”

Even before the summit, the Trump administration took actions that support the message of continuing political and military presence. The U.S. Navy, for example, has conducted at least four Freedom of Navigation Operations (FONOPs) in the South China Sea since President Trump took office. These were clear FONOPs, rather than the more limited “innocent passage” activities authorized by the previous administration. Indeed, the United States has undertaken as many FONOPs in the past ten months since Trump took office as it had in the entire second Obama term.

At the same time, a general skepticism for free trade permeates the Trump perspective, and this was also on display for much of the trip.

In Japan, for example, President Trump noted that “We want fair and open trade, but right now our trade with Japan is not fair and it’s not open—but I know it will be, soon.” Similarly, in South Korea, he questioned the fairness of the U.S.-South Korea free trade agreement (commonly referred to as KORUS).

In his APEC speech, he specifically emphasized that he would be open to pursuing bilateral trade agreements, while reiterating his skepticism towards multilateral agreements. His comments about what an “America First” economic and trade policy would entail leave room for questioning exactly what such agreements might look like.

Impact of the Trip

The trip will provide fodder for all perspectives on the Trump administration. Thus far, much of the discussion has turned on relatively minor details, from how he fed koi in Japan to his decision to skip the East Asia Summit plenary. But this may be because, at this point, it appears that little new ground was broken. No major agreements were signed; no major changes in relationships were signaled.

In some ways, this should be reassuring. For all the president has said about Asia over the last several months, few actual changes appear forthcoming. On the economic front, the president made clear that there would be new, albeit tougher, negotiations, rather than open abrogation of existing trade agreements. Whether any of our friends in the region will sign up to such negotiations, colored as they are by contention over NAFTA and KORUS, remains to be seen.

What is most unclear is whether anything substantial arose in President Trump’s conversations with Xi Jinping and Vladimir Putin. The Chinese had talked about “deliverables” emerging from the president’s first state visit to China. If no actual agreements were reached, then Beijing is likely to be disappointed.

On the other hand, they had described the visit as a “state visit plus,” involving “arrangements that could show the personal relationship between the two presidents and the places will be typical areas that can help the U.S. president have a better understanding of Chinese history and culture.” If the intent was to flatter President Trump, expose him to more than the usual state dinners and formal meetings, and help forge a relationship between Xi and Trump, the Chinese may have succeeded.

Nonetheless, despite the reporting on Trump’s sarcastic comment about not blaming China, it was clear that the president is not especially well-disposed towards Beijing. In his remarks in both Beijing and Da Nang, Trump made clear that various Chinese behavior, from lack of respect for intellectual property to limiting access to foreign competitors, violated his sense of “fair trade.”