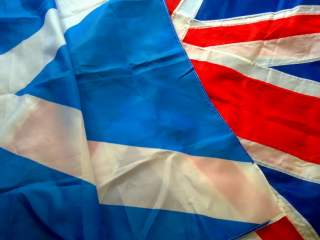 It was a simple question with two simple answers: Should Scotland be an independent country? The answer was either “yes” or “no.” But behind both of these answers lay an extraordinarily complex future for the United Kingdom. But strangely, that future, however complex, may have been very similar no matter what answer was given by the majority of the votes.

In the end, the answer was “no.” With 55 percent of the final vote on the night, the “No” camp came out with a much higher majority than the polls had expected. This presented an unexpected blow to the Scottish independence movement and has probably removed the issue from the political landscape in Britain for decades to come. It also claimed the scalp of the Scottish First Minister, Alex Salmond, who resigned shortly after defeat.

What is more certain is that the UK government knows it has to look at radical constitutional reform. It has to implement the “devo max” option. This is the option for more extensive devolved powers for the Scottish government, and it was put on the table by the “No” campaign in the last weeks before the referendum in order to shore up what appeared to be a wavering “No” vote. The fact is, however, that the devo max option has always been on the table—it was just that the “No” campaign decided not to play that card until very late in the day.

Originally it was the Scottish government that wanted a three-question ballot paper—“Yes” or “No” or devo max. It was the UK government that wanted the two-question Yes/No ballot and the Scottish nationalists came around to its way of thinking. This started to look like a gamble that had backfired in the last weeks of the campaign, but in the end the Westminster parties got the result they all wanted.

But although devo max was never offered to the voters, that seems to be the road the UK will now take, and the end result is likely to be a Scotland with far greater powers over its own affairs, a federated state with the rest of the UK—maybe a better way to describe it would be independence-lite.

A Climate of Uncertainty

The implications for the rest of the UK are enormous, should Northern Ireland and Wales gain a similar status, and England’s regions joining in too in a coherent federal state with a UK government in Westminster and powerful regional governments in Edinburgh, Belfast, Scotland and in the English regions. But given the muddled nature of British constitutional politics, the most likely result would have been a powerful Scotland, federated with the rest of the UK, and much weaker governments in Wales and Northern Ireland and nothing for England. However, late in the campaign, the “No” camp began to raise such slogans as “English votes for English laws” and the idea of enhanced national and regional power transfers was touted.

The Westminster parties have agreed upon a schedule for reform in relation to Scotland—agreement on the package for devo max by November 30, a fully published outline by January ready for the British General Election next May. But we now know that all three parties have profound disagreements about what the reform should look like. The Liberal Democrats want to see a modern federal constitution for Scotland, Wales and Ireland, and some form of devolved powers for England focused in regions and cities. Prime Minister David Cameron’s Conservative Party has hitched Scottish reform with the West Lothian question, such that Scottish MPs at Westminster will lose any say over England-only matters. The Labour Party—currently in opposition but polling ahead for 2015—want the Scottish reforms to go ahead with a delay on the wider constitutional question for the UK.

What this now looks like is a dirty inter-party battle seeking to protect vested political interests, rather than a rational process of reform, as Scotland, and perhaps the rest of the UK, looks on with eyebrows raised. This is especially evident for Labour, who draw a much larger quota of their Members of Parliament from Scotland than the other two parties. Labour also draws heavily on its Welsh MPs. Should they lose those votes in Westminster during “English-only” votes, they may find themselves permanently unable to govern in certain situations, even if they win a General Election.

It is interesting to think what might have happened to the UK if the “Yes” campaign had won a narrow victory. The fact is this would not have triggered a smooth, well-worked-out transition to independence. We would have entered the political unknown; it is not even clear who would have taken part in the negotiations. Although the leaders of both campaigns drew their lines in the sand—over currency, EU membership and nuclear weapons, for example—this was always hot air. Everything would have been up for negotiation and nobody was in a position to state categorically what the outcome of those negotiations would have been, except the end result of Scottish independence.

Even Alex Salmond’s date for independence, March 2016, was his own aspiration, not an agreed cut-off date for negotiations. Why March 2016? On the one hand, eighteen months may have seemed a reasonable time scale for independence. But on the other hand, and perhaps more significantly, elections to the Scottish parliament are due in May 2016. With UK elections in May 2015, if negotiations had not been completed as quickly as Salmond wanted there was no guarantee that either party that started those negotiations would be in power to conclude them. This is something that typifies British politics, and especially British constitutional matters, in general.

What if those new negotiators were opposed to independence, and negotiated a different outcome—probably something like devo max? They could put that to another referendum to finally settle the question, and given the popularity of the devo max option in the polls, it may well have come through. Anthony Hilton, writing in The Independent on polling day, argued that this was still a possibility even without changes in government. The most likely outcome would be two options, full independence or devo max, and the UK government would have had the power to call a second referendum to settle the question, again with devo max being the most likely winner.

And so we could have arrived at much the same place whatever the outcome, with a highly devolved Scotland enjoying independence-lite, and the rest of the UK making do with something more or less like what it has now. Or, more optimistically, a coherent federal UK with a modern constitution.

The entire independence debate also raised issues about defense and security. The UK is a major force in NATO, and in the operations in the Middle East that began in 2001 and continue today with the war on the Islamic State. With the “Yes” camp professing a non-nuclear, and generally revisionist, stance on defense—the vitality and endurance of one of the world’s premier military powers was called into question. With Wales and Northern Ireland significantly poorer than England, and sharing a tendency for higher social spending in their regional politics, we may be looking at a steep reduction in the military budget of the UK in the years to come as newly devolved powers allow the regions to shape their own taxation and spending.

So, although the “No” camp triumphed, the debate on defense has not yet even really begun. This also goes beyond the issue of mere military spending, but to constitutional arrangements. If England, Wales and Northern Ireland receive a significant increase in devolved powers, then Westminster may no longer hold sway over much in British politics beyond national security and high economics. The British Cabinet as we know it may come to resemble something akin to a National Security Council.

One would presume that if Scotland had left the UK, it would have submitted an application to join the European Union—if at the very least to secure a currency to replace the pound. While such a process is now out of the question, there is a certain irony in play for the Scottish people. If Scotland had successfully seceded, then the Scottish would have their EU membership in their own hands. With the victory of the “No” campaign, Scotland’s EU-future now lies in the hands of a British “In/Out” referendum on EU membership that is likely to follow the 2015 general election.

All this is guesswork of course, and the old cliché applies here, that the only certainty is that we do not know what the future holds for the UK, except that there will be radical changes in its relationship with Scotland, with unknown consequences for the country’s future. There may also be significant changes in how the UK acts internationally as the coherency of the Union is tested in both home and foreign affairs in the years ahead.

Phillip Cole is Programme Leader for Politics and International Relations at the University of the West of England, Bristol. He is co-author of Debating the Ethics of Immigration: Is There a Right to Exclude? (OUP, 2011)