Scott Walker: 'Our allies do not trust us, and our enemies do not fear us' 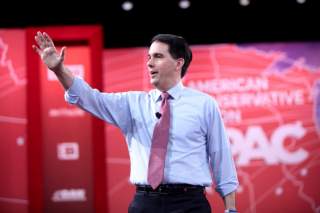 Keck: First things first, what is your reaction to the recently announced Iran nuclear deal? Do you really intend to terminate it on your first day in office?

Walker: The Iran deal is a terrible agreement that will be remembered as one of the biggest diplomatic disasters in U.S. history. It is a threat to our safety and the safety of our closest allies, especially Israel. It gives an American stamp of approval to the Iranian nuclear program, undermines the principle of nonproliferation across the globe, lifts the conventional arms and ballistic missile embargoes on Iran, and provides a signing bonus of around $150 billion to the world’s leading state sponsor of terrorism. Seeing this bad deal and President Obama’s lack of resolve, our allies are now taking matters into their own hands. That’s why I’ve said this deal is the starting pistol in a Middle Eastern nuclear arms race and will actually make war with Iran more likely, not less.

Iran’s Supreme Leader should know that a future American president will not be bound by this dangerous agreement. As president, I will terminate the deal on day one by immediately re-imposing sanctions against Iran, working with Congress to impose new crippling sanctions, and convincing our allies to do the same. This will not be an easy task, but given how bad this deal is, we cannot delay. When America truly leads and works with our allies, we can negotiate with Iran from a position of strength, prevent the regime from acquiring a nuclear weapon, and roll back Tehran’s influence across the Middle East.

Keck: It is often said that senators who run for president have, at least at first, a better handle on foreign affairs than gubernatorial candidates. Are there any traits that you, as a governor, have that candidates with legislative backgrounds lack, that would serve you well on foreign affairs?

Walker: I believe that, in my lifetime, the greatest president on issues of national security and foreign policy was Ronald Reagan—a governor from California. Americans want a leader who will fight and win for them. Governors must actually govern and follow through on their platforms and campaign promises. In Wisconsin, I managed to take power out of the hands of big government special interests and put it into the hands of hardworking taxpayers. I have proven that I don’t just talk about solving complex problems, I actually solve them. When it comes to assuming the role of commander-in-chief, there is simply no substitute for this kind of executive experience. A senator may have studied the nuances of a policy problem, but that alone does not differentiate him or her from a professor. Being commander-in-chief means building a strong team, making tough decisions, and taking responsibility for the results. I won three elections in four years in Wisconsin, a blue state, without compromising my principles. I did it by leading.

Keck: You’ve cited Ronald Reagan as your political role model, including in his handling of foreign affairs. What other presidents do you admire for their foreign policies, and why?

Walker: I admire Harry Truman for his handling of American foreign policy in a time of global crisis. President Truman was tough, practical, and decisive. He recognized the threat from the Soviet Union at the end of World War II, and he formed a successful strategy to meet that threat. He recognized Israel, supporting the creation of the new Jewish state despite the strong opposition of the State Department. He worked with both parties in Congress to create ground-breaking initiatives like the Marshall Plan and the Truman Doctrine. He built new American alliances, including NATO, that have stood the test of time. He did all this as a Midwesterner who was not born into privilege. His strong leadership and solid instincts were summed up in the slogan, “the buck stops here.” Internationally, he understood the difference between allies and adversaries and he promoted American values and democracy. He recognized that the president must lead and make difficult decisions – that’s what it means to be commander-in-chief.

Keck: Although issues like the Islamic State and Ukraine dominate headlines, many see China as a greater long-term threat to the United States. How should the United States handle its delicate relationship with China? Is it time to get tougher with Beijing?

Walker: The communist regime in Beijing has exploited the hollowness of President Obama and Secretary Clinton’s “pivot” to Asia and the regime poses a serious challenge to American interests. In order to push back against China’s growing assertiveness, the U.S. must rebuild our defenses in Asia, develop a cyber deterrent that punishes China for its hacking, and continue to cultivate a coalition of free Pacific nations that stand for democracy, peace, and open markets. We must also stand up for human rights and speak out against the abysmal lack of freedoms in China.

At the same time, we do not seek conflict with Beijing, and there are several areas where we both stand to benefit from close cooperation, from trade to dealing peacefully with the North Korean threat. But the truth is, conflict in the Asia-Pacific region will be less likely if China understands that we are ready to defend our national security interests and those of our friends and allies.

Keck: Finally, what do you see as the greatest national security threat to the United States in the short and long-terms?

Walker: The greatest short-term national security threat to the United States is radical Islamic terrorism. By standing idly by as chaos engulfed Syria and by withdrawing American troops from Iraq, President Obama’s policies resulted in the rise of ISIS. Tens of thousands of foreign fighters and jihadists are now gaining combat experience, becoming even more radicalized, and integrating into the global terror network. The immediate danger is that these jihadists will direct their extremism and recently-acquired skills at the American homeland, whose values and freedom stand for everything the terrorists hate.

In the long-term though, the greatest threat to our country is the lack of leadership that has characterized President Obama and Secretary Clinton’s foreign policy in Europe, Asia, and especially, the Middle East. Our allies do not trust us, and our enemies do not fear us. This is creating a world in which Putin invades Ukraine and annexes neighboring territory, China attacks us in cyberspace, Iran dominates the Middle East and threatens Israel, and Saudi Arabia considers whether to acquire nuclear weapons because we have abandoned the region to Iranian influence. The next president must be fully committed to addressing both these short-term and long-term threats.