Scott Walker: Ready for a 2016 Takeoff or Crash Landing? 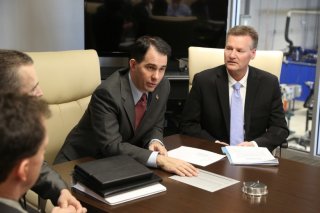 Wisconsin Gov. Scott Walker has emerged as a top-tier candidate for the 2016 Republican presidential nomination at this very early stage. After a well-received speech to Iowa conservatives that defied the conventional wisdom that he's too boring, he now has the lead in the early polls of the state's potential GOP caucus-goers.

So I am going to commit a major violation of pundit code here and admit to underestimating Walker a bit. I always thought he was a strong candidate on paper: a conservative governor of what can fairly be described as a blue state who has won three elections (including the recall) despite taking the left's best shot in each of them.

Chris Christie has yelled at union members in town-hall meetings. Walker has beaten them at the ballot box when his defeat was one of their top political priorities.

But some politicians are admired by conservative elites and never catch on with the grassroots. This includes even iconic Republicans like Jack Kemp, as well as fairly consequential ones like Phil Gramm. Remember Bret Schundler and Bill Owens? You probably don't, even though National Review once called the latter "America's best governor."

All of them were more likely to make the cover of a conservative magazine than to make it out of Iowa with a realistic path to the Republican presidential nomination. Fellow Wisconsin native Paul Ryan probably fit into this category too, until he was Mitt Romney's 2012 running mate.

I suspected Walker might share Kemp and Gramm's fate. Things can change—Herman Cain and Michele Bachmann once looked like they could win Iowa; Mike Huckabee and Rick Santorum once looked like no-hopers in the caucuses; Rudy Giuliani spent most of 2007 sitting atop national polls of Republican primary voters—but it looks like I was wrong.

More consequentially, I recently speculated that Walker was better positioned than other leading Republican candidates to walk the fine line between the rising libertarian wing of the party represented by Rand Paul and the more hawkish elements on contentious issues like foreign policy and civil liberties.

No sooner did I put that column to bed than did libertarian-leaning Republicans from Wisconsin flood my inbox with missives explaining why I was wrong. Since then, Walker has certainly not given any indications he thinks about foreign policy any differently than Romney.

That is, Walker sounds conventionally hawkish, but is just circumspect enough to leave open the possibility he might not have boots on the ground everywhere, a la John McCain and Lindsey Graham. Walker is certainly getting praise from commentators closer to McCain and Graham on foreign policy, which isn't a good sign.

Having admitted error on Walker twice, readers might take the following with a grain of salt. But I do think Walker has some vulnerabilities.

Since it seems unlikely that congressional Republicans will succeed in rolling back Barack Obama's executive amnesty (there's only a slightly better chance the courts might), immigration is going to be on the base's minds. This will emerge as a big wedge issue in the primaries.

For a while, GOP candidates can get away with saying they oppose executive action and whatever else either Obama or Hillary Clinton are for. But eventually, they will have to spell out the substance of their own immigration views.

Walker has in the past signaled an openness to a path to citizenship—i.e., amnesty—and increased immigration. The latter issue has fallen out of the political debate, but perhaps not forever. Only 7 percent of Americans polled by Gallup in January said they were dissatisfied with the current level of immigration because they wanted more of it.

According to the poll, 84 percent of Republicans are dissatisfied with the country's immigration levels and nearly two fifths of U.S. adults want an immigration decrease.

Why does this matter? Well, somebody is going to challenge Walker on these issues to claim the mantle of the conservative candidate in the primaries. The biggest openings to the right of Jeb Bush are on immigration and Common Core. Walker will have to find a way to exploit them.

Yes, McCain managed to win the nomination in 2008, despite being out of step with the base on immigration. So did George W. Bush in 2000. But they were establishment candidates.

Let's see if he can prove me wrong again.