Scott Walker Is Right on Iran 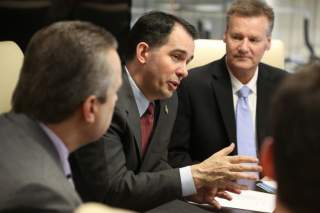 Some pundits have supported Bush’s caution and disparaged Walker’s statement as “lacking nuance” but in reality, Walker’s position is correct. Why?

(Full disclosure: both of us have briefed Walker.)

There are actually two separate issues to be addressed here. First, will a new president be able to judge the Iran deal as a failure on his or her first day in office? Second, will a new president be in a position to terminate the deal on day one? The answer to both of these questions is not only yes, but that doing anything else would be irresponsible.

First, the Iran deal does not protect U.S. interests and one does not need access to classified intelligence briefings to understand this basic fact. Let us recall that this is perhaps the foremost national security question of our time. U.S. policy on this issue will do much to shape the Middle East, the nonproliferation regime, and the world our children and grandchildren will inherit. The deal allows Iran to become a nuclear weapons threshold state, lifts conventional arms and ballistic missile embargoes, and provides over $140 billion to the world’s largest state sponsor of terror. If the deal simply does what it is designed to do, it will be an easy call for the next president to judge it a failure well before taking office.

Second, there is much the president can and should do to begin the process of terminating the Iran deal on day one, and even before. This is not a question of formalities, such as whether a Secretary of State has been confirmed. Only one question matters: is dismantling this deal a priority or not? The candidate’s policy team can even now begin developing a comprehensive strategy for walking away from and improving upon the existing Iran deal. The candidate and his top advisers can begin meeting with representatives from allies and major powers before and during the transition to explain the new direction in which they plan to take America’s Iran policy. The new president can announce America’s new Iran policy in his or her acceptance speech and in the inaugural address. The new president can, on day one, sign an executive order to enforce some American sanctions already on the books. And the list goes on.

Moreover, not only will a new Republican president be in a position to telegraph his or her Iran policy well before inauguration day, he or she has a responsibility to do so. Everyone knows undoing the damage from this deal will not be easy, but Governor Walker’s strong language clearly conveys the essential message: this deal will not stand.

Every top-tier Republican candidate, including Governor Bush, has promised to increase economic pressure on Iran. The process for making that happen begins now. The effectiveness of sanctions against Iran depends largely on expectations. If the business community believes that the Iranian market will be permanently open for business, contracts will be signed, trade and finance will begin to flow, and it will be difficult to reverse these trends later. If, on the other hand, there is an even chance that U.S. sanctions will be re-imposed in 18 short months, many will stay away. Money is a coward.

Statements of irresolution, therefore, inadvertently boost the Iranian economy and buttress Obama’s bad deal. They also undercut members of Congress who are fighting to terminate the pact now, before more damage is done.

Confirming a Secretary of State, working with allies, and receiving intelligence briefings are important, but it is hard to see how these processes could veto a president’s top national security priority. A new president will be unprepared if he comes to office still undecided about the foremost foreign policy challenge of our time.

Some pundits argue that if Governor Walker were to terminate the Iran deal on day one, the Iranians would respond by kicking out the inspectors and sprinting for the bomb. That, too, is a misreading of how the world works. If the Iranians see that the new president is resolute and prepared to follow through on his threats, fear of consequences will make them less rather than more aggressive.

We have seen this before. In 1980, the American people elected a president with a reputation for resolve and on day one of Ronald Reagan's presidency, literally as he took the oath of office, the Iranians released the hostages that they had been holding prisoner for 444 days. The time to show leadership on Iran is now, not after one gets settled into the position.

As Governor Walker said in a press gaggle this weekend in Iowa, “I believe that a president shouldn’t wait to act until they put a cabinet together or for a certain period of time… I’m going to be prepared to be president on day one."